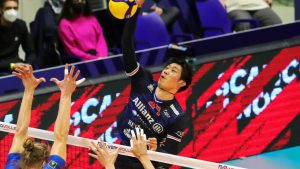 Allianz Milan extended their winning streak in Italy’s domestic competitions to five back-to-back victories with a 3-0 (25-22, 25-16, 25-22) away shutout of Vero Volley Monza in one of the two SuperLega Credem Banca matches of the 15th leg postponed to Wednesday, January 26. Allianz are still undefeated in 2022, after winning three league games in early January and upsetting Cucine Lube Civitanova in a cup quarterfinal 10 days ago.

Japanese international Yuki Ishikawa was the main point-maker for the visiting team from Milan. He contributed 13 points, including an ace and 12 spikes at a 55% success rate in attack, while handling well 62% of the opponents’ serves directed at him, and he was named MVP of the game. Allianz’s blockers made the big difference in the match, scoring eight stuffs against only one for the opponents. Four of those came from French national team middle Barthelemy Chinenyeze. Czech international outside hitter Donovan Dzavoronok delivered the match high of 17 points for the hosts in Monza. 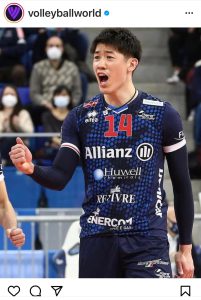 With that win, Allianz moved into the fifth place in the current standings on 26 points and a 9-6 win-loss record, while Vero stayed in seventh on 22 and 8-9.

“I’m happy because we won the game on a clean slate, but mostly because we played well. We never lost concentration, we always kept a high level throughout the match, we never gave up… In my opinion, we played cleanly tonight and this is very important, especially in view of the upcoming match against Sir Safety Conad Perugia. It will be important to arrive with the right mentality and with confidence on Sunday.”

In the other game on Wednesday evening, Gioiella Prisma Taranto made sure their visitors from Consar RCM Ravenna remain winless since the start of the season. In a 3-0 (25-19, 25-20, 29-27) straight-setter, 2021 U21 world champion with Italy Tommaso Stefani topped the scorers’ chart of the match on a 19-point tally, including two aces and three kill blocks, while his teammate Luigi Randazzo chipped in with another 17 points towards the victory. Dutch opposite Niels Klapwijk led Consar’s scorers, producing four aces towards a 15-point match tally.

It was Gioiella’s fifth win in 16 matches, which lifted the team to the eighth position in the table on 18 points. Consar are stuck at the bottom of the standings on two points and a 0-14 record. 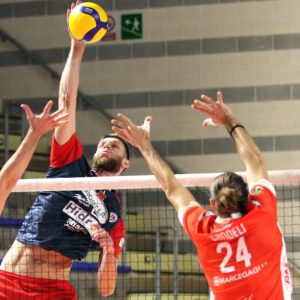 Next on the agenda is Saturday’s game between Top Volley Cisterna and Verona Volley, postponed from the 16th leg, followed by all six matches of the 19th leg on Sunday.

Watch all the matches of the Italian men’s and women’s top-division leagues live or on demand on VolleyballWorld.tv.

Get all the results, statistics, schedules and more in Volleyball World’s SuperLega 2021-2022 site.