Manama, Bahrain, July 26, 2019 – Italy and Iran came up with impressive victories in the semifinals on Friday to reach the title match of the 2019 FIVB Volleyball Men’s U21 World Championship.

In the first semifinal match, Italy made up for their height disadvantage with great ball placement and smart plays, overcoming their European rivals Russia 3-1 (24-26, 25-19, 25-22, 25-21) to reach the U21 World Championship final for the fourth time.

The Italians’ excellent ball placement on the serve disrupted the Russian defence, which allowed them to grab the lead in the opening set. However, Russia got their rhythm on offence back and tied the game at 24-all, until Pavel Tetyukhin’s attack plays gave them the set win at 26-24.

Italy continued to come up with smart plays at the net, while Russia relied on their opposite hitter Maksim Sapozhkov to power their offence. The Italians stuck to their game plan by executing well-organised offence and defence to clinch the victories in the next two sets at 25-19 and 25-22, respectively.

In the fourth set, Sapozhkov drilled a number of spikes that allowed the Russian side to hold on to the lead until Italy made a brilliant run to tie the score. Then suddenly the Russians lost their momentum with a string of errors on the attack and finally a service error by Vitali Dikarev gave away set and match to the Italians 25-21.

Sapozhkov topped all scorers with 29 points, but the great teamwork of Italians’ Francesco Recine (18), Kristian Gamba (15) and Daniele Lavia (15) were good enough to upstage their rivals.

In the other semifinal encounter between Brazil and Iran, the latter came up with a straight-set (25-20, 25-14, 25-17) triumph, with Porya Yali and Amirhossein Esfandiar running the show with 18 and 14 points, respectively. Victor Aleksander Almeida Cardoso was the only player from the Brazilian side who hit the double-digit mark with 10 points.

Iran gave no chance for Brazil to set up their plays with their powerful serves. The Iranians tallied nine aces and were also more prolific in attacks (38-30) and blocks (5-3) than the Brazilians.

Iran now have the chance to improve on their bronze medal finish, which they achieved since they first joined the World Championship in 2007.

The title match between Italy and Iran is scheduled at 19:00 local time, after the bronze medal match between Russia and Brazil at 15:00.

Meanwhile, China and Argentina will play for fifth place, following their respective straight-set victories against hosts Bahrain and Korea.

China defeated the host team 3-0 (25-23, 25-18, 25-18 battle) in the all-Asian battle. The visiting side had better teamwork on offence as Xiu Chencheng and Zhai Deijun formed the tandem that overwhelmed their rivals. Xiu and Zhai combined for 27 points, while Bahrain only had Mahmood Abdulhusain scoring beyond the 10-point mark.

On defence, the Chinese mounted a great wall, intimidating their rivals. China had a total of 11 blocks, with Qi Qi and Zhang Dongzheng dominating that category with four and three blocks, respectively.

Argentina played excellent defence against Korea to win 3-0 (29-27, 25-21, 25-21). They South Americans had 12 blocks – eight coming from their top scorer and middle blocker Nicolas Zerba, who finished with 13 markers. His teammates Luciano Palonsky and Federico Jose Seia fortified the Argentine offence with 12 points each. The Koreans had better scoring output with Lim Sungjin as he posted a match-high of 15 points, and Im Donghyeok and Joung Hanyong each made 14 points on a losing effort. 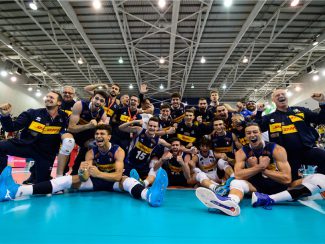