Veterans Varapatsorn and Tanarattha bursted into prominence in 2013 following their unprecedented title in the Palembang Open in Indonesia and after that succeeded on international stage including silver medal at the 2014 Asian Games in Incheon, Korea and gold medal at the 2016 Asian Beach Games in Da Nang, Vietnam. 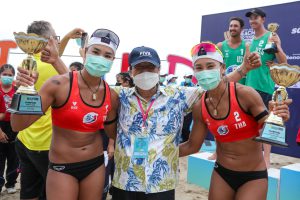 The Sunday’s success of Varapatsorn, 34, and Tanarattha, 33, augurs well that they remain a strong force for Thailand to be reckoned with in upcoming tournaments including this year’s Vietnam-hosted 31st Southeast Asian (SEA) Games and the 19th Asian Games in Hangzhou, China. In the Sunday morning’s semifinal clash against Australians Alisha Stevens/Caitlin Bettenay, the Thai pairing surged away to pull off a scintillating 2-0 (21-16, 21-13) win in strong fashion and secure a place in the final showdown. Despite only joining up as a team early this year, Stevens and Bettenay have a very promising future. As Bettenay, at the age of 17 at that time, became the youngest player to make the Senior Australian Women’s Volleyball team, Stevens also made her mark to capture the back-to-back titles in Thailand last year with victories in the Asian U19 and U21 Beach Volleyball Championships. 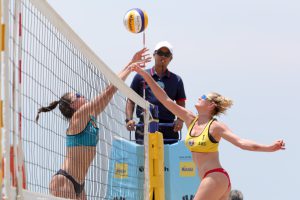 Following the loss, Stevens and Bettenay battled it out for the bronze medal against Canada’s Amanda Harnett/Alina Dormann, who went down 0-2 (19-21, 20-22) to Japanese Ren Matsumoto/Non Matsumoto in the other semifinal encounter. Stevens and Bettenay, who shocked defending Asian champions Taravadee Naraphornrapat/Worapeerachayakorn Kongphopsarutawadee from Thailand 2-0 in the quarterfinals earlier, fought well in the third-place playoff, but just let the bronze medal slip through their fingers.

The Aussies won the opening set 21-15 against Harnett/Dormann, but lost the close second set 20-22 and still went down to the well-organised Canadians 9-15 in the decider to finish fourth place in the Futures Songkhla.

Harnett and Dormann, who in the quarterfinals earlier stunned the 2018 Asian Games bronze medallists Dhita Juliana/Putu Utami from Indonesia, had to be content with bronze medals and US$500 cash prize. 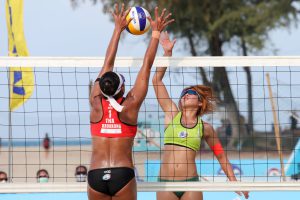 The thrilling final clash between Thailand’s Varapatsorn/Tanarattha and Japanese Ren/Non saw the irresistible former too strong for the latter to wrap up the highly-anticipated match in comfortable two sets 21-16, 21-12 for the eventual title and US$1,000 cash prize. The Japanese duo took home silver medals and US$700 prize money. Meanwhile, Miles Evans/Andrew Benesh struggled to beat Kiwis Thomas Reid/Ben O’Dea 2-1 (22-20, 19-21, 15-8) in the semifinals to book a final berth in the men’s event, where they were due to take on Carlo Bonifazi/Davide Benzi. 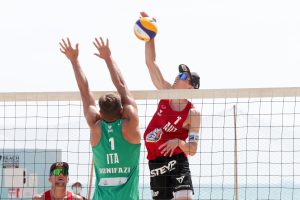 The Italians also faced the similar fate in the other semifinal match, where they were forced to play a hard-fought encounter before a comeback 22-24, 21-19, 16-14 win against Austrians Julian Hori/Alexander Horst. In the men’s final showdown, the 190cm-tall Bonifazi and the 181cm Benzi, who claimed gold medal at the Zonal Tour event in Sausset-Les-Pins, France last year, played well in a high-octane game against Evans/Benesh to narrowly edge the American challengers in closely-contested 2-0 (27-25, 21-19) for the title. 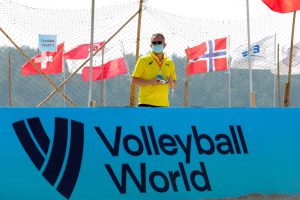 After the closing ceremony, Mr Somporn Chaibangyang, President of Thailand Volleyball Association, who presided over the ceremony earlier, FIVB Technical Delegate Mr Oguz Degirmenci from Turkey and Tournament Director Mr Kritsada Panaseri expressed their thanks and appreciation to court officials and volunteers for their excellent cooperation and tireless dedication which helped make the four-day event a remarkable success. The day at Samila Beach ended with  photo opportunities of happy participants. 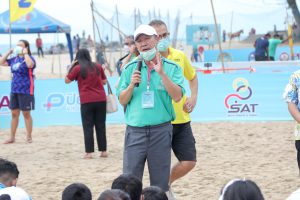 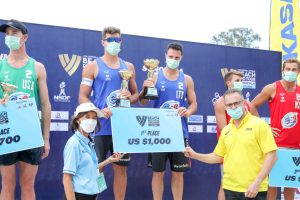 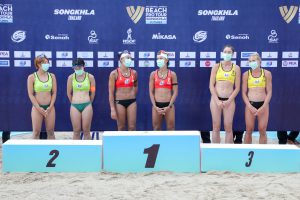 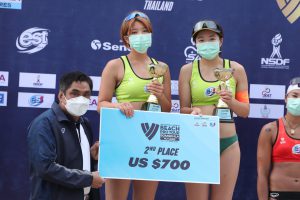