The Hisamitsu Springs were declared the champions among the women

The Suntory Sunbirds had a challenging task entering the last day of the 2021-2022 Japanese V. League’s season on Sunday, but they never lost faith and were rewarded with a ninth national title in their club history and the second in consecutive seasons.

After losing the first leg of the Finals in straight sets to the Nagoya Wolfdogs last weekend, the team from Suntory needed to win not only their second encounter at the Chiba Port Arena, but also a golden set to retain the title they had won in the 2020-2021 season.

Russian opposite Dmitriy Muserskiy was instrumental in the Sunbirds’ reaction as the 2.18m-tall Olympic champion produced 17 points (14 kills, three aces) in the second leg of the final and added eight more (all in kills) in the golden set, including the championship-winning decider.

Wolfdogs’ Polish star Bartosz Kurek was the top scorer of the match with 20 points (19 kills, one block) and tallied another seven (all in kills) in the golden set, but his efforts weren’t enough to secure his team their second national title. 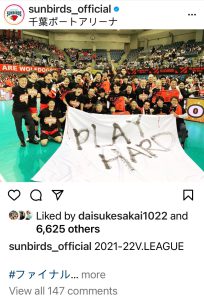 Sunbirds’ setter Masaki Oya, who was part of Japan’s roster during the 2021 Volleyball Nations League, was awarded as the league’s MVP for the season. He and Sunbirds’ outside hitter Masahiro Yanagida also made it into the V. League’s Dream Team, where they joined Wolfdogs’ Kurek (opposite), Kenta Takahashi (outside hitter) and Tomohiro Ogawa (libero), Panasonic Panthers’ Akihiro Yamauchi (middle blocker) and Toray Arrows’ Kentaro Takahashi (middle blocker).

The second leg of the women’s V. League Final, which was scheduled to take place on Saturday, reuniting the Hisamitsu Springs and the JT Marvelous, ended up being canceled after players from both teams returned positive Covid results during the week.

With that, the Springs, who had won the first leg of the Finals 3-1, were declared the champions and took home their eighth national title and their sixth in 11 seasons. 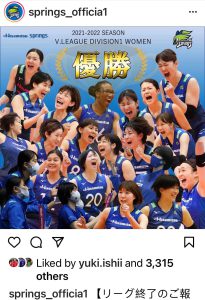 The V. League has already confirmed the start dates for its 2022-2023 season. The men will play their first matches on October 22 while the women will take to the courts a week later.