ITALY CROWNED U20 CHAMPIONS, AS THAILAND FINISH 14TH AFTER GOING DOWN TO BELGIUM

Home / Slider / ITALY CROWNED U20 CHAMPIONS, AS THAILAND FINISH 14TH AFTER GOING DOWN TO BELGIUM
By PreechachanIn
Slider Volleyball News

Italy were crowned champions at the 2021 FIVB Volleyball Women’s U20 World Championship after defeating Serbia in three sets on Sunday. In the bronze medal match, Russia delivered a thrilling 3-2 victory over the Netherlands coming back from two sets down and saving as many as six match points in the process.

In the match for gold, Italy felt the sweet taste of success after finishing the Worlds without a single loss.

Italy dominated on all counts in the first set, not allowing the Serbians to show their full potential. Serbia’s captain Vanja Savic suffered a wrist injury with the score at 19-9, and had to leave the court.

It was a similar story in the second set. The Italians controlled the game and although the Serbian players sped up on spiking, an impeccable performance at the block helped Italy to take a 2-0 lead.

It was a close call in the third set as Serbia improved their defence. Serbia’s libero Bojana Gocanin saved several spectacular balls. The Balkan team even took the lead at 17-16, and breathing down Italy’s necks, kept the intrigue alive until the last referee whistle. However, Italy again gained control. Serbia saved two match points, but Italy were merciless.

Statistically, Italy were the better team in all areas of the game. Giorgia Frosini and Loveth Omoruyi scored 11 points each. Branka Tica recorded 12 winning spikes.

“I don’t have any words to describe the emotion! Becoming champions of the world is something that we have been dreaming of for such a long time! Throughout the whole competition, we have been able to keep our faith alive. Since we started preparation for this championship, we knew that we could achieve our goal. It is a dream come true! This group of players deserves this title,” Gaia Guiducci, MVP and Best Setter of the competition, said.

Russia and the Netherlands met in the previous stage of the FIVB Women’s U20 World Championship, when the Dutch disappointed the Russians with a 3-1 win.

In a dramatic re-match on Sunday, the Dutch were well in control of the first set, outperforming the Russians on all counts. Russia recovered their rhythm, pushing hard on the serve, but the Netherlands found their opponents’ weak spot to take a 2-0 lead.

Russia then took control of attack to tie the set score. Two aces at 6-6 gave the Netherlands an 8-6 lead in the fourth set, but the players of Igor Kursonov turned things around. They performed exceptionally well in defence, and took advantage of the Dutch mistakes to take the match to a tiebreak.

In a thrilling fifth set, with both teams sharing the lead at different times, the Russians saved as many as six match points, to eventually emerge victorious. 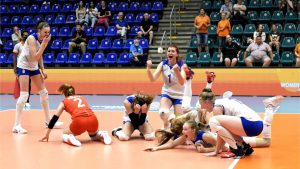 It was a better performance in spiking that was the difference for Russia. They fired as many as 67 successful attacks. The Netherlands on the other hand proved better at the block (14) and on the serve (13 aces). Russia’s opposite, Vita Akimova was unstoppable with 35 points to her name.

Meanwhile, Thailand, the only Asian team contesting the U20 World Championship, went down to hosts Belgium in hard-fought three-setter 20-25, 20-25, 19-25 in the 13th-14th playoffs in Kortrijk on Sunday. 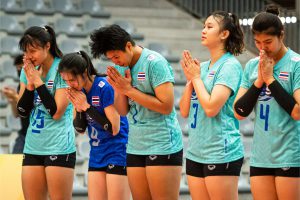 Suphatcha Khamtrareaksa, setter and captain of Thailand: “We are so happy to be here. We earned a lot of experience. We’ll take every experience that we got here back to Thailand and it will help our team to be better.” 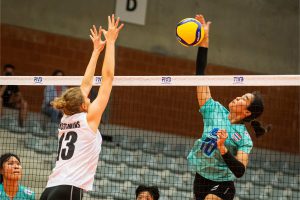 Luna Van Acker, setter and captain of Belgium: “I am very happy that my team played this well, because we worked hard for this and it’s nice to win at the end.” 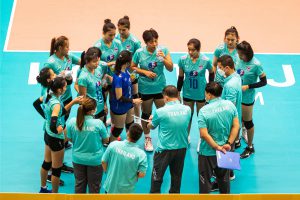 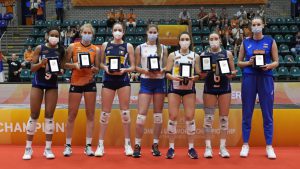