As beach volleyball prepares to grace Tokyo Bay for its seventh appearance at an Olympic Games, the most charming sport on the programme celebrates 25-years since its Olympic debut at Atlanta 1996.

From humble beginnings on Californian beaches in the 1920s and 30s (although rumour has it that the sport was played as early as 1915 in Hawaii), beach volleyball has since risen meteorically to become a globally recognised and loved sport. The sport’s Olympic legacy began in Atlanta 1996 and was an instant hit among sports fans. The 10,000-seat stadium saw capacity crowds with more than 107,000 spectators selling out the six-day event.

It was in fact Australia’s Natalie Cook and Kerri Pottharst who wore the world’s first Olympic beach volleyball medals after winning the bronze-medal match. The Australian duo did not have to wait long for gold, however, after emerging victorious at their home Olympics of Sydney 2000. 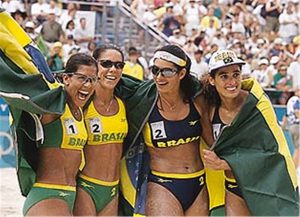 To this day, Karch Kiraly is the only player to win Olympic gold in both indoor volleyball (Los Angeles 1984 and Seoul 1988) and beach volleyball. A legend on both sand and indoor flooring, Kiraly is now the Head Coach of the United States women’s national volleyball team which will head to Tokyo as Volleyball Nations League (VNL) 2021 champions and the number one ranked team in the world. 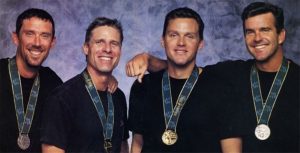 Beach volleyball’s Olympic debut at Atlanta 1996 was a huge milestone for the sport which has featured at every Olympic Games since, with Tokyo 2020 set to be its seventh appearance on the programme. The sport continues to experience non-stop growth and is now among the most-watched and most popular events at the Games.

And while the USA and Brazil remain dominant forces in beach volleyball, having jointly taken a medal haul of 23 of 36 total medals in Olympic beach volleyball, the competition from around the world becomes stronger every year. Across London 2012 and Rio 2016, Europeans claimed four of six men’s podium spots while Germany’s Laura Ludwig and Kira Walkenhorst took gold in the Rio 2016 women’s competition.

Clearly, the popularity and development of beach volleyball continues to advance around the world thanks to the brilliance of the sport, its incredible athletes and the efforts of the FIVB. Now, every edition of the Olympic Games promises to be a celebration of this relatively young but bold Olympic sport, with high-intensity action and cutting-edge sports presentation which is loved by hundreds of millions worldwide.

To read more about the history of beach volleyball, click https://www.fivb.com/en/beachvolleyball/thegame_bvb_glossary/history

LANG PING EXCITED ABOUT TOKYO 2020ITALY CROWNED U20 CHAMPIONS, AS THAILAND FINISH 14TH AFTER GOING DOWN TO BELGIUM