ITALY SHUT OUT USA FOR BRONZE IN WOMEN’S WORLD CHAMPIONSHIP

Italy earned the FIVB Volleyball Women’s World Championship 2022 bronze medals after defeating the United States on Saturday. The reigning Volleyball Nations League and European champions produced an impressive 3-0 (25-20, 25-15, 27-25) shutout of the reigning Olympic champions in the match for third place, played in the Dutch city of Apeldoorn. The Italian ladies have now collected a full set of World Championship medals, also including their 2002 gold and 2018 silver.

The big final between Brazil and Serbia to determine the 2022 world champions and the silver medallists is set to start next, at 20:00 local time (18:00 GMT).

Italy’s 23-year-old star opposite Paola Egonu delivered another high-scoring performance and led her team to victory with a match-high 25 points to her name. She tallied 20 spiking points at a 53% success rate in attack and added four kill blocks and an ace to her record. Her American counterpart Andrea Drews with 10 points was the only other player to reach double digits in the match.

Italy opened the first two-point gap on an Egonu ace for 5-3, but USA levelled it right back, took control and ran off with a four-point lead. The Europeans wiped it out with four consecutive points, including three kill blocks by Egonu and middle blocker Marina Lubian combined, for 13-13. Italian setter Alessia Orro hammered an overpass to put her team in front again at 15-14. With Egonu on fire, the Italians scored four in a row, including an ace by outside hitter Caterina Bosetti for 18-15, to gain a 19-15 advantage and never looked back. Anna Danesi spiked through the middle to bring in set point at 24-20 and a net touch by the Americans closed the first set at 25-20.

With a cross-court swing by Drews for 2-1, the Americans took their first lead of the second set, and with an ace by setter Lauren Carlini for 9-6, they widened it to three points. After a three-point run, with clever plays by Danesi and Egonu in attack, Italy took control at 11-10. Moments later, they achieved another series of five consecutive points for 17-11, and then another four in a row for 21-13. In the epilogue, Italy’s emphatic domination was crowned by two back-to-back aces from Lubian to close the set off at 25-15.

A nip-and-tuck battle unfolded on the court throughout the third set. The lead went back and forth several times. The first time the gap exceeded two points was after an ace by US middle Haleigh Washington for 17-14. With the momentum on their side, the Americans stayed in control. A direct serving point by Drews for 23-20, followed by a monster block from Washington for 24-20, gave them four opportunities to close the set and stay alive in the match. However, with Sylla and Egonu owning the net, the Italians denied all four of them and then another, before taking control in overtime and reaching match point. At the end, a monster block by Danesi for 27-25 set off the bronze medal celebrations.

“We had a dream, but against Brazil we couldn’t play our game. So we came here under pressure, not from outside, but from us, to get a medal and I hope all enjoyed it,” said Sylla after the victory. 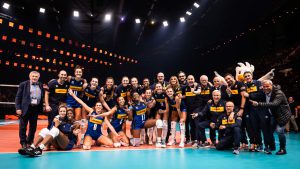 CHERIF AND AHMED BACK ON TOP OF THE PODIUM WITH VICTORY IN THE MALDIVESQATAR WIN A MINI MALDIVES NORTH AMERICAN TOURNAMENT SATURDAY, SETTING UP EPIC BOUT WITH SWEDEN IN SEMIFINALS