Japan showed great strength in the opening week of the Volleyball Nations League 2022. The Asians are the only undefeated team in the tournament after the conclusion of the first 32 matches of the women’s event.

The Japanese won their four matches in Shreveport-Bossier City, USA, and saved the best for last, taking down reigning Olympic and three-time VNL defending champions USA in straight sets (25-22, 25-20, 25-20) on Sunday at the conclusion of their pool.

To upset the number one team in the FIVB Volleyball World Rankings, the Japanese came out with an aggressive serving strategy, which destabilized the American playing system. The team also counted on the excellent performances of outside hitters Sarina Koga and Arisa Inoue.

They produced 19 points each, with Koga, the new captain of the team, tallying 17 kills and two blocks, and Inoue adding 17 kills, one block and one ace.

“We know they are the number one team in the world, so we had to come up with something they wouldn’t expect,” Inoue said. “We tried to make them uncomfortable and confused and we were able to do it from the first set.” 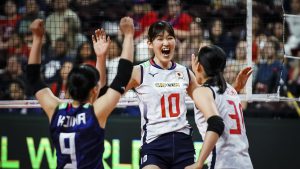 Koga ended the first week of the VNL ranked third in points scored (93) and kills (86). Other individual standouts in the team led by Manabe Masayoshi were libero Manani Kojima, first in digs with 78, and setter Nanami Seki, third in the position’s ranking with 67 positive actions.

In the second week of the women’s VNL, from June 14-19, the Japanese will face Poland, Bulgaria, Thailand and China in Quezon City, the Philippines.