12 men’s and 12 women’s teams set to compete at Commonwealth Games from 30 July to 7 August in Birmingham, UK

Birmingham 2022 have confirmed the pools for the beach volleyball tournament at this year’s Commonwealth Games after the draw was officially completed earlier this month.

Birmingham 2022 will mark beach volleyball’s second appearance at the Commonwealth Games after the sport made its successful debut at the multi-sport competition four years ago in the Gold Coast, Australia.

The matches which will be held in a purpose-built venue at Smithfield, in the centre of Birmingham, will take place from 30 July with both the men’s and women’s medal matches being held on Sunday 7 August.

In the women’s competition, England, the host nation, has been drawn against home nation rivals, Scotland. They will be joined in this pool by the bronze medal winners from Gold Coast 2018, Vanuatu, and Commonwealth Games debutants, the Solomon Islands.

The other two pools will also see some great matches with reigning champions Canada up against New Zealand, Kenya and Ghana in pool A and Australia, who took home silver last time around, will be facing Cyprus, Trinidad and Tobago and Sri Lanka.

In the men’s competition, Team England will take on Gold Coast 2018 bronze medallists New Zealand, as well as Cyprus and Tuvalu in pool C. The reigning champions Australia have been drawn in pool B where they will face three teams all making their Commonwealth Games debuts: Rwanda, South Africa and the Maldives.

Canada, who secured the silver at Gold Coast 2018, will be facing teams from The Gambia, St Kitts & Nevis and Sri Lanka.

“With Birmingham 2022 now less than two months away, the pathway to becoming Commonwealth beach volleyball champions is becoming clearer for the teams and I am sure they are all focused on preparing for this important event.

“The pools that have been drawn will ensure intense and competitive match-ups from the preliminary phase all the way to the final, showcasing the very best of our sport to existing fans and new audiences alike.”

“We can’t wait to welcome the beach volleyball teams to Birmingham and it’s clear from the draw that there will be some hugely exciting pool matches during this tournament.

“The Smithfield site, where the beach volleyball matches will be played, will be a hive of activity during the Games, as right next door to this venue is the Basketball 3×3 and wheelchair basketball 3×3 court.

“We know that there will be a fantastic atmosphere at Smithfield during the Games so if you don’t want to miss out on seeing some superb sporting action in an iconic Birmingham 2022 location, then now is the perfect time to purchase your tickets.”

The pools can be found below: 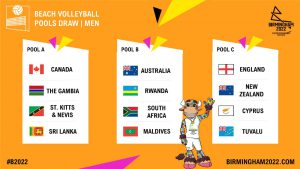 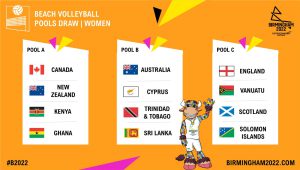 Tickets for the Birmingham 2022 Commonwealth Games have been selling fast but there are still some tickets available for the beach volleyball tournament. Find out more at www.birmingham2022.com