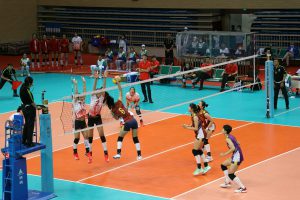 The first set saw both sides exchange points till 9-9 before Jiangsu geared up to a 13-9 lead. Tianjin requested a timeout but they failed to decelerate their opponents instead of seeing them off to the first set win 25-15 following an ace.

Benefiting from their height advantage, Jiangsu started the second set with a scoring wave to set up an 11-3 lead and they soon closed the set by a wide gap 25-14.

With no way to retreat, Tianjin fought their utmost in the third set. Under the pressure opposed by Tianjin, Jiangsu committed several mistakes and were left behind 7-10. After the timeout, Jiangsu organised several chasing-ups relying on their blocks and counterattacks but still allowed Tianjin to reach the set point 24-22. Though saving two set points, they made another two fatal errors in service and reception successively to see Tianjin take back a closely-contested set 27-25.

Jiangsu played the fourth set with more concentration and they made best use of the opponent’s errors to establish a 15-9 lead in the mid-set. With their efficient blocks and counterattacks, Jiangsu allowed no more chance to Tianjin before they soon closed the set 25-12 and match. 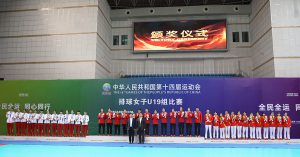