Wolfdogs with a two-match advantage for last playoff berth

Entering the last weekend of February in Japan’s V1 Men’s League, the race to the playoffs is getting closer and appears to be a battle between Wolfdogs Nagoya and the JTEKT Stings for the last playoff spot.

Suntory Sunbirds (first place) and Panasonic Panthers (second place) built gaps over Nagoya before the weekend and look to clinch their playoff berths in a couple of weeks.

While the superstars of Bartosz Kurek and Yuji Nishida for Nagoya and JTEKT respectively are often the dominant player in their teams, others are performing to try and guide their teams to the playoffs.

Last week, we profiled Felipe Fonteles for JTEKT, but this week we will talk about outside hitter Kenta Takanashi for Nagoya. The 190 cm Takanashi is in his third season for Nagoya and joined the team after playing in college at the Nippon Sport Science University Setagaya Campus in Tokyo. Takanashi also played for Japan in the FIVB Volleyball Men’s U23 World Championship, where Japan finished sixth.

At the end of play at the weekend, Takanashi was 16th in the league with a kill percentage of 48.8% and ninth in scoring with 406 points in 93 sets played.

Teammate Kurek is the league leader with 671 points with 87 sets played.

JTEKT Stings needed to keep pace with the Wolfdogs, but split their weekend series with FC Tokyo. On Saturday, the Stings swept their opponents 3-0, but on Sunday FC Tokyo used a 12-6 blocking advantage to sweep the Stings 3-0. The loss pushed JTEKT two games behind Nagoya in the battle for the last playoff spot with 10 matches left.

Lastly the Toray Arrows and Sakai Blazers went five sets in both matches in their weekend series. On Saturday, Toray used a Haku Lee spike to end the match 3-2. While on Sunday the Blazers needed to go extra points in the fifth set to win 16-14 on a Yukiya Uno kill. Sakai finished the weekend in fifth place, but have played three more matches than Toray in sixth place. 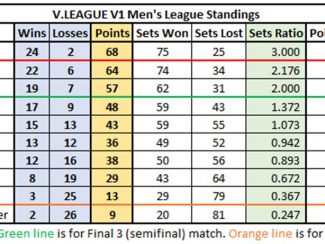