KING OF THE COURT RETURNS AS FIRST POST-LOCKDOWN INTERNATIONAL EVENT

King of the Court, the first international event sporting event in the Netherlands since lockdown, will be held in a purpose-bulit venue in Utrecht, designed to respect social distancing rules

Lausanne, Switzerland, June 29, 2020 – The first international sports event on Dutch soil since the outbreak of the coronavirus pandemic will be played on the Jaarbeursplein in Utrecht, as the ‘King of the Court’ beach volleyball tournament returns, September 9-12.

The best men’s and women’s beach volleyball teams of the world will travel to the city in the centre of the Netherlands where they will lock horns for the first time since March. Sports event agency Sportworx, which organizes King of the Court in collaboration with the FIVB and the Dutch Volleyball Federation, presented the detailed plans this morning in Utrecht.

FIVB President Dr Ary S. Graça F° joined the press conference via a video message in which he said:

“On behalf of the FIVB we are glad to have supported Sportworx for several years now with the thrilling King of the Court Series. The project presents beach volleyball in a completely different format, and I believe it has great potential.”

“In these challenging times, this tournament in the Netherlands will be the first international FIVB-sanctioned competition since the start of the global pandemic. And we welcome the efforts of the organisers and the Dutch government in hosting the event but also ensuring the health and well-being of the athletes and all other participants.”

The last time the international beach volleyball top played on the FIVB Beach Volleyball World Tour was in early March at the four-star tournament in Doha, Qatar. Since then, all tournaments have been canceled or postponed due to the pandemic. In recent months, Dutch and foreign teams have only been able to train.

Innovative stadium
A stadium will be built on Jaarbeursplein in September, providing an innovative space for the public, while guaranteeing social distancing rules.

The entire stadium consists of sky boxes constucted from building materials. The sky boxes are available for 2 to a maximum of 10 people and are reserved in advance. In this way, hundreds of spectators can safely enjoy top beach volleyball. 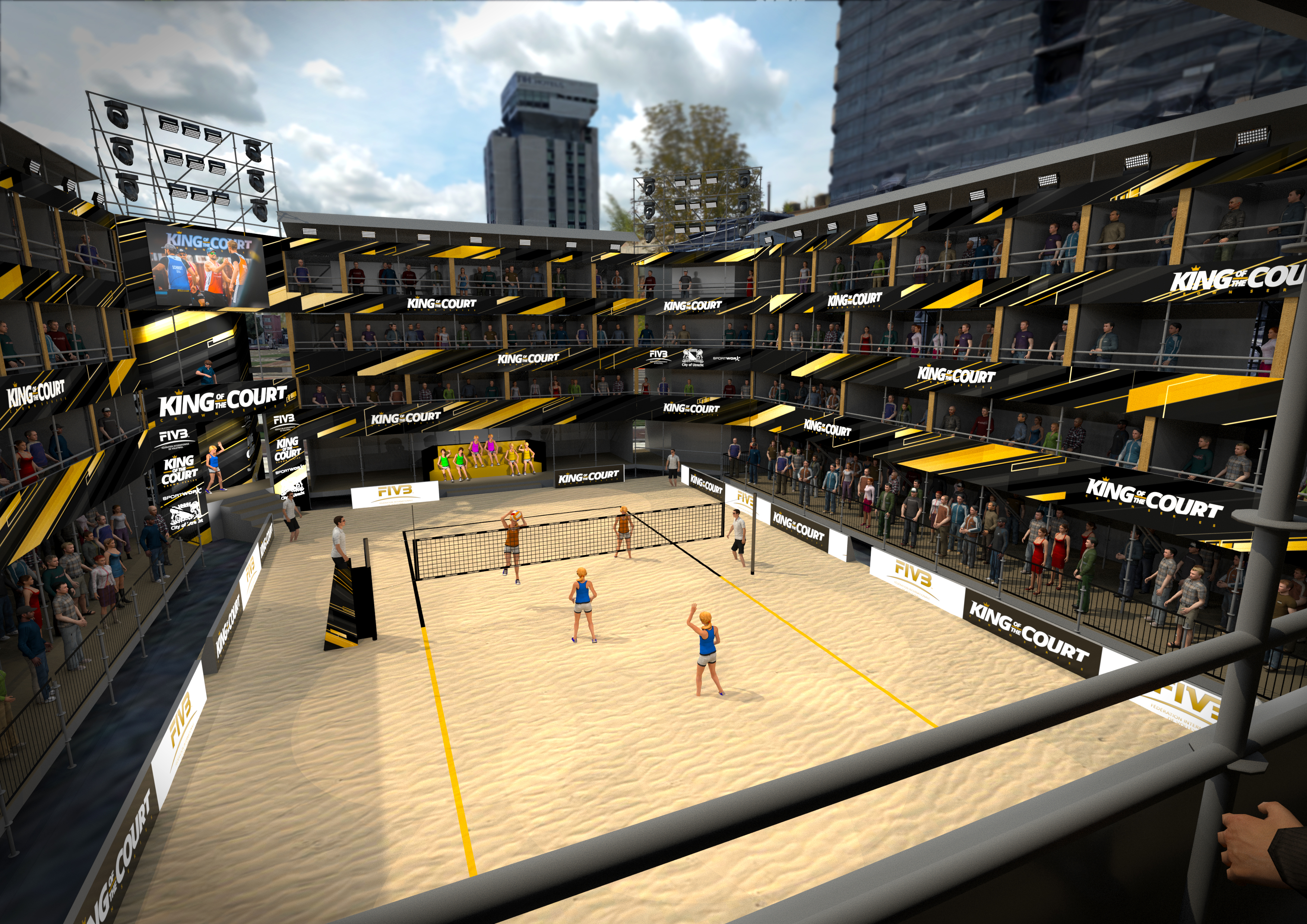 Artist’s render of the purpose-built court in Utrecht to host King of the Court in September, with specifications for social distancing.

A total of 30 teams per gender participate in King of the Court.

In 2018, Sportworx organized the first international King of the Court tour of four tournaments, in Utrecht, Antwerp, Hawaii and California.

The ambition is to make King of the Court an Olympic volleyball discipline in the near future. This development would fit in with International Olympic Committee’s policy to embrace new, fast-paced sports that capture the imaginations of youthful generations.

“On behalf of the FIVB we are glad to have supported Sportworx for several years now with the thrilling King of the Court Series, President Graça has said. “The project presents beach volleyball in a completely different format, and I believe it has great potential.”

“We will continue to bring new concepts and ideas to the sport to ensure the best possible experience for both the athletes and spectators,” added the FIVB President. The positive feedback we have received so far from the players and all the other stakeholders proves the importance on the series. King of the Court provides more opportunities for athletes to play in a very exciting and competitive competition format.”

“We hope King of the Court will be in the Olympics also and it will be a lot of fun to play for another medal. We love playing in the Netherlands,” said Anders Mol during today’s presentation.

“We really like the format of King of the Court. It is a new trend and the future for sport,” added Christian Sorum. “In ‘normal’ beach volleyball you have some good rallies and it’s fun to watch. But with King of the Court you have every rally, all the time. The atmosphere with the fans and the players is just amazing. So much fun.”

Ticket pre-registration now open
From now on it is possible to register for the ticket sale of King of the Court Utrecht on kingofthecourt.com.