Lang Ping was nicknamed the Iron Hammer, but in her amazing volleyball career, she hammered out neck decorations mostly made of more precious metals like gold and silver. Currently serving as a member of the FIVB Technical & Coaching Commission, the Chinese sporting legend achieved huge success on the volleyball courts as a player and a coach. She was the sport’s first person in history to win Olympic gold in both roles, and this was just one of many glorious achievements the Iron Hammer nailed in her career.

Lang Ping was born in Tianjin in 1960. Initially, she wanted to play basketball, following in her sister’s footsteps, but she was advised to take on volleyball instead. At the age of 12, she was selected into the volleyball class of the Beijing Workers Gymnasium Sports School. In 1976, she was already a member of the Beijing women’s volleyball club to get her senior competitive career underway. Just two years later, in 1978, Lang was selected for the first Chinese national team.

That same year, Lang Ping and her teammates achieved their first big medal, an Asian Games silver, followed by a 1979 Asian Championship gold. 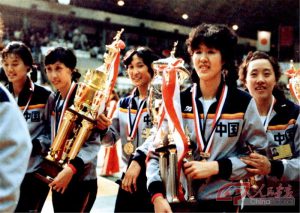 The 1.84m-tall volleyballer was the star outside hitter of China’s 1980s golden generation. They went on an incredible victorious quest, which started with the 1981 FIVB Volleyball World Cup gold and went through the 1982 FIVB Volleyball World Championship trophy and the Los Angeles 1984 Olympic triumph. All of these were historic achievements as it was the first time China had won any of these major international events.

Lang was named Most Valuable Player at both the 1982 World Championship and the Los Angeles Olympics. She also received the MVP honour at the 1985 World Cup, where China successfully defended their crown. During her first spell as a member of the national team, she also picked up gold at the 1982 Asian Games and silver at the 1983 Asian Championship. Later on, after playing professionally with Volley Modena for a season and winning Italy’s national cup, she made a short return to the Chinese national team and earned silver medals at the 1990 World Championship and the 1990 Goodwill Games. 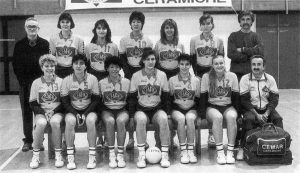 In her playing career, Lang Ping served as deputy captain, captain and assistant coach for the national team. She was named among China’s top 10 athletes of the year from 1980 to 1985.

Having earned her first university degree at the Beijing Normal University, during the second half of the 1980s Lang Ping went to the United States to get a master’s degree in sports management modernization at the University of New Mexico, where she later returned as an assistant coach of the women’s volleyball team, after the end of her playing career.

Lang’s coaching career received a major boost when she returned to China to take over the national team in 1995. During her first term on the job, she steered the team to a 1995 World Cup bronze, an Atlanta 1996 Olympic silver and a 1998 World Championship silver. In 1996, she was honoured as FIVB Coach of the Year.

Then she spent six seasons head coaching club teams in Italy, winning several domestic trophies and medals, in addition to the 2001 CEV Champions League gold at the helm of Modena. During that period, the Iron Hammer became a 2002 inductee to the International Volleyball Hall of Fame, the first Asian player to receive that honour.

Lang Ping took over as head coach of the US national team between 2005 and 2008. In that role, she claimed a 2005 FIVB Volleyball World Grand Champions Cup silver, a 2007 World Cup bronze and a Beijing 2008 Olympic silver, and made it to several continental podiums. 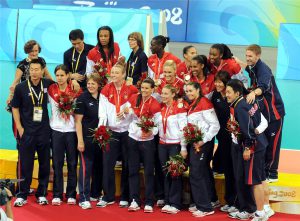 Between 2008 and 2014, Lang Ping coached club teams from Turkey and China winning medals in both countries and leading Guangdong Evergrande Guangzhou to a 2013 Asian Club Championship gold and a 2013 FIVB Volleyball Club World Championship bronze.

In 2013, Lang Ping began her second and most successful term at the helm of China. A 2013 FIVB Volleyball World Grand Prix silver was her first medal from that nine-year period. Under Lang’s mentorship, China went on to win gold at the 2018 Asian Games, the 2015 Asian Championship, three consecutive Asian Cup editions and the 2017 Grand Champions Cup, as well as two consecutive World Championship podiums with a 2014 silver and a 2018 bronze.

Lang Ping’s coaching career peaked in 2016 with the Rio Olympic gold. It was then when she became the first person in volleyball to collect Olympic titles as both a player and a coach.

China also made the podiums of the first two editions of the FIVB Volleyball Nations League before the coronavirus pandemic hit the world. It proved difficult for the team to quickly overcome all the pandemic-related consequences and at the postponed Olympic Games Tokyo 2020, which took place in 2021, Lang Ping’s squad crashed out in the pool stage and she took the blame, saying she was not able to find the solutions and lead the team through the troubles.

After their last match in Tokyo, Lang Ping and the Chinese players bid an emotional farewell that marked the end of her magnificent coaching career… for now.