AUSSIE STARS READY TO RETURN TO THE SAND IN BIRMINGHAM

A pair of world-class beach volleyball combinations will be out to add to their stellar representative record with gold for Australia at the Birmingham 2022 Commonwealth Games.

Taliqua Clancy and Mariafe Artacho del Solar, along with Chris McHugh, starred when beach volleyball was played for the first time in the Commonwealth Games at the Gold Coast in 2018.

Adelaide’s McHugh claimed a gold medal when partnering the now-retired Damien Schumann on the beaches of the Gold Coast four years ago. In Birmingham, he will team with Commonwealth Games debutant Paul Burnett, a West Australian now based in Adelaide, to defend Australia’s gold medal.

Brisbane-based Clancy and del Solar almost made it a golden double on home sands when edged out by Canada in the final at the Gold Coast. Clancy, a Wulli Wulli and Goreng Goreng woman from Kingaroy, and Peru-born del Solar, 28, have continued to perform with excellence for the green and gold since then.

Clancy, the first Indigenous player to represent Australia in beach volleyball, teamed with del Solar for the first time in 2017 and the partnership has flourished. The dynamic duo claimed a silver medal at the Tokyo 2020 Olympics with a series of outstanding performances that captured Australian hearts throughout the tournament. A gold medal at Birmingham would further enhance their glowing reputation as Australian athletes of global renown. 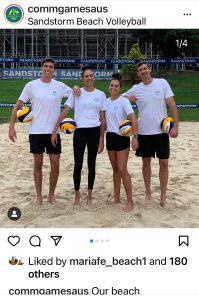 The pair are performing extremely well on the World Beach Pro Tour this year, and both athletes are excited by the opportunity the Birmingham Commonwealth Games presents.

“I’m grateful for another chance to wear the green and gold, and to represent my people,” Clancy said.

“Sport is an incredible place to showcase our beautiful culture, and the Commonwealth Games is no different.

“Mariafe and I really want to turn our silver from the Gold Coast in 2018 into gold.

“I can’t wait to get over there and show the world what we’re made of.” 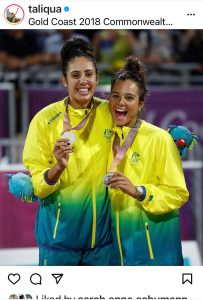 Chris McHugh and Paul Burnett put their chemistry to the test at the Asian Beach Volleyball Championships in Thailand last November and were delighted with how they combined in a competitive setting.

Burnett, 24, showed great potential as a teenager in volleyball and is a welcome addition as a partner for McHugh, full of confidence in his ability to deliver against elite rivals. McHugh, 32, has overcome significant adversity in his career, which includes a string of knee injuries. But he said the responsibility of representing Australia on the world stage has proven extremely motivating and can’t wait to be donning the green and gold with pride in Birmingham.

“I’m very excited to be selected on Team Australia for the Birmingham Commonwealth Games with Paul,” McHugh said.

“Every time we get to represent Australia and pull on the green in gold is so special.

“The gold medal on the Gold Coast was a phenomenal achievement for Damo (Schumann) and myself, and that will stay with us forever.

“But this is a new team, with Paul playing at his first Commonwealth Games, and we have our own goals that we are striving every day to achieve.

“We are going to Birmingham to win every game that we play, compete hard for every point and represent Australia with pride.” 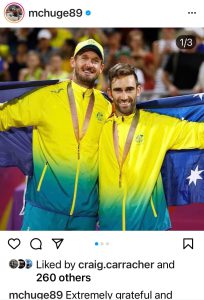 Australian Commonwealth Games Chef de Mission Petria Thomas OAM is confident both duos will represent the nation with distinction at the Birmingham Games.

“Congratulations to Taliqua, Mariafe, Chris and Paul on their selections to represent the green and gold at the Birmingham 2022 Commonwealth Games,” Thomas said.

“For Chris and Paul, they have quickly established themselves as an impressive pair on the world beach volleyball tour, and it’s great Chris returns to defend his gold medal from the Gold Coast and will be there to support Paul at his debut Games.

“While for Taliqua and Mariafe, the Gold Coast 2018 Commonwealth Games provided an excellent launch pad for their partnership, joining as a pair shortly before the Games and then went on to win silver, where they were greater together.

“They have since become Olympic silver medallists and now return to the Commonwealth Games as a formidable duo, where I know they will be bold, brave and brilliant in Birmingham.” 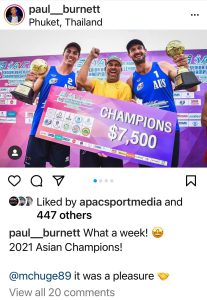 “On behalf of Volleyball Australia, I’d like to congratulate Mariafe, Taliqua, Chris and Paul on their selection to the Australian Team for the Birmingham 2022 Commonwealth Games,” Dee said.

“All four athletes are incredible ambassadors for our sport, and I know that they will do us proud on the world stage again this year.

“We had great success at the last Commonwealth Games on home soil in 2018, with Chris winning gold, and Mariafe and Taliqua a silver medal, and I know both teams are looking forward to having the opportunity to fight for personal best results in Birmingham this year.”

Very similar to indoor volleyball, this version of the sport is played on sand on a slightly smaller court between teams of only two players.

Matches are the best of three sets. The first two sets are played to 21 points. The third set, if required, is played to 15 points. The team winning a rally scores a point, regardless of who served.

Thousands of tonnes of golden sand will be shipped in to temporarily transform the former Smithfield wholesale markets site in the heart of Birmingham city as the host venue for the competition.