And making her mark on Korea’s system of play

Lee Soyoung has grown into her support role with Korea in a productive and confident way, improving the dynamics of the Korean team’s offensive scheme in the 2021 FIVB Volleyball Nations League.

Players like Lee Soyoung and Park Jeongah showed flashes of brilliance in the first two weeks of the VNL and shared scoring chores with their captain Kim Yeon-Koung.

And when Lee gets into a scoring rhythm, she makes a difference. Against Belgium at the end of Week 2, the Korean wing players persistently hit off the Belgian high block and forced a tiebreaker after being down 2-1. The final result could have been different for Korea if it had not been for a few missing links and errors down the final stretch. 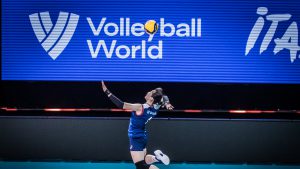 “Since our goal was to win, we went hard for it. Belgium have a high block and I tried to use that. I think it worked well,” Lee said.

“But the thing that was missing was passing and it was not good enough. The second touch could have been more precise so that the attacker could put the ball down.

“In the beginning, when I scored a couple of points, my confidence started to build. That’s when I started to ask our setter to give me more balls and get more involved in offence.”

“I think we will stick to the same plan since we will be facing a lot of tall blockers and we need to hit off the block to score points.”

Korea have only won one match so far in the competition, against Thailand, but will continue to look for a breakthrough when they play USA on Monday and Germany on Tuesday.

THAILAND GIVE IT ALL-OUT, BUT FIND DOMINICANS TOO STRONGZHANG CHANGNING FIRES OFF 37 AGAINST BELGIUM