The coaches joining the March 14-18 course consist of eight from Thailand, five from Maldives, two apiece from Australia, Malaysia, the Philippines and Singapore and one each from Japan and Hong Kong China. Only two female coaches, one from Thailand and another one from Hong Kong China, attended the advanced course which covers theory of training, improvement of skills and fitness, psychological aspects of coaching and advanced game tactics and exchange of ideas and experiences. 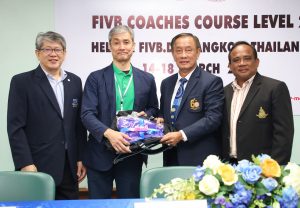 “On behalf of AVC, I would like to warmly welcome you all and thank you for your presence at this five-day course which is so important for us. In line with the FIVB’s development policies, the AVC has also determinedly set up a plan for sustainable development of Asian volleyball. We (AVC) have set up an E-Scoresheet software which will help allow you to automatically enter the information into the volleyball match scoresheet. The Thailand League tournament will be held on March 16 and 17 and therefore, I think you will have a chance to watch them at the compassion venue and study how the E-Scoresheet works. I wish you all great success in this course,” said Mr Shanrit in his speech.

Mr Anantadech also gave a welcome speech to all participants, citing that he and staff from the Ramkhamhaeng University Sports Office, where the course is being held, will try to provide the best conditions to the participants.