A remarkable tournament for Japan came to an end when the team received the gold medals during the awarding ceremony, while Mayu Ishikawa was honoured as the Most Valuable Player and one of two Best Outside Hitters along with teammate Haruna Soga.

“It is an honour to receive the MVP award; it comes with the support of all my teammates. Many people helped me and many hours of practice,” said Mayu Ishikawa.

Also from the gold medallists, Tsukasa Nakagawa was recognized with the Best Setter award for her ability to make fast decisions in distributing balls to Japan’s offence.

The Best Middle Blocker awards went to Yulia Brovkina from the bronze medal winners Russia and to Turkey’s Merve Atlier. Italy’s Ruth Terry Enweonwu was named the Best Opposite and China’s Feifan Ni received the award for Best Libero. 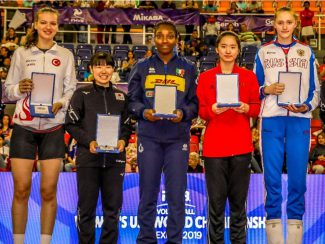