Riffa, Bahrain, August 27, 2022 – Iran, Korea, India and Thailand are set to fight for medals after advancing to the electrifying semifinals of the 21st Asian Men’s U20 Volleyball Championship at Isa Sports City Hall on Saturday, with Iran and Korea setting up a 2018 final clash of the Titans. 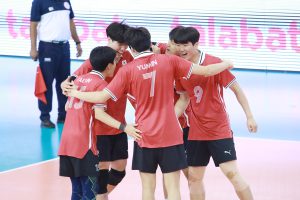 Iran and India earlier clinched their semifinal berths on Friday following their scintillating wins against their respective rivals, with the former, as reigning champions, demolishing Saudi Arabia 3-0 and the latter pulling off a stunning 3-1 win against hosts Bahrain.

In the Sunday’s semifinal encounters, defending and six-time champions Iran will test their mettle against former six-time winners Korea, while Thailand will be pitted against India. The two winning teams will battle it out for the eventual Asian title on Monday, but both finalists will secure their spots in the 2023 FIVB Volleyball Men’s U21 World Championship. Only two World Championship tickets are on offer for the top two teams in the 21st Asian meet here. Korea attacks in their Saturday’s match against Bangladesh

The Koreans are looking forward to a revenge match against Iran, the team they went down in straight sets in the final showdown at the previous edition in the 2018 also held here. Thailand celebrate their victory over China

Thailand are no stranger to the semifinals as at the previous edition four years ago, the Thai squad also made it through, but unfortunately went down 1-3 to the eventual winners Iran. They returned with a well-earned bronze medal after 3-1 win against Iraq in the third-place playoff.

India had already entered the semifinals for 8 times and also claimed two silver in1994 and 2002 to their name. They also have something to prove here in their 9th semifinals effort.

On Saturday, teams continued to play well, attempting to give their best to collect maximum points in front of  their cheering fans at the venue in tough encounters against strong opponents which for several times caused a series of thrilling rallies that had fans on their feet. Australia block a spike from Japan

Contesting their classification round for 7th-12th places, Iraq came back to beat the United Arab Emirates in tie-breaker 23-25, 25-22, 23-25, 25-17, 15-10. Iraq’s Taha Hasan and UAE’s Masood Darwish Mazar engaged in a fiery duel, with the former weighing in with a huge 29 points including 24 attacks and 5 ace serves and the latter scoring a team-high 28 points including 25 attacks. Pakistan and Qatar fight for the ball

Kuwait received a bye in the 17th-18th playoff to end their campaign in 17th position in this tournament. Meanwhile, the classification round for 1st-6th places turned out to be the day’s highlights. Thailand, bronze medallists at the previous episode four years ago, pulled off a stunning five-set win against former four-time champions China 25-19, 20-25, 25-22, 22-25, 15-12. On Sunday, the penultimate day of the on-going Bahrain-hosted championship, hosts Bahrain will take on Iraq and Saudi Arabia play Pakistan in the 7th-10th playoffs, while China will play their last match in this championship in the 5th-6th playoff encounter against Bangladesh.

Hong Kong, China and Australia will fight it out in the 15th-16th place playoff, with Chinese Taipei going up against Japan to vie for the 13th position and Qatar meeting the UAE in the 11th-12th playoff match.

India will face off with Thailand, with Korea setting up a mighty clash in  the do-or-die semifinals. The two winning teams in the semifinals will then strive for the Asian title in this 21st edition. 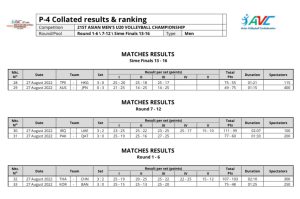