NEW FACES CALLED UP FOR CHINESE NATIONAL WOMEN’S VOLLEYBALL TEAM, AS ZHU TING AND ZHANG CHANGNING MISSING DUE TO INJURY

The Chinese national women’s volleyball team revealed its new recruits on Thursday with several fresh faces first time listed among the legendary side.

The new names include young players Wu Mengjie and Wang Yizhu who may be seen as the reinforcement for star spiker Li Yingying, as well as spiker Jin Ye, setter Wang Yunlu and libero Xu Jianan. 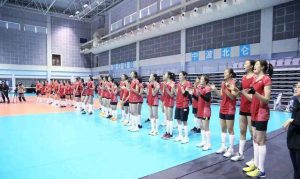 China’s international volleyball stars Zhu Ting and Zhang Changning were both not called up due to injury.

But the list also includes some veteran players such as 32-year-old setter Ding Xia.

Gong Xiangyu and Yuan Xinyue, who have attended both the Rio 2016 and Tokyo 2020 Olympics, represent “middle-age” players, the main force of the team.

After head coach Cai Bin took over the reins from the legendary coach Lang Ping, the Chinese national team assembled players from all over China for testing and selecting procedures.

“This recruitment aims for preparing the incoming FIVB Women’s World Championship and the 2022 Asian Games,” according to an announcement from China Volleyball Association (CVA).

“We want to assemble players from different age groups when forming the new national team so that the young players can get tested and grow up,” Cai said.

“Also, we’ve considered recruiting the middle-years who have potential and the veterans with experience in international competitions.

“But the door is still open for the newcomers,” he added.

Players called up to join the team