AVC GOES AHEAD WITH ADJUSTMENT OF 2022 AVC AGE GROUP CHAMPIONSHIPS, AS NAKHON PATHOM TO HOST 2 AVC EVENTS IN JUNE

Bangkok, Thailand, April 13, 2022 – The AVC Board of Administration has approved the adjustment of 2022 AVC Age Group Championships, as Nakhon Pathom, a city in central Thailand 56km from Bangkok, is set to host two AVC Championships this June.

In accordance with the FIVB Board of Administration Meeting on March 21-22, 2022 which announced to align the FIVB age group categories per gender to Under-19 and Under-21 for both genders, the adjustment of 2022 AVC Age Group Championships has also been considered important for representative women’s age group teams from AVC to compete in the FIVB Age Group Championships in 2023.

The information regarding the Age Group Volleyball Championships

As a result, the adjustment, which will take effect only in the women’s age group category, was given the green light from the AVC Board of Administration to follow the FIVB age group categories to avoid any difficulty this may cause. 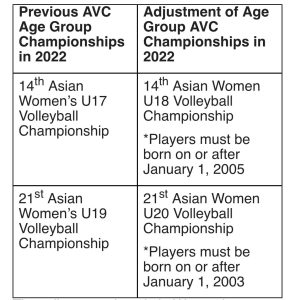 The adjustment is only in women’s age group categories

The letter providing information on relevant matters had already been circulated by AVC to its affiliated National Federations and concerned parties.

Earlier, the top-notch Asian Women’s U17 Volleyball Championship was due to be hosted by Uzbekistan on the same dates, but due to some unforeseen reasons, Nakhon Pathom has replaced Tashkent as the host city of the eight-day Championship, also adjusted to Asian Women’s U18 Championship as approved by the AVC Board of Administration.

The previous edition in 2018 was also hosted by Nakhon Pathom which saw title-holders Japan pull off a dramatic 3-1 win against China in the thrilling final showdown to capture their eighth title including seven in a row. Two years later, the Championship was originally scheduled to return to Nakhon Pathom, but was cancelled due to the outbreak of the coronavirus disease 2019 (COVID-19).

Following the adjustment of the women’s age group category, players who can take part in the Nakhon Pathom-hosted Asian Women’s U18 Volleyball Championship must be born on or after January 1, 2005.

Furthermore, Nakhon Pathom has also replaced Hong Kong, China as host of the “Princess Cup” 3rd AVC Women’s Challenge Cup at Nakhon Pathom Gymnasium between June 24 and 30, 2022. As the AVC Challenge Cup is held for lower-ranked sides, only teams not eligible for the AVC Cup can participate and strive for success in the Challenge Cup.