Barueri, Brazil, April 17, 2022 – Preparing for its next assignment, the Philippine women’s volleyball team has intensified its practice sessions on Saturday by giving importance to defense and tactics that could serve the country well in the coming 31st Southeast Asian Games in Hanoi, Vietnam.

The Philippine spikers will play another tuneup on Tuesday against a top-caliber Brazilian club that head coach Jorge Edson Souza de Brito has yet to name, the second of at least five high-level matches on tap to whip them up in superior shape in time for the Games less than a month from now.

“We always add something new each time we go into practice. I can see the improvement day by day, so when we play the next match, we’ll become better,’’ said de Brito after concluding a pair of workouts on Day 3 of the team’s two-week training camp at Sportville here.

Middle blockers Jaja Santiago and Dell Palomata were bunched with open spikers Alyssa Valdez and Ces Molina, opposite spiker Mylene Paat, setter Iris Tolenada and libero Dawn Macandili, who all worked on the defensive pattern instilled by the coaching staff.

“We did tactics in the morning and put all the guys together in the afternoon, but we used only five players on each side,’’ said de Brito, who was competently assisted by coaches Odjie Mamon, Grace Antigua, Raffy Mosuela, Tina Salak and therapist Grace Gomez.

“With five (players), you will do more using less guys. They have to move more, react more and cover more space than usual,’’ added the Brazilian tactician who captured a gold medal with Brazil’s men’s volleyball team in the 1992 Barcelona Olympics.

The Philippine National Volleyball Federation under its president Ramon Suzara has formed the national women’s squad seeking for a podium finish in the Vietnam SEA Games on May 12-23.

The last time the Philippine spikers captured at least a bronze medal in the Games was back in the 2005 edition when Manila played host.

Prior to the bronze finish in 2005, Team Philippines also claimed the same medal color in 2003 Hanoi long after the national lady spikers seized the gold in the 1993 Singapore edition. 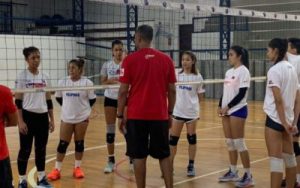 The Philippine spikers will travel for more than an hour to the opponents’ home court also here in Sao Paolo state, their second meeting with a Brazilian club since setting up camp at Sportville, a center of excellence for volleyball, five days ago.

“I want to use all the players again (during the tuneup) and repeat some formations,”said Philippine women’s head coach Jorge Edson Souza de Brito on Day 4 of their workout series in this country famed for samba and the annual Carnaval.

Training twice a day except on Sunday, the coaching staff has seen vast improvements during practice that the team could apply against Sesi Sorocaba.

“You have to give opportunity to everyone. They all have to be prepared to solve any problem that they will encounter on the floor,” added de Brito.

With little rest following a 40-hour flight from Manila, the national spikers immediately plunged into training the day after and played their first tuneup against Sao Caetano that evening.

“When you go inside (the court) whether during practice or in a game, it’s very important that you don’t lose focus out there,” said de Brito, who has a competent team of assistants in Odjie Mamon, Grace Antigua, Raffy Mosuela, Tina Salak and therapist Grace Gomez.

They have to whip up the team, which also features Kat Tolentino, setters Kyle Negrito and Iris Tolenada, liberos Dawn Macandili and Kath Arado and middle blockers Ria Meneses and Dell Palomata, into top form in time for the coming Southeast Asian Games in Hanoi, Vietnam.