The Philippine women’s volleyball team left for Brazil Tuesday for a two-week training as part of build-up for the Hanoi Southeast Asian Games. 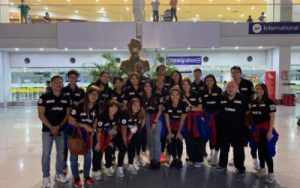 “We wish you all the best of luck in Brazil,” said Philippine National Volleyball Federation secretary-general Don Caringal, who represented on behalf of PNVF President Ramon Suzara during Monday’s send-off at Dad’s World Buffet in SM Megamall, Mandaluyong.

Open spikers Alyssa Valdez, Jema Galanza and Ces Molina were present together with opposite spikers Kat Tolentino and Mylene Paat.

Middle blocker Jaja Santiago, who is currently in Japan, will go straight to Brazil.

The Brazil training camp will be held at Barueri near Sao Paolo where the team will be staying until April 27.

“We know they will all get much better with the training they will get at the Brazil camp. And hopefully we will become more competitive in international competitions such as the Southeast Asian Games,” said PNVF Executive Board Member Ricky Palou, who is also the Deputy Secretary General for International Affairs. 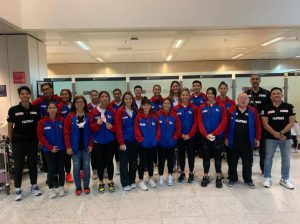 Barueri, Brazil – The Philippine women’s volleyball team arrived here Wednesday night (Thursday in Manila) after almost 40 hours of travel to set up a training camp in preparation for the country’s medal drive in the 31st Southeast Asian Games.

SEA Games veterans Alyssa Valdez, Aby Maraño and Jaja Santiago headline the 14-athlete squad that will go through a series of tuneup matches against some of the finest Brazilian club teams in a span of two weeks.

They are all billeted at Sportville, a center of sports excellence in this municipality located an hour away from Sao Paolo City, under the tutelage of coaches Odjie Mamon, Grace Antigua, Brazilian coach Jorge Edson Souza de Brito.

“We will begin our training after breakfast tomorrow and test the team in a tuneup game at night,” said de Brito, who played for Brazil’s gold-winning men’s national team in the 1992 Summer Olympics in Barcelona.

The women’s squad faces Superliga A club team São Caetano for its initial salvo before scheduling four or five more tuneup games that could serve the country well in the coming SEA Games in Hanoi, Vietnam on May 12-23.

“The goal is to win a medal in Vietnam. Although the team was formed only recently, the training camp that will run for two weeks in Brazil will be an integral part of our preparation,” said Suzara.

PNVF secretary general Don Caringal and team manager Fe Moran led the team’s orientation and sendoff in Manila after the federation finally put together the necessary pieces for the SEA Games following the conclusion of the Premiere Volleyball League championship last week.

“We wish them the best of luck in Brazil. We’re confident that the training camp will bring out the best from these players as a team,” said Caringal.

This is the first time the squad will practice together since the entries for the team in the SEA Games were finalized last week.

The last time Philippines women’s volleyball team captured the gold medal in the SEA Games was in 1993 and had a couple of bronze medals in 2003 Hanoi and 2005 Manila. 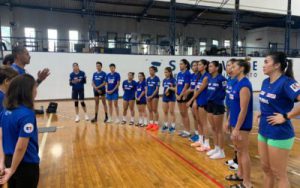 Sao Caetano Do Sul, Brazil – The Philippine women’s volleyball team pulled off a commendable effort against one of the toughest Brazilian club teams on Thursday (Friday in Manila) despite coming off a tiring 40-hour trip the night before.

Sao Caetano, the reigning champions in the Superliga B here, dropped only one of the five sets in a tuneup with the national squad in their home court at the Prefeitura Municipal de Sao Caetano do Sul here.

Mylene Paat scored nine points, including a pivotal hit that put the Filipinos at game point before open spiker Ces Molina denied the final Brazilian strike at the net to close out the fourth set.

Molina had eight points (seven attacks and one block) as well as Jema Galanza, Kat Tolentino and Alyssa Valdez while Jaja Santiago added six attacks and a block but the team, the lineup of which was only finalized last week, committed 41 errors collectively.

“We did what we were supposed to do. Despite arriving just last night after the long trip, we did a good job. We will produce better results as they practice more together as a team,’’ said de Brito.

The women’s team immediately plunged into action against Sao Caetano just a few hours removed from its first practice at Sportville in Barueri town where the Southeast Asian Games-bound squad has set up a training camp for two weeks.

Good thing there are no injuries on our first day. I’m very proud of them because they believe in themselves,’’ said de Brito.

Setter Kyle Negrito, Dell Palomata and Majoy Baron also made a good account of themselves as well as team captain Aby Maraño, Iris Tolenada and libero Kath Arado. Middle blocker Ria Meneses didn’t suit up for the match and libero Dawn Macandili was fielded in sparingly.

The Philippine National Volleyball Federation, led by its president Ramon “Tats’’ Suzara and secretary general Don Caringal, organized the Brazilian camp in preparation for the medal bid of the squad in the coming Southeast Asian Games in Hanoi, Vietnam.

The trip of the women’s volleyball team was backed by the Philippine Sports Commission, Philippine Olympic Committee, Rebisco, PLDT and the City of Taguig.

According to de Brito, the team will undergo two practice sessions in the morning and late in the afternoon beginning on Friday until Monday before facing a topnotch club on Tuesday for another tuneup. 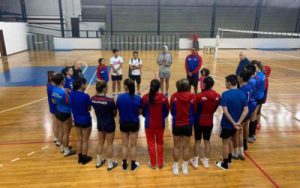 Barueri, Brazil – The Philippine women’s volleyball team immediately went back to work on Friday, just a night’s sleep removed from its tuneup against Brazilian Superliga A club team Sao Caetano.

On the second day of training at Sportville here, the PH spikers went through two training sessions designed to address a couple of areas that could eventually develop them to thrive on the floor as one close-knit unit.

“We have to improve in all areas and develop ways to make them play efficiently together,’’ said head coach Jorge Edson Souza de Brito after witnessing the team compete in a high-level matchup for the first time with a cohesive Sao Caetano side despite practicing only once on the same day.

The scores (25-20, 25-17, 25-20, 27-29, 15-9) in the five-setter against the hosts didn’t go to the country’s favor, but it showed an initial assessment of the direction that this team has to go through to reach the pinnacle of success in the coming Southeast Asian Games in Hanoi, Vietnam.

The coaching staff divided the team into two during the morning training session and primary delved on the technical skills of open spikers Alyssa Valdez, Jema Galanza and Ces Molina, opposite spikers Kat Tolentino, Mylene Paat and liberos Kath Arado and Dawn Macandili. Middle blockers Jaja Santiago, Aby Maraño, Ria Meneses, Majoy Baron and Dell Palomata, on the other side, went to the weights room and got a refresher on the roles that they have perform together with setters Kyle Negrito and Iris Tolenada.

“We watched the video (of the game against Sao Caetano) and we reminded them of some important things. Although the skills and technical know-how are there, we will be looking to satisfy our vision for the national team,’’ said coach Odjie Mamon.

“But we just had our third practice in two days. I think by the time we play our second tuneup match, we will be able to do what the coaching staff wants to see,’’ added Mamon, who helped de Brito in practice together with coaches Grace Antigua, Raffy Mosuela, Tina Salak and therapist Grace Gomez.

The Philippine National Volleyball Federation, led by its president Ramon Suzara organized the Brazilian camp in preparation for the medal bid of the squad in the coming 31st SEA Games in Hanoi, Vietnam.

PNVF executive board member and national team chairperson Tony Boy Liao accompanied the team in the trip supported by the Philippine Sports Commission, Philippine Olympic Committee, Rebisco, PLDT and the City of Taguig.

Philippine Ambassador to Brazil Mario F. Chan came all the way from Brasilia, Brazil’s seat of power, to watch the tuneup of the national spikers along with Consul General Chad Jacinto and Philippine embassy staff Rowena Neri, Arnel Bautista and Erika Limlengco.

Team Philippines last won a medal in SEAG women’s volleyball with a bronze in 2005 Manila, 12 years after capturing the gold in the 1993 Singapore edition.

De Brito said the PH women spikers would play five to six tuneup matches during the two-week training camp with the next assignment against another top-caliber Brazilian club scheduled Tuesday.