Tokyo first hosted the Olympic Games in 1964 when volleyball made its debut on the Olympic programme. The winners of the first edition of the Olympic women’s volleyball competition were hosts Japan, finishing ahead of the Soviet Union and Poland.

Fourteen editions later, the Olympics return to the Japanese capital with a 12-team field that makes the competition one of the toughest ever in its history. 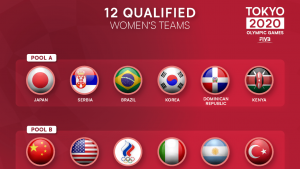 The 12 women’s teams will be divided into two pools of six teams. Pool A includes hosts Japan, Serbia, Brazil, South Korea, Dominican Republic and Kenya, while Pool B is composed of reigning Olympic champions China, the United States, ROC, Italy, Argentina and Turkey.

Each team will play against the other five teams in the same pool in a single round robin system. Then top four teams in each pool will advance to the next phase playing in a knockout system in the quarterfinal, semifinal and final rounds. 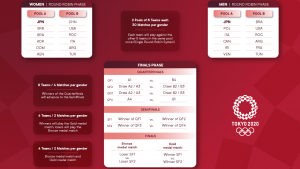 Olympic champions China will face the team on the rise, Turkey at 16.25, then the host team will play African side Kenya at 19.40. The last match on the opening day is scheduled to take place at 21.45 between two-time Olympic champions Brazil and Korea.

A power-packed Tokyo 2020 edition features an abundance of the biggest and toughest hitters in the sport today.

ROC are bannered by three-time Olympian Nataliya Goncharova and youngster Arina Fedorovtseva, while Italy are led by their point-maker Paola Egonu.

The Italians are yet to win an Olympic medal, while the Russians are looking for an upgrade to their two silver medals from Sydney 2000 and Athens 2004.

The USA team features returnees from their Rio 2016 squad, including captain Jordan Larson, Kimberly Hill, Foluke Akinradewo and Kelsey Robinson. The rest of the squad are Olympic debutants but made their contribution to USA’s success in the last five years, including the three-peat title wins at the FIVB Volleyball Nations League.

Argentina will count on the strong performances of Yamila Nizetich and their best attacker Elina Rodriguez to challenge the VNL champions.

Since their silver medal finish in Rio de Janeiro, Serbia have kept their momentum going and topped the World Championship podium in Japan. Seven players from that squad are in Tokyo headed by Maja Ognjenovic and Tijana Boskovic.

The Dominican Republic also have a solid line-up led by Prisilla Rivera, Brayelin Martinez and Bethania De la Cruz. After collecting nine victories at the latest edition of the VNL, the Dominicans are out to give a good fight.

China went on to claim gold in Rio 2016 and are certainly in the hunt for their fourth Olympic gold medal. Coach Lang Ping had to rely on Zhu Ting’s heroics in 2016, but this time around, Zhu will have support from young star Li Yingying and a strong arsenal of hitters. And with Ding Xia’s brilliant playmaking skills, the Asian powerhouse squad are a force to reckon with. 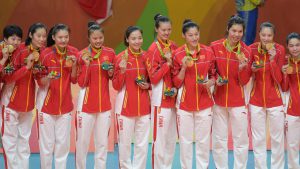 The Turkish side has created some great surprises in the last couple of years, making it to the VNL Finals three consecutive times and winning medals on two occasions. Coach Giovanni Guidetti’s squad has plenty of talent to showcase. They have great leaders in middle blocker Eda Erdem Dundar and Zehra Gunes, and their hitters Hande Baladin, Meryem Boz and vibrant youngster Ebrar Karakurt will aim to score as often as possible in their second Olympic campaign.

Japan are hoping to replicate their 1964 feat at the Olympics and win a medal in their home Games this year.

Erika Araki, who was part of the team that won bronze at London 2012, is back as captain and leads a young and talented squad. At the 2021 VNL, Japan showcased powerful performances by Sarina Koga who teamed-up with young players Mayu Ishikawa and Ai Kurogo to execute the offence ran by crafty setter Aki Momii.

Kenya will make their third Olympic appearance after Sydney 2000 and Athens 2004. The Kenyans have trained hard for the Olympic Games with experienced Brazilian coach Luizomar De Moura and things are looking bright for the African team.

Brazil meanwhile are seeking to achieve another Olympic podium finish. After claiming back-to-back bronze medals in 1996 and 2000, they topped the podium at Beijing 2008 and London 2012.

Brazil are bringing in 12 of their players from the 2021 VNL team that finished second, including VNL Dream Team members Tandara Caixeta, Gabi Guimaraes and Carol Gattaz.

Korea are headed by superstar Kim Yeon Koung, who is playing in her third and likely final Olympics. Kim and other veterans Kim Heejin and Kim Su Ji will work with their Italian mentor Stefano Lavarini and a cast of young talents to follow up on their Montreal 1976 bronze medal.