Roi Et, one of the northeastern provinces of Thailand with a driving distance of 516 kilometres from capital city Bangkok, was no stranger to hosting beach volleyball events as it had already hosted the Asian U21 Beach Volleyball Championships in 2017.

“Roi Et has been entrusted to organise the Championships for the second time. So, we tried our best to make our preparations much better than the edition two years ago when we hosted the event for the first time,” Roi Et Governor Mr Wanchai Kongkasem said in his speech during the press conference on Monday.

“We, Roi Et people, set our sights on the general requirements to meet highest international standards. All competition courts to be used in the 2019 Championships will install lighting, which has been adapted to lightning efficiency as necessarily required by the FIVB. More than 200 court officials and well-trained staff will also be provided to make sure all participating teams will enjoy competition and friendly experience in our province,” he added. 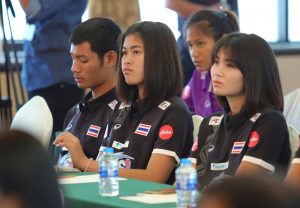 “A total of 54 teams including 30 men’s have confirmed their participation in the Asian meet and I hope that Thai players can prove their talents to make the cut for the FIVB U21 Beach Volleyball Championships, which will also be held in Thailand, in Udon Thani province between June 18 and 23,” Somporn said.

Mr Prajaya confirmed that during the match days, SMM TV and Thairath TV (Channel 32) will televise the tournament live from 3pm to 5pm.

According to the FIVB press release, the 17th edition of the double-gender age group event in Udon Thani is the only age-group World Championships on the 2018-2019 FIVB international schedule and it will be an opportunity for the best players in their class to pick up valuable experience on the way to a career in senior competition.

Thirty-two teams per gender (and 24 teams per gender in the qualification round) will compete in the main draw for the title of U21 world champions and earn wild card access to a World Tour event.

The qualification system will ensure the universality of the tournament as teams from all five volleyball confederations will also take part.

Historically, many of the young stars of today have built up their experience at the age-group FIVB World Championships before advancing up the ladder in international competition to the FIVB Beach Volleyball World Tour.