QATAR GETS INAUGURAL MEN’S BEACH VOLLEYBALL LEAGUE OFF THE GROUND

Bangkok, Thailand, December 28, 2020 – Qatar and Al-Arabi got their journey off to great start in the inaugural Qatar Senior Men’s Beach Volleyball League, which kicked off at Al Gharafa beach courts on Sunday evening, volleyball.qa reported.

Qatar team pulled off a convincing 2-0 win against Al-Gharafa, while the tough match between Al-Arabi and Al-Sadd saw the former struggle to beat the latter 2-1.

The tournament, which will be held until February 11, 2021, has attracted 10 club teams to vie for the top honour. They are Police, Al-Arabi, Al-Rayyan, Al-Wakrah, Al-Ahli, Al-Khor, Al-Sadd, Qatar, Al-Gharafa and Al-Shamal.

On Tuesday, Al-Ahli are due to take on Police, with Al-Rayyan challenging Al-Shamal. Both matches will take place simultaneously at 5pm local time. 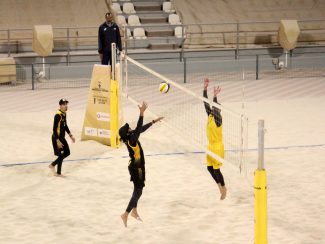