Qatar’s Cherif Samba and Ahmed Tijan clinched silver medal after going down to Norwegians Anders Mol and Christian Sorum 0-2 in the final of the FIVB Beach Volleyball World Tour at the Cancun Hub in Mexico on Tuesday.

With the exceptional win in the first 4-star tournament, the Norwegians entered the FIVB Beach Volleyball World Tour’s men’s top 10 in team victories with their 11th title together.

The Norwegians, currently ranked first in the world, completed a perfect first week on Mexican sand with a 2-0 (21-19, 22-20) victory against the Qataris that took them to the highest step on the podium at Playa Delfines.

Cherif, a 25-year-old Rio 2016 Olympian, and the 25-year-old Ahmed, who arrived in Cancun fresh from a fourth-place finish at last month’s 4-star Katara Cup, have won five matches in a row after losing their tournament-opener against Russians Konstantin Semenov and Ilya Leshukov.

The Qataris, who eliminated reigning world champions Oleg Stoyanovskiy and Viacheslav Krasilnikov of Russia in the Round of 16, are currently ranked 13th in the world and one of the few teams on the planet to hold a positive record against the Norwegians, having won two of their three matches with the Europeans, all of them in 2018.

“They are so strong and have beaten so many great teams in this tournament,” Mol said about their Qataris. “It’s always a battle against them, they have so much energy and play with a lot of passion. It’s always fun to play against them because they bring so much athleticism and skill to the court. They really push us to play at our best and today we battled it out. I’m so proud that we managed to win this amazing trophy in our first tournament in almost two years.”

The 11 World Tour gold medals the Beach Volley Vikings collected between 2018 and 2021 have put them in tenth position in terms of the number of international victories for a team. The top 10 is headed by Brazilian Olympic champions Ricardo Santos and Emanuel Rego, who triumphed in 34 events, and has Americans Phil Dalhausser and Todd Roger at second with 23.

A top three spot is in close reach for Mol and Sorum, who need just five more victories to overtake Jose Loiola/Emanuel Rego and Jose Marco Melo/Emanuel Rego, who won 15 tournaments each.

Meanwhile, Ondrej Perusic and David Schweiner collected their second medal in as many events as the Czechs finished third in Cancun. The Europeans, who are fresh from winning their first gold medal together last month in Doha, ended their campaign in the first tournament in Mexico with a 2-0 (21-18, 21-12) bronze medal match victory over Austrian qualifiers Martin Ermacora and Moritz Pristauz. 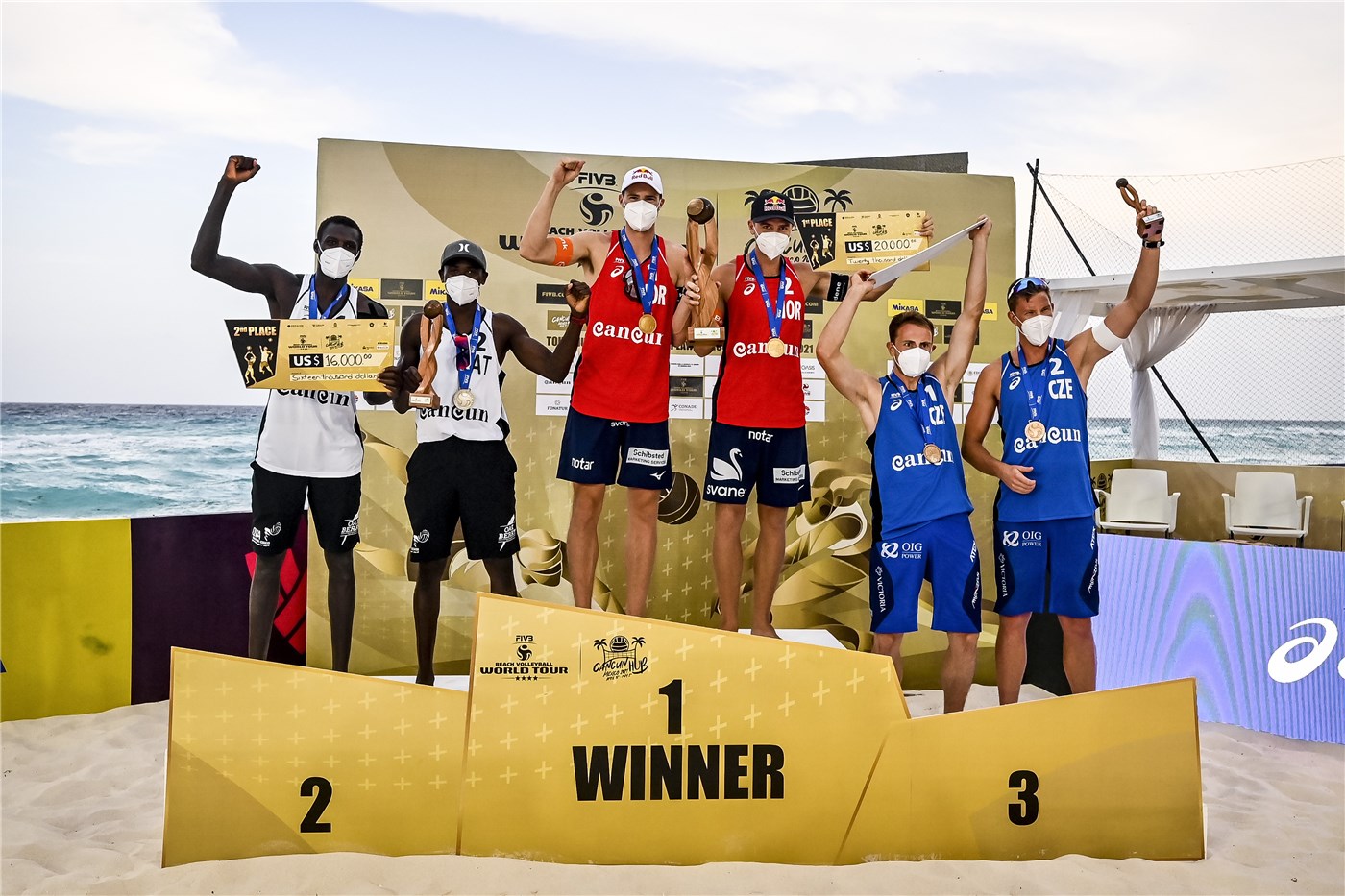