Tokyo, Japan, July 26, 2019 – Nils Ehlers and Lars Fluggen are the last qualifying team standing in the men’s Tokyo Open as the German pair advanced to the quarterfinals of the $300,000 FIVB World Tour with an elimination win over a team from Canada here Friday evening.

Seeded 15th in the main draw after winning a qualifying match Wednesday over a duo from Thailand, Ehlers and Fluggen posted their second win Friday in the first round of elimination in the 16-team bracket by ousting 16th-seeded Sam Pedlow/Sam Schachter of Canada 2-1 (17-21, 23-21, 18-16) in 61 minutes.

With four wins in five matches this week, Ehlers and Fluggen are now guaranteed their best FIVB placement in an elite World Tour event as the Tokyo Open is a four-star tournament. The Germans placed fifth at a three-star event earlier this season in Malaysia.

“We are elated with our play this week,” said the 29-year-old Fluggen, who competed in the Rio 2016 Olympic Games with Markus Bockermann.  “Right now, I cannot tell you how we beat the Canadians. We just played our game and Nils made a big block at the end of the match. We exhausted and just trying to get ready for tomorrow.”

In the quarterfinals, Ehlers and Fluggen will play third-seeded Andre Loyola/George Wanderley of Brazil, who eliminated compatriots and 18th-seeded qualifiers Saymon Barbosa/Gustavo “Guto” Carvalhaes 2-0 (21-16, 21-19) in a 38-minute Round of 16 match.

It will be the fourth FIVB meeting between the Germans and Brazilians as Andre and George have won the first three matches with Ehlers and Fluggen, including a 2-0 (21-19, 21-19) pool play win here Thursday.

Ehlers and Fluggen were one of three qualifying teams to advance to the Round of 16 Friday event as the Germans and Saymon/Guto were joined in the elimination bracket by Quincy Aye/Arnaud Gauthier-Rat, the 20th-seeded Frenchmen were ousted from the Tokyo Open after losing 2-0 (21-12, 21-11) in 29 minutes to 12th-seeded Phil Dalhausser and Nick Lucena of the United States.

The men’s semifinals will also be played Saturday at Shiokaze Park along with three rounds of women’s elimination bracket competition. The Tokyo Open concludes Sunday with the medal matches for both genders as the winning teams collect the $20,000 first-place prize along with 800 qualifying points for the Tokyo 2020 Olympic Games. 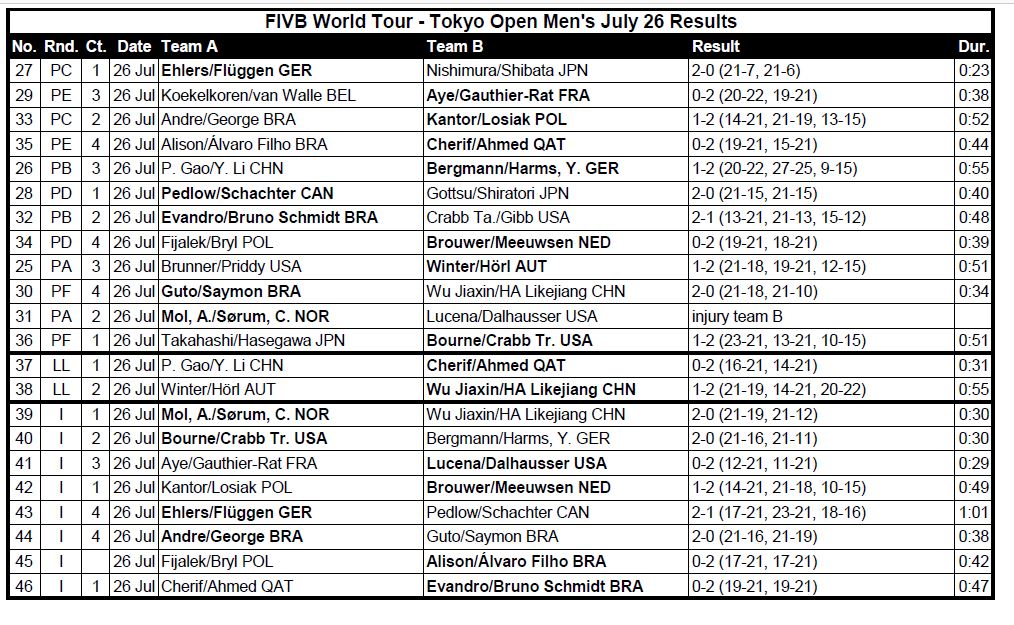 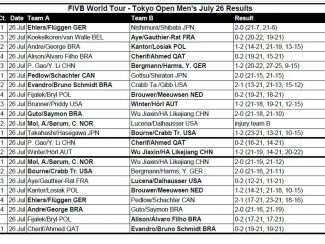 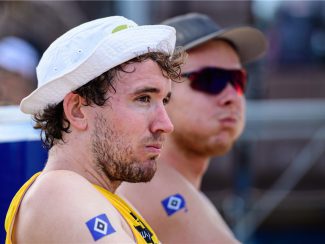