Bangkok, Thailand, November 26, 2020 – The drawing of lots ceremony for the 4th National Men’s Volleyball Championship from December 20, 2020 to January 30, 2021 was held on Thursday evening at the QVA Hall Meeting Room, volleyball.qa reported.

Mr. Saeed Salem Al-Jamaani, Assistant Secretary of the Qatar Volleyball Association, presided over the ceremony, with representatives and coaches of the clubs participating in the tournament attending.

According to the draw results, Al-Rayyan, Al-Khor, Police, Al-Arabi and Qatar clubs are in Group A, while Group B comprises Al-Wakrah, Al-Gharafa, Al-Ahli, Al-Sadd and Al-Shamal.

The tournament will be held in the two-group system, a league of one round, and the teams were distributed between the two groups by the absolute lottery. The first of each group will qualify for the final match to determine the eventual winning team of the tournament.

The championship will be contested in two periods, with the first session starting on December 11 and ending on December 16 and the second period being held from January 23 to 30, 2021.

Mr. Mohammed Salem Al-Kuwari, member of the QVA Board of Directors and Vice Chairman of the Beach Soccer Committee, presided over the ceremony.

A total of 10 clubs, namely Al Rayyan, Al Khor, Police, Al Arabi, Qatar, Al Wakra, Al Gharrafa, Al Ahli, Al Sadd and Al Shamal will take part in the tournament, of which the start has been postponed until after December 20.
The QVA confirmed that the Beach League will be held in a one-round club league system, where each club will compulsorily participate with two teams, providing Team A to consist of two players, citizens and a resident citizens, and both of them are under 21 years old and devoted to beach volleyball.

The second team or Team B may consist of citizen or resident players who are registered for the beach or inside the halls. 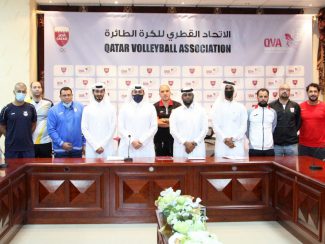