All the international referees must stay in the secure bubble while requiring to take COVID-19 test every three days like the team delegations and Control Committee Members to avoid close contact with other participants.

Ten accompanying referees including two from Category B and C had been nominated by AVC to officiate at this topflight Championship under the guidance of Referee Delegate Mr Songsak Chareonpong from Thailand and Referee Subcommittee Member Mr Takashi Shimoyama from Japan.

Since referees from the Philippines and Uzbekistan could not take part in the Championship for unidentified reasons, two candidate referees from Thailand had been called up to fill the two vacancies at the final moment.

Though having completed the theoretical phase of Refereeing Clinic, the referees could not undergo the practical phase since the Asian Women’s Club Championship was being held at the competition venue and Songsak, therefore, decided to invite all referees to sit courtside behind the first referee on duty to observe the matches on the final day in the 2021 Asian Women’s Club Championship.

During the Referee Clinic, all referees also stood chances to work closely with the Video Challenge. All the participating teams took the benefit of the new-technology Video Challenge System as it is used at the Terminal 21 Hall to assist the referees in the decision making process in order to make the game absolutely fair to the athletes’ actions.

According to the Video Challenge team, Challenges are allowed for one of the following situations:

a) Ball in/out – for side and end lines

b) Block Touch – contact with the ball by the player (i.e. the blocker)

e) Foot Fault – a) contact of the server with the playing court (end line included) or the lateral free zone outside the service zone, b) faulty contact of a player with the 3-meter attack line, c) the complete crossing of the center line by the player’s foot or feet.

“Thailand Volleyball Association has provided necessary facilities to all participating teams and officials to make everything safe for the tournament and make it a smooth run. We officiated two candidate referees from Thailand to enter the bubble as I was informed earlier that referees from Uzbekistan and Philippines could not join the Championship,” Songsak explained. 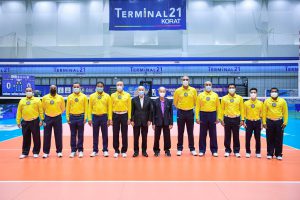