The Australian National team won all of their five matches between Saturday and Sunday in windy and difficult conditions at Glenelg Beach. They went into the final without conceding a single set during their campaign, just as they had done two weeks before in the opening ABVT leg in Cobram, VIC.

Things changed in the gold medal match, when Thomas Hodges and Paul Burnett managed to take the second set and force the number one seed of the tournament to a third and deciding set. Despite facing fierce opposition, Schumann/McHugh maintained composure and eventually outplayed Hodges/Burnett to a 2-1 victory (21-18, 18-21, 15-11). 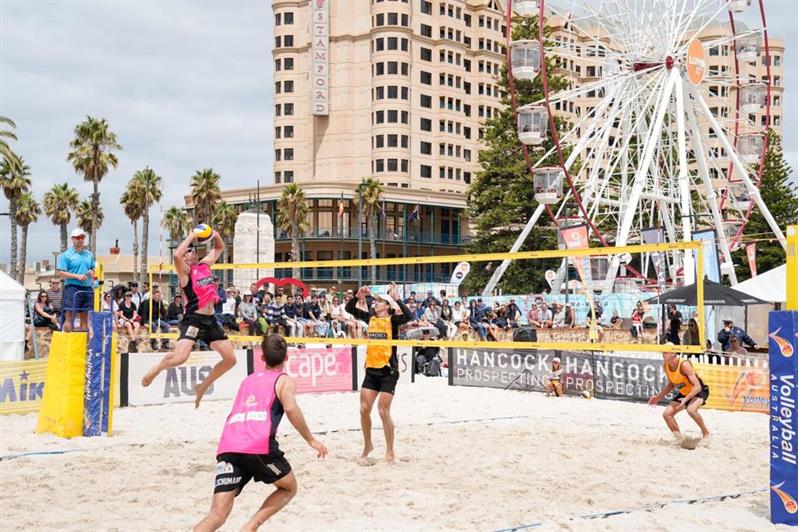 “It was tough, those guys [Hodges/Burnett] have been playing really well. We’ve played them at our last three events, in either the semifinals or, this time, in the final, and every time we play them it’s a massive battle. So we’re really happy to get the job done when we were so close all the time,” said Schumann.

Despite the challenges of the current situation, the experienced South Australian team are keeping focused and motivated as they mount their Olympic campaign for Tokyo.

“We’re just taking it week by week at the moment, when opportunities arise you’ve got to be there to take them. For us it’s just about trying to improve. When we get the chance to compete, like this weekend, we put our best chance forward and go for it. We’re looking forward to Manly and the Australian Championships in two weeks time. The National Championships are always one of the highlights of the year for us,” said McHugh.

The match was tightly contested until the second change of ends, when Schubert and Guehrer imposed a 6-1 run to break away and take home the first set. Zieba and Kapa adjusted their game in the second set, but still couldn’t match their opponents. For Schubert and Guehrer it’s the second medal of the tour after winning silver in Cobram. The Adelaide-based pair were glad to finish the tournament on a high note this time, even with a bronze.

“You’re always going to be happy, walking away with a bronze medal. It’s funny how two weekends ago, when we were in Cobram, I said to Max – it doesn’t feel as good, sometimes winning a bronze feels better. So we’re definitely happy this weekend,” Schubert said.

“We were definitely not happy after the semifinal. But then to come back, turn it around and finish up with a bronze medal and on the podium, you’ve got to be happy with that bounce back,” Guehrer said.

The third leg of the Australian Beach Volleyball Tour will be held in Manly, on February 19-21. The tournament will also be valid as the Australian National Championships, for both men and women. Guehrer said that he and his partner are looking forward to another opportunity to chase a gold medal on the tour.

“We want to take that fire that we’ve brought up from not performing how we wanted this morning [in the semifinal]. We’ll be fighting tooth and nail to get back into the gold medal game and will do our best to finish on that top step,” Guehrer said.

Tune into SBS on Sunday, February 21 at 2pm and 3pm AEDT for the gold medal matches live from Manly for the Australian Championships and third leg of the ABVT.