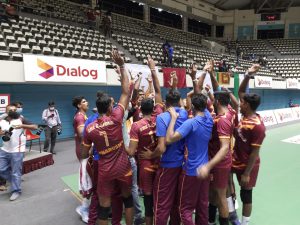 The one-day competition served as the qualification match for Central Asian Zonal Volleyball Association to determine the team eligible for the 21st Asian Senior Men’s Volleyball Championship in Chiba and Funabashi, Japan from September 12 to 19, 2021, with only top two teams making the cut for the 2022 FIVB Volleyball Men’s World Championship in Russia. 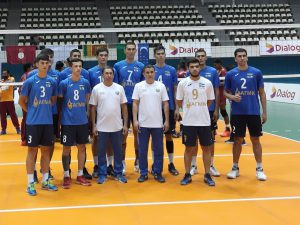 Regarding the competition report by A.S, Nalaka, Secretary General of Sri Lanka Volleyball Federation, to ensure the health and safety of all participants, the Uzbekistan volleyball team underwent the COVID-19 PCR Test upon their arrival in hotel in Colombo on July 11.

Invited to officiate at the July 14 Match were two International Referees from Maldives, Mr Ahmed Saleem and Mr Hassan Shimad, who arrived on July 13 and also underwent the COVID-19 PCR Test upon entering Suriya Resort allocated for accommodation. Mr Susil Ranasinghe was designated as Technical Delegate and Mr Wimal Amarasinghe the Referee Delegate. 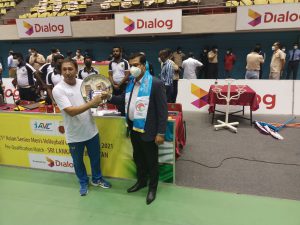 According to the report, the preliminary inquiry was held on July 12 at Sugathadasa Sports Hotel
which saw Technical Director Mr K.R.D.C Rathnamudhali, SLVF Treasurer Mr G.D.T.S Perera, members of the Organizing Committee and manager/head coach of both Sri Lanka and Uzbekistan teams participate in this meeting. 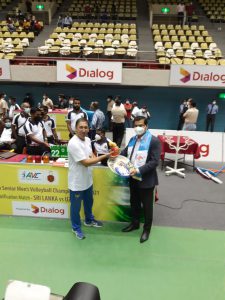 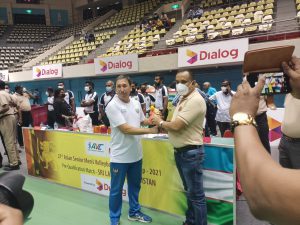 Hon. Namal Rajapaksa, Minister of Youth and Sports and State Minister of Digital Technology and Enterprise Development, presided over the opening of the Match on July 14, which was televised live to Sri Lankan volleyball fans. Also in attendance were SLVF President Hon. Kanchana Jayarathna, SLVF Secretary General A.S Nalaka, Chairman of the Sri Lanka Rupavahini Corperation, and other distinguished guests. 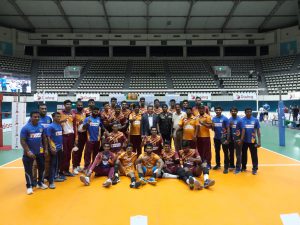 Against world No.136 Uzbekistan, Sri Lanka, strengthened by powerful hitter Janitha Surath, struggled to win the hard-fought first set 25-23. The host team, No.55 in the FIVB world ranking, maintained their poise to take the one-sided second set 25-13 and went on their attacks to capture the third set 25-22 and match. 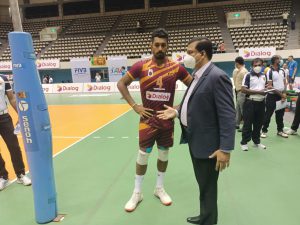 With a confident straight-set win, Sri Lanka will represent the CAZVA to test their mettle in the 21st Asian Senior Men’s Championship in September. It will be the Sri Lanka’s 13th appearance in the top-flight competition. Their best result dated back to the 2011 edition in Iran, where the Sri Lankans finished 8th place. At the previous episode in Tehran, Iran two years ago, Sri Lanka came in 14th position. 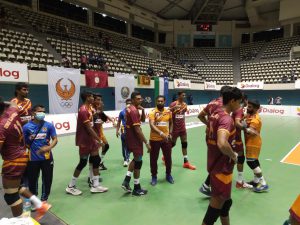 Uzbekistan had competed in the Asian Championship for four times and they finished a distant 16th place at all editions including their latest appearance in 2013 in the UAE. 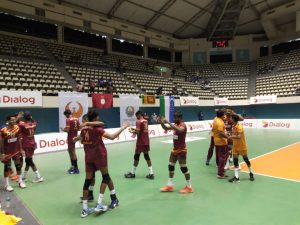