However, they only reached the second round at the 2019 Katara Open where they lost to Qatar’s leading side Cherif Younousse and Ahmed Tijan.

Cherif and Ahmed are seeded 10th, the highest ranked home team and they will want to improve on the bronze they won in 2018.

Their most recent World Tour medal came at the 2019 Xiamen 4-Star where they won bronze and they also won the Asian Beach Volleyball Championships that year.

The Netherlands’ Alexander Brouwer and Robert Meeuwsen are seeded second, and the USA’s Phil Dalhausser and Nick Lucena are seeded third.

Both teams have enjoyed success in Doha. Brouwer and Meeuwsen won gold in 2018, while Dalhausser and Lucena won silver in 2019.

Esteban and Marco Grimalt beat Dalhausser and Lucena in the 2019 gold medal match. It was their first World Tour gold, but the Chilean cousins have failed to return to a World Tour podium since then with fourth place at the Espinho 4-Star their best finish.

The men-only tournament will run from March 9-13 at Katara Cultural Village in the north of the city. It is the second of 11 4-Star events on the 2019-2020 calendar and the winners will leave with 800 ranking points. 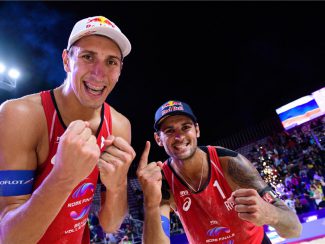