Hagatna, Guam, March 7, 2020 – Two pairs each from the USA and Japan will contest the semifinals at the women’s Guam Beach Cup 2020. 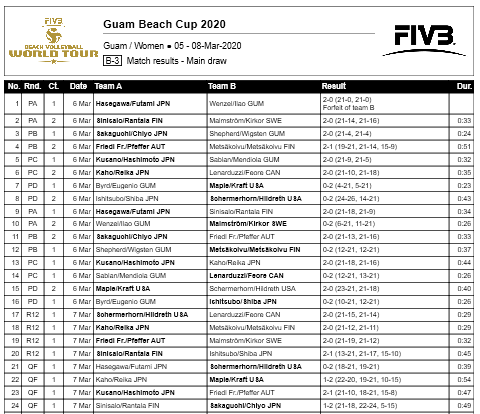 Three of the four final pairs, two from Japan and one from the USA, are still unbeaten in the competition.

Sarah Schermerhorn/Kimberley Hildreth of the USA, Kaho Sakaguchi/Reika Murakami of Japan, Franziska Friedl/Eva Pfeffer of Austria and Ida Sinisalo/Anna Rantala made it into the quarterfinals after winning their matches in the round of 12.

They met the top seeds from Pools A, B, C and D in the quarterfinals. Only Schermerhorn/Hildreth survived into the semifinals after defeating Akiko Hasewa/Azusa Futami, 21-18 and 21-19.

The second pair to guarantee its place in the final four was Delaynie Maple/Megan Kraft of the USA, who continue to surprise in the tournament. The 17-year-old duo beat Japan’s Kaho/Reika, the winners of the one-star in Tel Aviv in 2019, in three sets.

Maple/Kraft will meet Schermerhorn/Hildreth, a team they’ve already beaten earlier in this competition’s Pool D matches, in the semis.

The second semifinal will be contested by Japanese pairs Ayumi Kusano/Suzuka Hasimoto and Yurika Sakaguchi/Chiyo Suzuki.

Kusano/Hasimoto defeated Friedl/Pfeffer in a three-set quarterfinal. The Japanese team won the first set, 21-10, but then the Austrians fought back and won the second set, 21-18. Kusano/Hasimoto took the third, 15-8.

Sakaguchi/Chiyo beat Sinisalo/Rantala in three as well. Sakaguchi/Chiyo lost the first set by three points, 18-21, but then recovered to take the win after two more sets, 24-22 and 15-5.

With the semifinals set, a USA versus Japan final is guaranteed.

In gold medal matches on the FIVB Volleyball World Tour, the USA has a 1-0 win record against Japanese women. That dates back to 1996 in Pusan, Korea, when Lisa Arce/Holly McPeak defeated Yukiko Ishizaka/Yukiko Takahashi.

Since the start of the FIVB star system in 2017, women’s pairs from the USA have won nine one-star titles. Japan is second with seven, the Netherlands third with five. 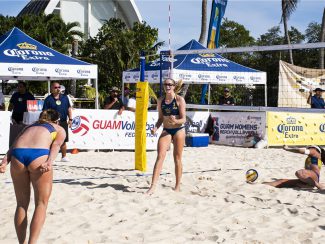