Lausanne, Switzerland, April 25, 2020 – This is the second article in a three-part series with the 2019 FIVB Beach Volleyball World Championship bronze medallists from Australia, Mariafe Artacho del Solar and Taliqua Clancy.

Taliqua Clancy is undoubtably one of the best beach volleyball players in the world. Her athletic capabilities are a rare find even at the very top of the sport. She also possesses a competitive streak and stubbornness that make opponents vulnerable. And if you add those qualities to the calmness held by Mariafe Artacho del Solar, her teammate, it is no surprise that Australia are at the very top of the game.

The Aussies claimed World Championship bronze in 2019, but also won the 4-star events in Chetumal, Mexico and Warsaw, Poland. They played eight FIVB events in 2019, only finishing outside the top four twice. Something that Clancy puts down to goal setting, expectations and being able to reset.

“It all started at the end of 2018, when we sat down and set goals for 2019 and I feel that from that moment we just hit the ground running. We learnt a lot from the 2018 season and we noticed the area of growth and we set really high expectations for the results we wanted from the 2019 season. That is a massive strength of our team. We reset after every tournament and that helps us achieve great results.”

Clancy says her team have ‘shown a lot of growth and showed a lot of resilience’ in a season when her partner, Artacho del Solar, was sidelined with an MCL (Medial Collateral Ligament) injury which stopped the team competing for almost four months, an injury sustained in the first knockout game of a World Championships where they went on to win that bronze medal.

“Obviously there’s always adversity in sport and that happened when Mariafe got injured at the World Champs, but I think that was a really big moment for us as a team, to show that resilience and to go through that adversity. We learnt a lot as a team in those moments, but huge credit to Mariafe for playing at such a high level to get us to that bronze medal.”

The injury meant the team missed out on participating at the 5-star events in Vienna, Gstaad and the World Tour Finals in Rome.

“Missing a large amount of the season post World Champs was unfortunate for us. We were really hoping to get our first medal as a team at a 5-star event, but it was definetely the right decision to come home and for Mariafe to start rehab. It was also fortunate that we had a great start to the season and we didn’t have to worry so much about Olympic qualification in those months off.”

In our interview with Mariafe Artacho del Solar she said it was Clancy’s attitude which helped the team through the Round of 16 match in Hamburg. Clancy admits that at the time she was unaware of quite how serious her partner’s injury was, but both players knew this was a huge opportunity for them as they eventually became the country’s second female team to medal at a World Championship since Australia’s Natalie Cook and Nicole Sanderson took bronze in Brazil in 2003.

“I remember the moment Mariafe injured her knee in the Round of 16, but I didn’t realise the severity of the injury in that moment. She mentioned it but I feel so rude because I just said ‘you’re fine, its ok, you’re ok’ – it was only after that game that I learnt how severe the injury was. So I was shocked to find out that she did her meniscus. We are lucky to travel with a great physio, alongside having a great medical team back in Australia and we had confidence in knowing that the right steps were going to be taken whether we were going to be continuing or not. In Mfe’s mind there was no way that she was going to stop playing, but personally there was a lot of worry about what was going to happen and it was a bit heartbreaking at that moment not to know whether we could continue in the tournament, especially as we started the 2019 season so well and had already won the gold medal in Warsaw. So it felt like the opportunity we had might be slipping away.”

The emotions in Clancy’s words were rapidly quashed as the team needed to act quickly and make a decision, with a match against Switzerland’s Joanna Heidrich and Annouk Verge-Depre on the horizon. A win would take them into the quarterfinal and with the injury to Artacho del Solar, Clancy also needed the help of head coach Kirk Pitman and assistant Brad Tutton to help support her and prepare the team for the rest of the tournament.

“The morning of the game against Switzerland, we sat down and decided as a team that we were going to continue competing and that as soon as our feet hit the sand it was game time. We learnt as a team that it made us stronger, we already had that 100 per cent trust in our team and each other. I think personally the main battle I had to go through was maintaining my performance and I relied a lot on Kirk and Brad to help keep me in that good mindset. I don’t want this to sound horrible, but I had to disattach myself from Mariafe’s injury to make sure that I was still able to play at 100 per cent. I didn’t want to step on to the court and feel like I had to worry about Mariafe’s injury. I wanted to step on the court and still be the strong player I am, whilst at the same time still be supportive towards Mariafe and the challenges that she was going though. I felt like I had to rely on Kirk and Brad for a lot of guidance to stay on track and keep delivering.”

Clancy lightens the mood to explain that another issue with Mariafe’s injury was hiding it from the opposition, so they could stop news of the injury creeping out to the other teams.

“This one moment I will never forget. The morning after her injury – when we were walking to breakfast – she was limping in the hallways. Then we got out to the front of the restaurant and she just walked in like a total boss, no limp. It was amazing she hid it so well, we were also grateful it was cold and we could wear leggings.”

The team may have had to watch some of the sport’s biggest competitions of the year from home, but it was business as usual once Artacho del Solar had returned to fitness with the team taking fourth place at the 3-star event in Qinzhou, China, before the pair topped the podium in the last event of the year in Chetumal. Two results that alongside Hamburg, Clancy draws confidence from.

“I think a great strength of our team is being able to reset for every tournament and every game and taking things point by point, and I think that’s why we managed to have a great success in Chetumal, which was amazing because coming back from Mariafe’s injury there is level of the unknown, and that can be scary. But I feel like we have such great trust in our team and we just enjoyed being back out on court together because there was a little bit of FOMO related to all the 5-stars at the back end of the season. Going to China and getting a fourth made us more hungry to get back on the podium in Chetumal.”

The 27-year-old from Queensland wants to continue playing until 2032 when the Games could be held in Brisbane. By that time, it could be her fifth Olympics and in her own words she ‘would love to compete at a home Games’. But at the moment though, she is still looking at the smaller picture and how she can improve her skills day by day. Clancy took a fifth in Rio de Janeiro in 2016 with Louise Bowden, playing as defender.

“I am always trying to grow and get better at all my skills. This pre-season there has been a new focus on my serving and the jump float. It is a newer skill for me as I just had my jump serve. Kirk has done some video analysis and found a little tweak with my technique which has been awesome. Blocking is something I will always be working on, just being able to take more court and make Mariafe’s job a little bit easier. It is still a new skill and something I have only been focusing on since 2017, so I am always trying to get better at that.”

When asked about what makes her Artacho del Solar tick, Clancy says: “We have the upmost trust in each other and we just stay very much in the moment and the present. And it is definitely one of the biggest strengths that Mariafe has brought into my game, just to be very present and in the moment.”

This is Clancy’s second Olympic journey after that fifth in Rio with Bawden and guided by coach Steve Tutton. When asked how this team compares with the her previous one, Clancy expressed gratitude and saw a number of similarities.

“In a lot of ways our journey is not too dissimilar with the previous journey with Lou and Steve. We are making the journey our own and matching our high expectations and standards with results. The big difference is me. I was just so much younger. It was my first time playing on the World Tour, it was my first Olympic qualification, and my first Olympics and I’m just so thankful for the patience and all the learnings that Lou and Steve gave me over those four year. Honestly they were just the best and I can’t put into words how amazing they were and how much I cherished our team and what we were able to create.”

When asked if there was one game she remembers more than another, the question was supposed to highlight one specific high point in her career. Instead in typical Clancy fashion, she chose a game that helped drive her forward into the future.

“I feel like I cherish all the events that we have been able to win and podium in, but I feel as if as an athlete you are always looking for the next success and the next thing you can achieve. So I feel like the game that stands out to me the most is the one in Rio, the quarterfinal of the Olympics against April Ross and Kerri Walsh Jennings. It just motivated me so much to keep improving and keep getting better, it is still so bitter-sweet, and it’s a massive motivator for myself to keep improving and get a better result in Tokyo.” 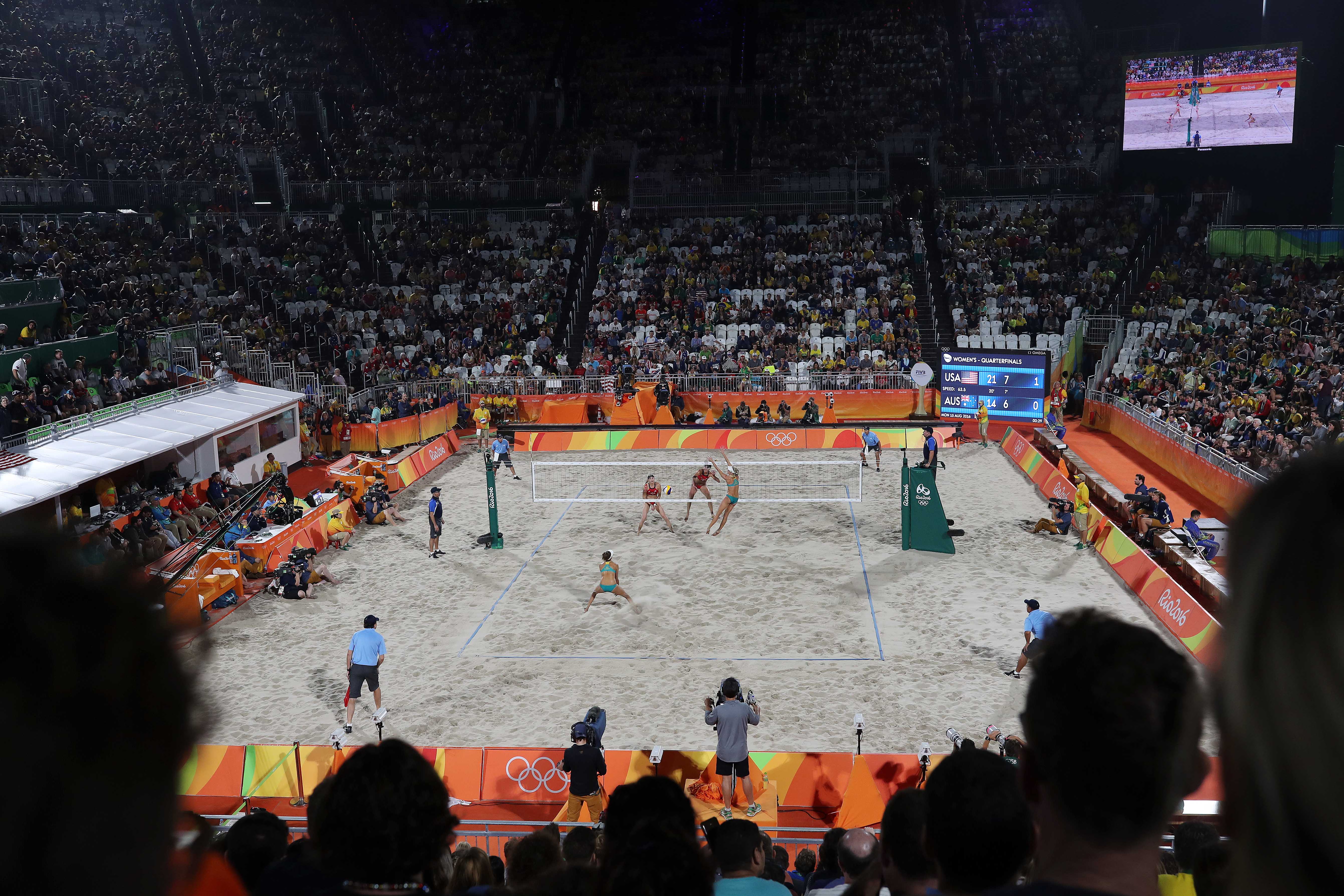 A key motivator for Clancy: the quarterfinal match against April Ross and Kerri Walsh Jennings at the Rio 2016 Olympic Games

MILAD EBADIPOUR: A DRIVING FORCE TO BE RECKONED WITH 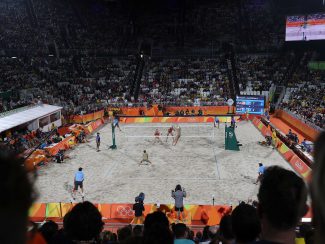 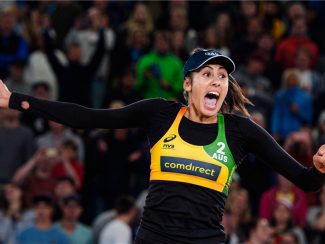