Manila, Philippines, December 3, 2019 – Perennial champions Thailand got their title defence at the 30th Southeast Asian Games off to a winning start, as talented Tran Thi Thanh Thuy powered Vietnam to an epic five-set win against hosts Philippines on the opening day of the round-robin women’s volleyball competition at Philsports Arena in Pasig City. 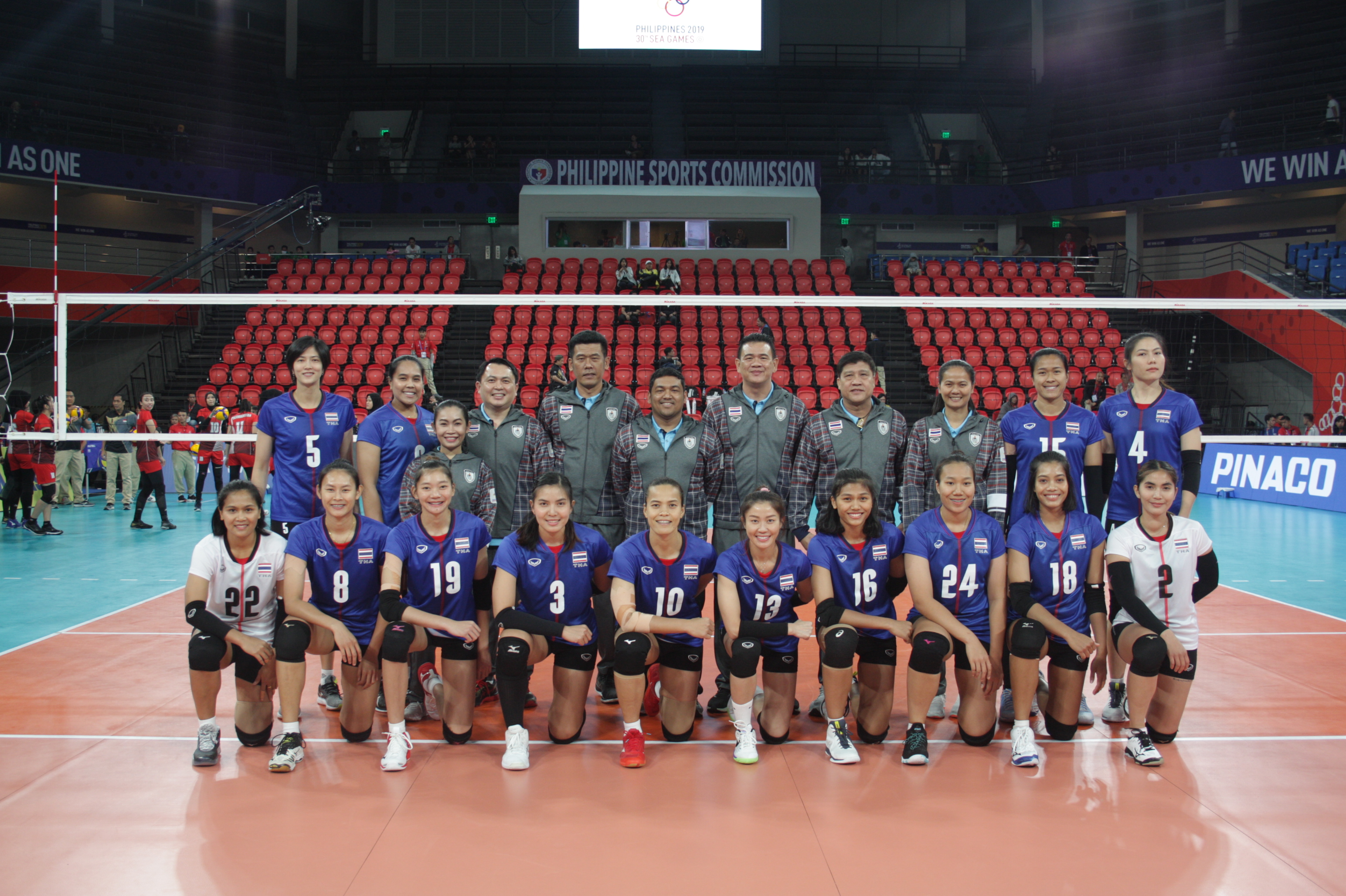 Thailand, current world No.14 and silver medallists at this year’s Asian Senior Women’s Championship in Seoul, Korea, fielded a formidable lineup in the 30th edition of the biennial multi-sport extravaganza with the aim of retaining their title, which will become their 14th gold medal in the SEA Games history.

The Thai players included highly-experienced Nootsara Tomkom, who won the Best Setter Award at the Asian meet, star spiker Pleumjit Thinkaow, Onuma Sittirak, Wilavan Apinyapong and Malika Kanthong, all of whom competed in the Thailand team which had won the Asian Championship twice in 2009 and 2013 in Vietnam and on home soil in Nakhon Ratchasima respectively. Young guns including hard-attacking Ajcharaporn Kongyot, Pimpichaya Kokram, Thatdao Nuekjang and Chatchu-on Moksri are also ready to fill the senior players’ shoes when they will call it a day in the near future. 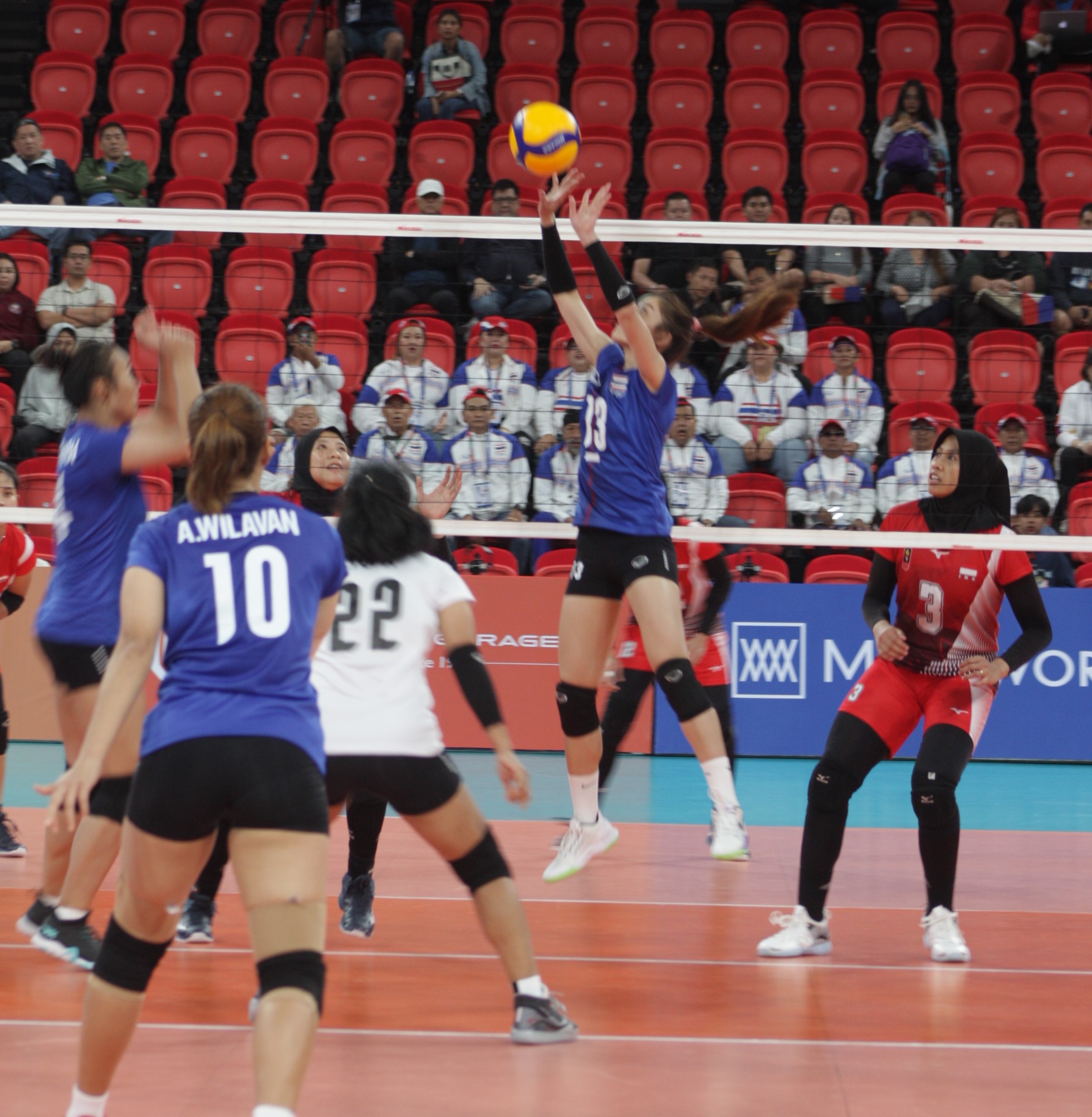 Against Indonesia in their opening clash and the 2017 final rematch, Thailand rested star spiker Pleumjit Thinkaow and the injury-hit Onuma Sittirak, allowing veteran Wilavan to lead the charge.

Straight off the mark, Pimpichaya and Wilavan were on target and the rivals struggled as they were being picked apart by the high-flying hitters. Going down the first two sets 13-25 15-25, the Indonesians tried to claw back into the game with a last-ditch effort in the third set. However, the set turned a completely one-sided battle as Thailand mercilessly crushed them 25-9 to breeze past Indonesia with a comfortable straight-set win.

Thailand will next take on hosts Philippines on Thursday, while Indonesia will go up against Vietnam.

In the second set, around 6,000 home fans thronged into the competition venue to boost Philippines’ morale in their tough match against Vietnam, bronze medallists at the previous Games two years ago in Kuala Lumpur, Malaysia. 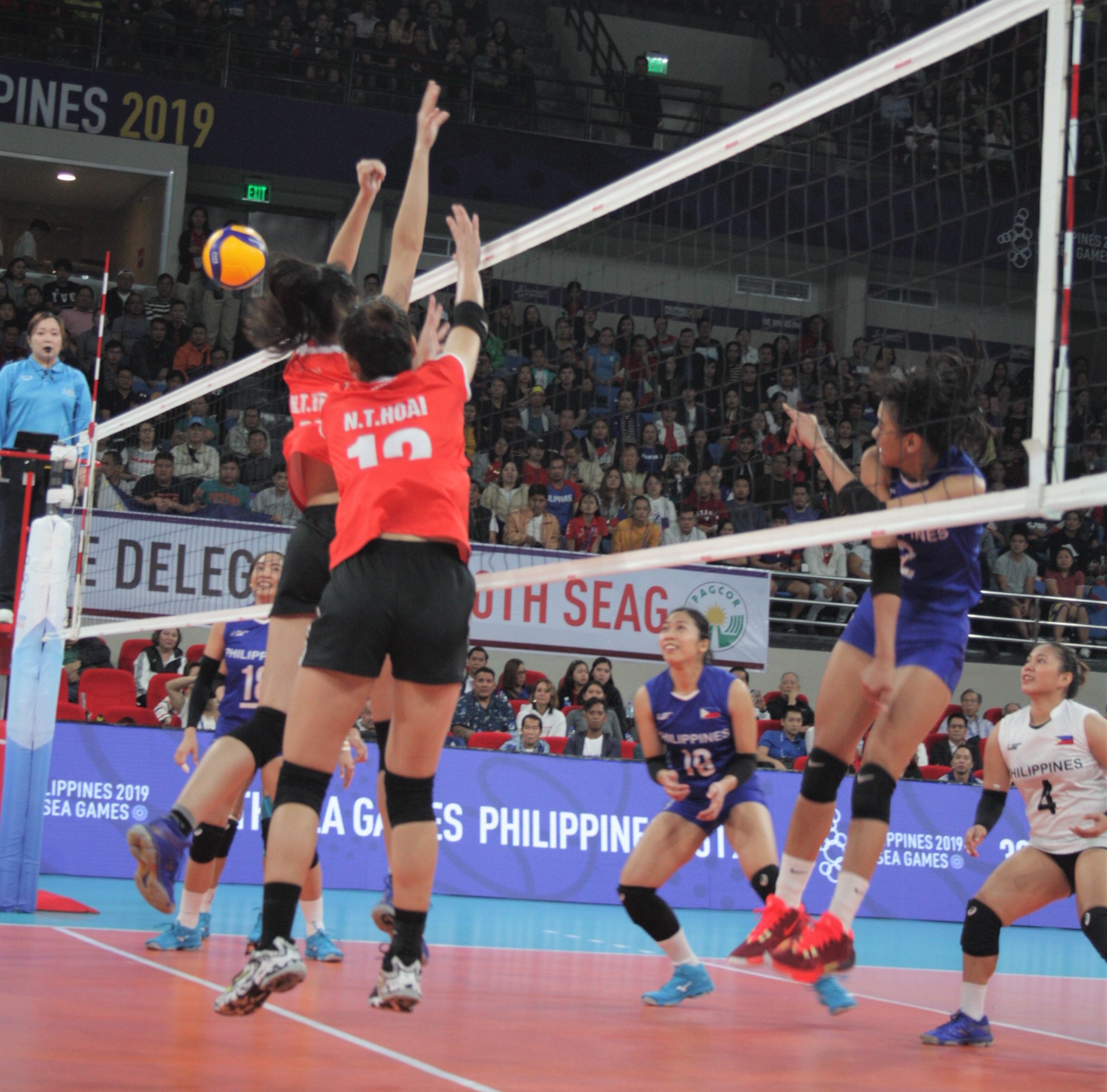 Philippines delighted the huge crowd in Philsports Arena with the first-set win 25-21, but things started to turn sour for the host side when Vietnam, steered by powerful attacker Tran Thi Thanh Thuy, regained their composure to take the next two sets 25-23 25-19. Prolific Alyssa Valdez performed superbly to bring the hosts back on track as she spearheaded her majority of her team’s attacks. Philippines bagged the fourth set 25-20, forcing the strong visitors to work overtime in the decider. However, Vietnam fared much better at home stretch for an eventual 15-8 win in the set and match. Tran Thi Thanh Thuy recorded a team-high 27 points for Vietnam including 26 attacks from 73 attempts, while Alyssa Valdez topscored with 22 points from 20 attacks and 2 aces for Philippines. 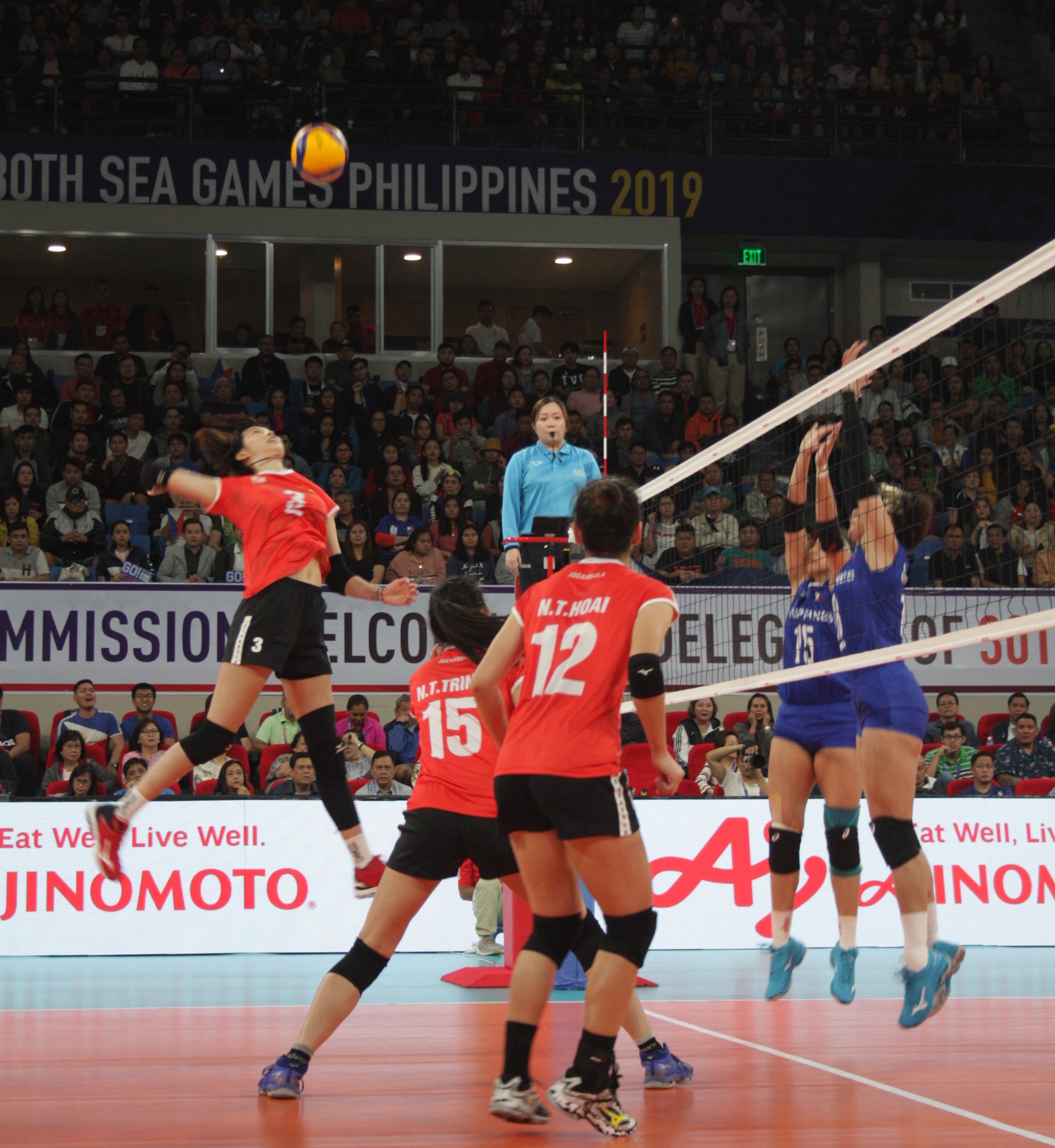 For Vietnam, the hard-fought win was a sweet revenge for the loss to the Philippines two times in a row in this year’s Asean Grand Prix comprising a 2-3 loss in the first leg in Nakhon Ratchasima, Thailand and a 0-3 loss in the second leg in Santa Rosa, Philippines.

The women’s teams will have a rest day on Wednesday and the men’s sides will kick off their second-day campaign, with Myanmar taking on Singapore in Pool A. In Pool B, Cambodia will challenge Indonesia and Philippines will play Vietnam. 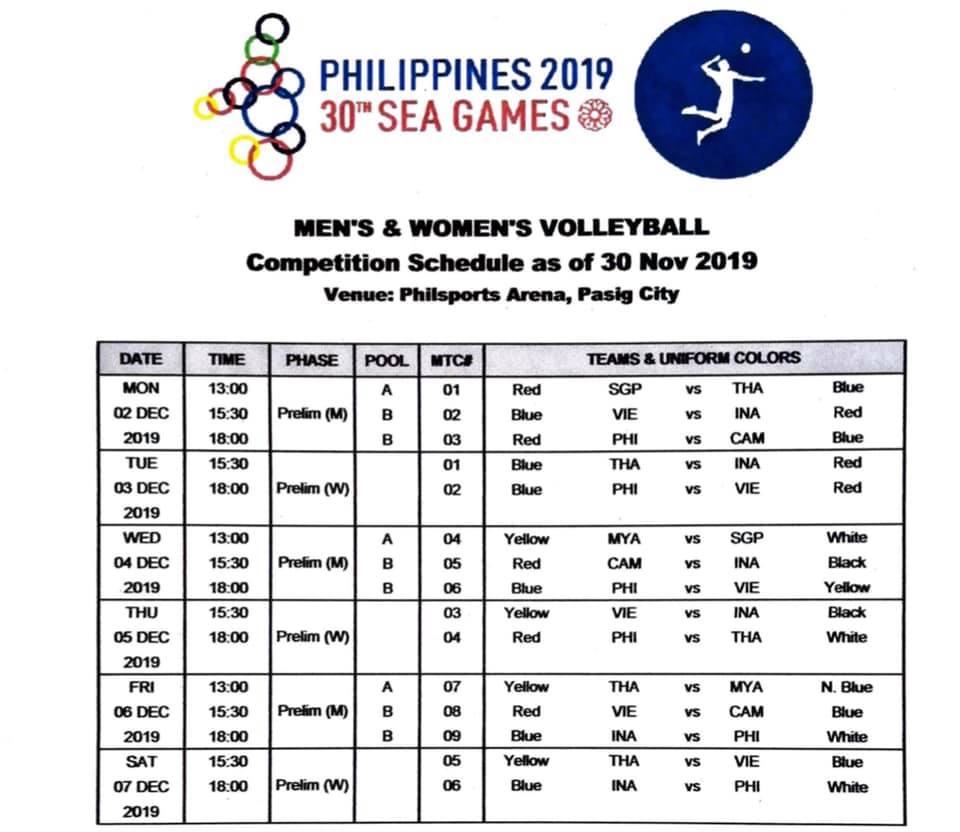 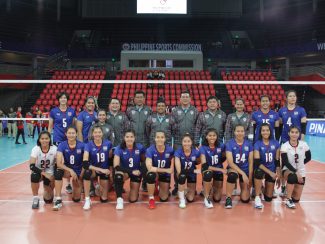 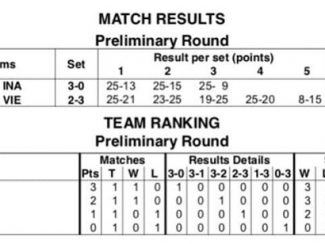 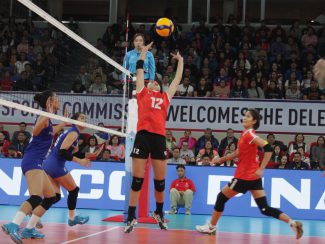 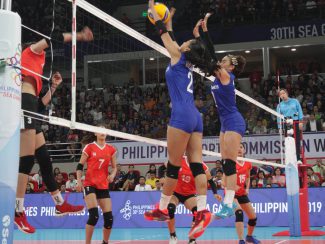 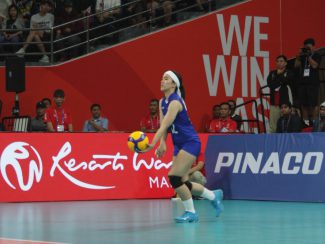 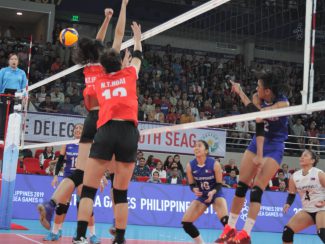 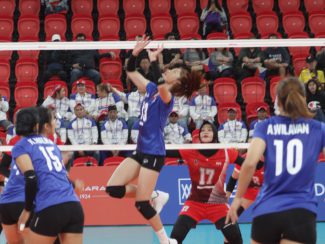 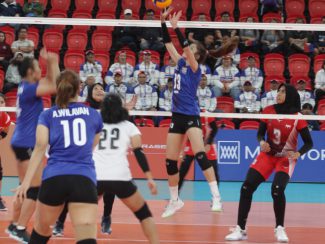