Kathmandu, Nepal, December 3, 2019 – India made a clean sweep of both gold medals up for grabs in the men’s and women’s events at the 13th South Asian Games volleyball competition at the Tripureswor Covered Hall here on Tuesday, with their women’s team stunning hosts Nepal in hard-fought five-set thriller.

At the previous Games in Guwahati in February, 2016, hosts India captured the men’s title, with Sri Lanka and Pakistan claiming silver and bronze medals. This time, critics had it that although India remained hot favourites to defend their title and despite the fact that Sri Lanka took bronze medal this time, the Indians’ expectation to repeat the similar feat at the 2019 South Asian Games in Nepal wouldn’t be that easy considering the India’s disappointing results against the fast-improving Pakistan. 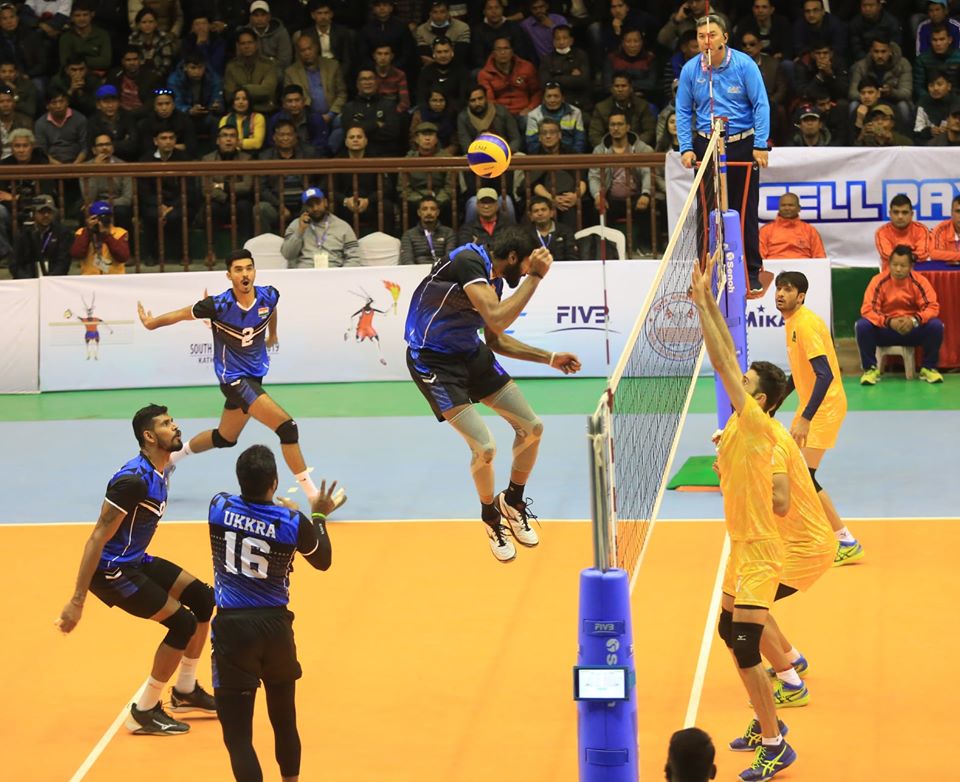 India went down 1-3 to Pakistan in the 7th-12th playoffs match at the 2018 Asian Games in Jakarta, Indonesia which resulted in a distant 12th place India had finished in the Asiad. Pakistan defied the odds to return with the 8th position. 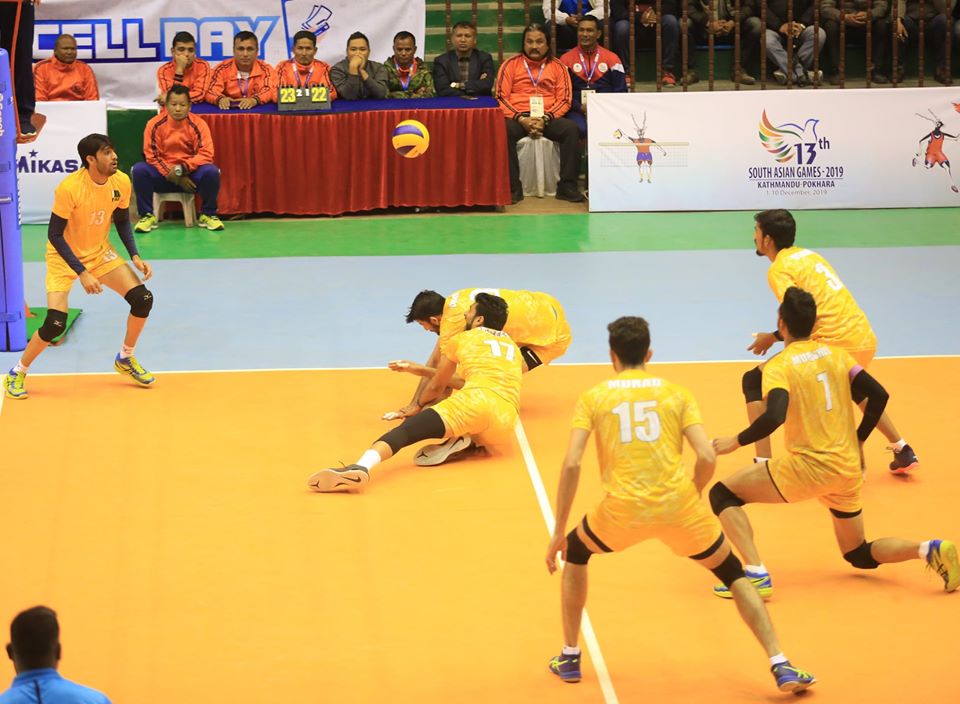 At the recent Asian Senior Men’s Championship in Iran, India once again faced difficult situations against Pakistan. Contesting the 7th-8th playoff match, India recovered from the first two sets down against Pakistan to force a decider, but the outcome remained 3-2 in favour of the Pakistani side. Pakistan finished 7th place in the competitive competition, leaving India to come in 8th position. 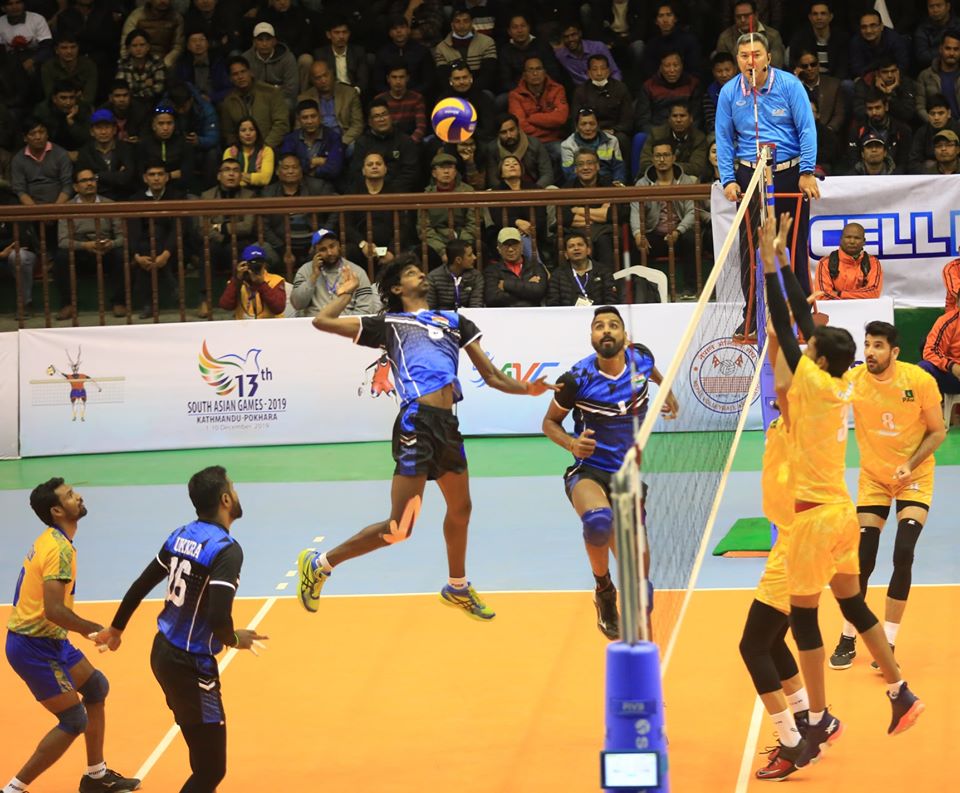 However, India came back much stronger this time under the close supervision of head coach G.E. Sridharan, a former India men’s national volleyball team player from Tamil Nadu, who received Arjuna Award in 1982 and Dronacharya Award in 2008.

Against Pakistan in a highly-anticipated showdown, India fielded a strong lineup led by powerful hitter Jerome Vinith, Amit and Chandra Ajithlal. Nonetheless, the Indians made a poor start with several unforced mistakes to go down 20-25 in the first set but maintained their poise to cruise more comfortably to win the next two sets 25-15 25-17 for a commanding 2-1 lead. The fourth set turned out to be an intense battle which saw both sides pour everything to win the set. India played more steadily to capture the hotly-contested set 29-27, 3-1 match and gold medal.

In the women’s event, India survived a scare from Nepal, the team they had already beaten in straight sets in the preliminary Pool A match. The Indians still played well to eventually put it past the fighting hosts in exhausting five sets 25-17 23-25 21-25 25-20 15-6. India successfully defended their crown, smashing the hosts’ dreams of winning another major tournament after they had captured the recent Asian Senior Women’s Central Zone Championship in Bangladesh. 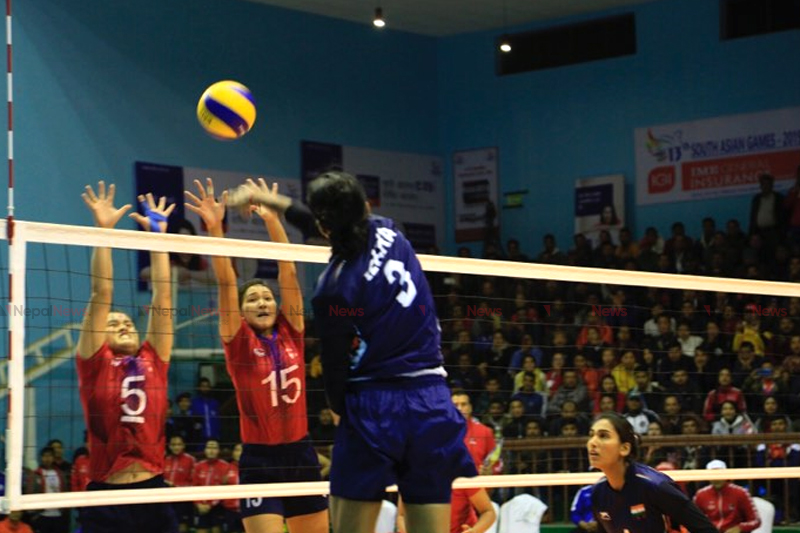 Despite the loss, hosts Nepal still had something to be pleased with. The well-earned second place and the silver medal they won on home soil proved one step forward they have made in this tournament. At the previous Games in India, Nepal took bronze medal. 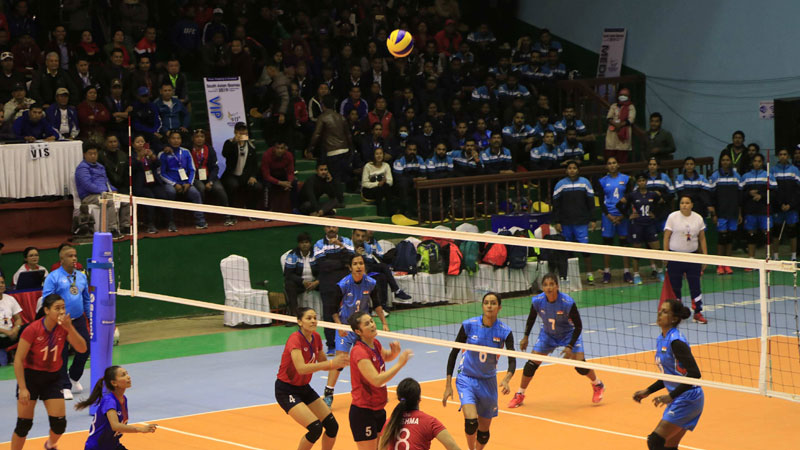 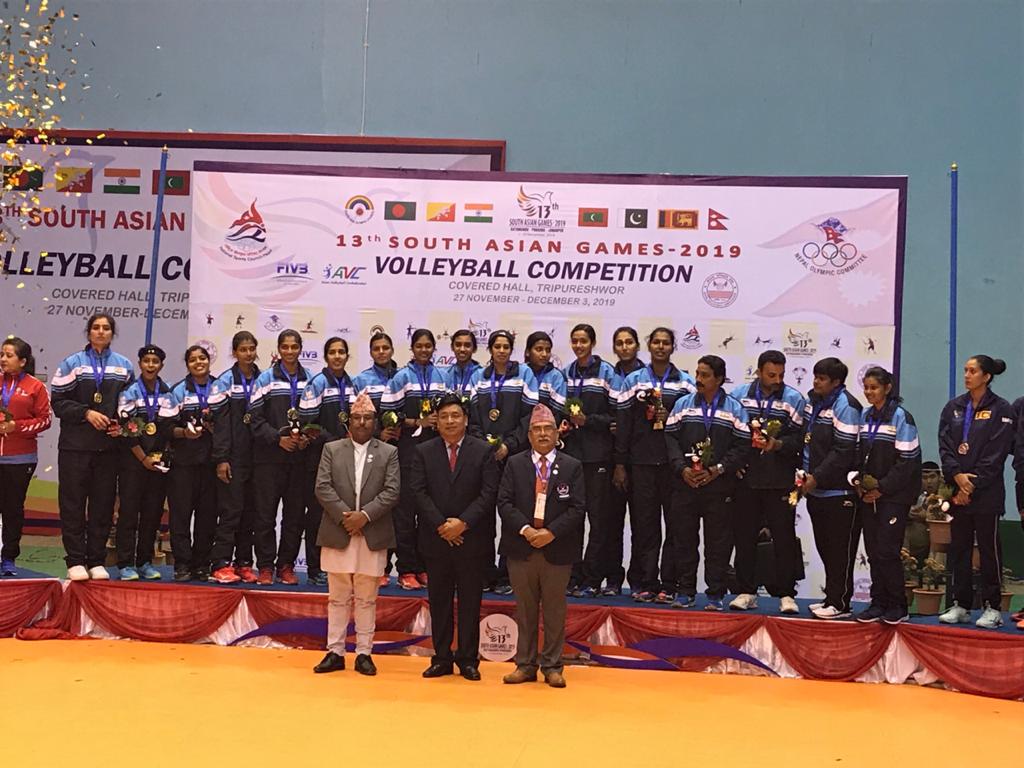 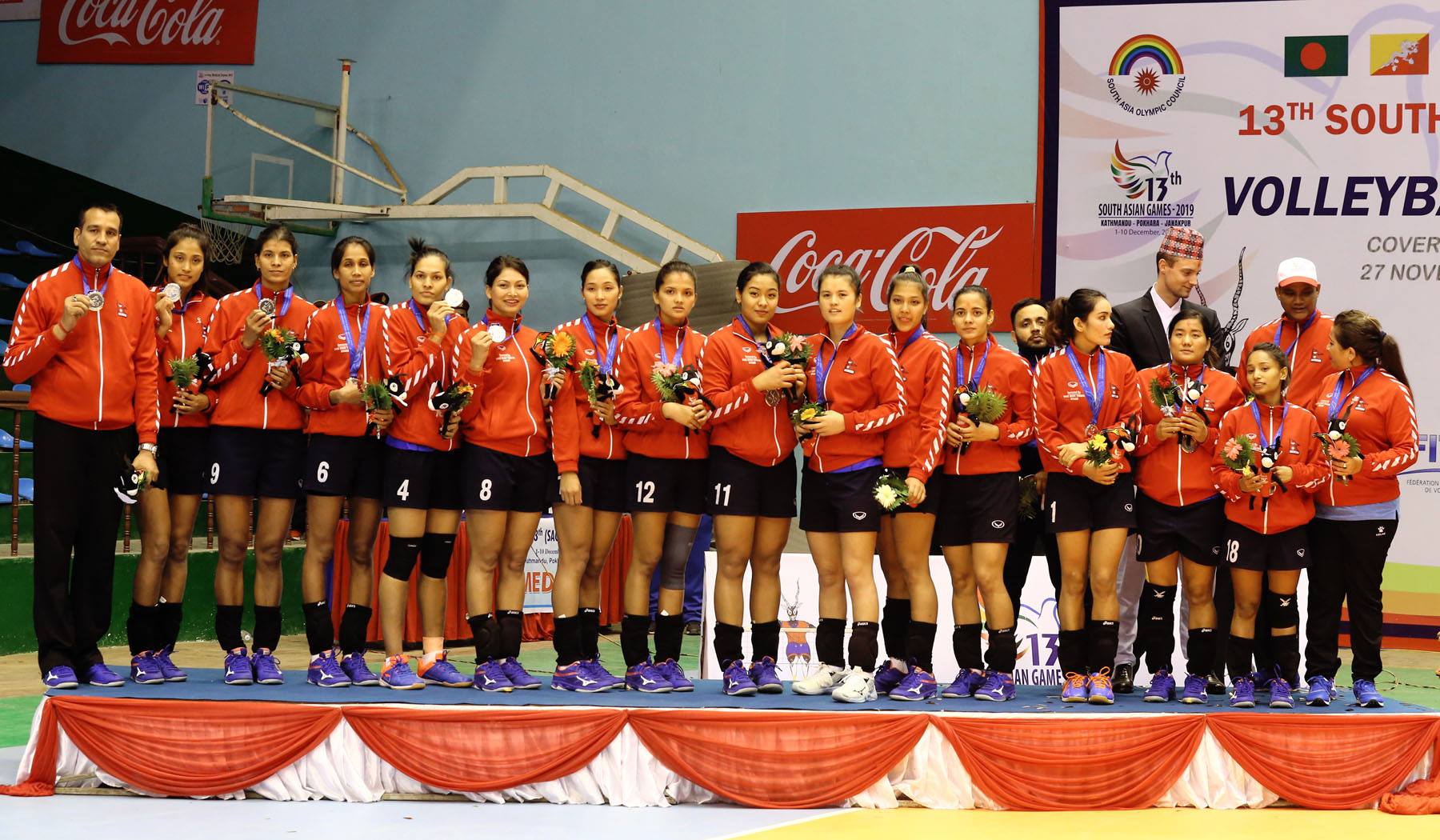 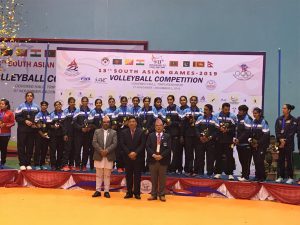 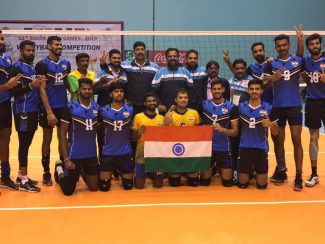 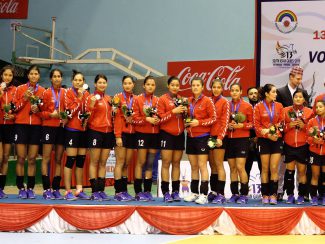 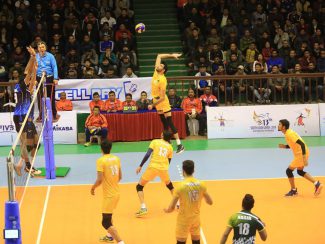 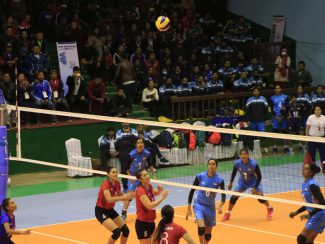 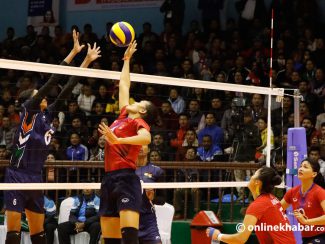 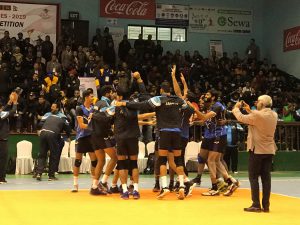 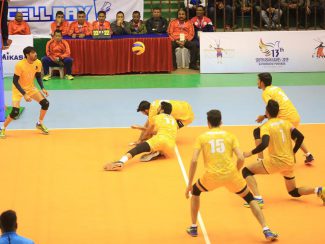 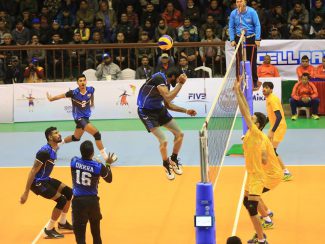 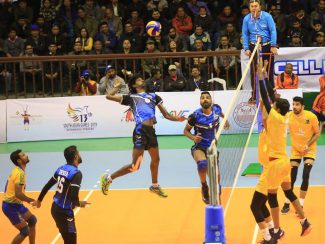 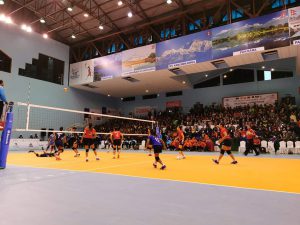 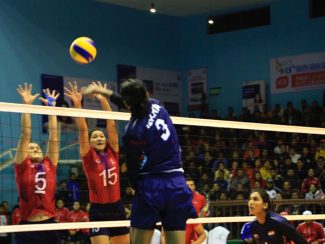 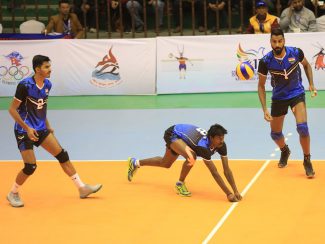 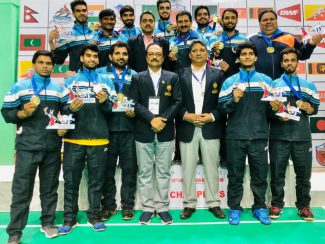