With similar play style, both teams presented long rallies often to excite the spectators time and time again. Kongyot Ajcharaporn highlighted the night with a match-high 17 points for Thailand followed by Moksri Chatchu-On with 12. Captain Chang Li-Wen also scored remarkable team-high 15 points for Chinese Taipei, but their inferiority in blocking and over-many mistakes resulted in the straight-set loss.

Thailand had a slow start but they soon came back to a 8-5 lead at the first technical timeout. With the attacking trio of Thinkaow Pleumjit, Kongyot Ajcharaporn and Moksri Chatchu-On, they firmly controlled the situation and smoothly secured the first set win in 25-16. Benefiting from their enhanced service, Chinese Taipei quickly built a 4-0 lead in the second set. Thailand fought back to register their first point but a sudden blackout interrupted the match. After the recovery of power supply, Thailand chased all the time behind until 12-12 tie. Moksri Chatchu-On stood out and brought the host team to their first lead in 14-13 with a penetrating spike. Thereafter, they played more confidently and grasped the tough set in 25-21 following two points in a row by Kongyot Ajcharaporn.

The third set appeared the same pattern as Thailand fought hard to catch up to 9-9 tie. From then on, they again reversed the situation and pulled away to win the set in 25-16.

“It was our first game of the tournament at home, so I think we started a little bit nervous especially in the beginning of the first and second sets. So to bring the players potential and our level back was quite difficult. I had to encourage them more and I am glad that finally we came back to our own game. This tournament is very important for us, so we need to focus a lot more. We have to improve more on the side-out and service reception.” said Thailand head coach Danai Sriwacharamaytakul. 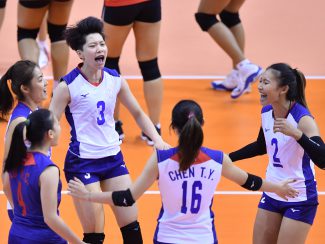 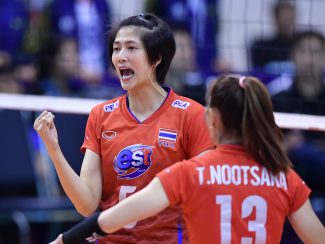 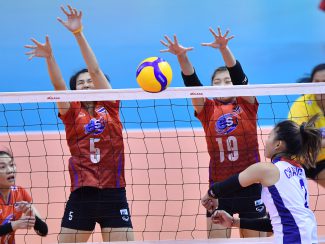