Bangkok, Thailand, March 12, 2019 – Thailand will field its fully-fledged team including seven veterans in two matches against Korea in the Korea-Thailand Pro Volleyball All Star Super Match on April 5 and 7.

The first match between Thailand, gold medallists at the 2009 and 2013 Asian Championships, and Korea, champions at the 2014 Asian Games in Incheon, will be held at the Terminal 21 Shopping Mall Gymnasium in Nakhon Ratchasima on coming April 5, with the second encounter taking place at the Hua Mark Indoor Stadium in Bangkok on April 7.

“Two matches between Thailand and Korea will be held on April 5 at Terminal 21 Shopping Mall in Nakhon Ratchasima and April 7 at Hua Mark Indoor Stadium in Bangkok. Undoubtedly, both teams will field their world-class players to compete against each other,” said Mr Somporn.

“For Thailand, the national players now playing for their own clubs in the Thailand League and Thai-Denmark Super League will come together and play in the same team Thailand for their very first time of the year. After this, they will play together in the Thailand team for the whole year for all major competitions including the VNL, the FIVB Volleyball Women’s Intercontinental Olympic Qualification Tournament and the Asian Senior Women’s Championship. It’s possible that Thailand and Korea will compete against each other more than once this year. Therefore, the April 5 and 7 matches will be spectacular battles fans should not miss.”

According to the TVA President, the Korea-Thailand Pro Volleyball All-Star Super Match 2019 will see seven veterans join the Thailand team for the first time in five years. Pleumjit Thinkaow, Nootsara Tomkom, Malika Kanthong, Onuma Sittirak, Wilavan Apinyapong, Amporn Hyapha and Wanna Buakaew played in the Thailand team which claimed gold medals at the 2009 and the 2013 Asian Championships in Hanoi, Vietnam and at home in Nakhon Ratchasima respectively.

Mr Shanrit said, “The Korea-Thailand Pro Volleyball All Star Super Match was first held by the Thailand Volleyball Association in conjunction with the Korea Volleyball Association and the Korea Volleyball Federation with the aims of promoting mutual understanding and cultural exchange apart from strengthening cordial ties between the two countries and sharpening skills of their players. The previous Korea-Thailand Super Match had positive feedbacks, with a large number of spectators thronging into the competition venue to watch the match. The situation is expected to be the same this year. By competing in the Super Match, both teams will have a chance to learn each other ahead of their important clashes later this year.”

Thailand’s Channel 3 TV as the Official Broadcaster will televise both matches live on April 5 and 7.

“Last year, Channel 3 received a broadcast signal from Korea and brought it for live broadcast in Thailand which drew huge TV rating. We will make it much bigger this year since Channel 3 will televise both matches live. Our broadcast and production will meet international standards with Full HD picture quality. Channel 3 artists including actress and singer Prim Prima Bhuncharoen and Limesoda Members from Korea will also perform in a mini concert during the matchday,” Mr Charkrit was quoted as saying.

In 2017, visitors Korea beat Thailand 3-2 at the debut Korea-Thailand Pro Volleyball All-Star Super Match at Hua Mark Indoor Stadium in Bangkok and Thailand avenged the loss to the same rivals the following year when the visiting Thais beat Korea with the similar 3-2 margin at Hwaseong Indoor Arena in Hwaseong.

Thailand and Korea met for several times last year. Korea stunned Thailand 3-1 in Nakhon Ratchasima in the Volleyball Nations League Preliminaries Week 4 and Thailand regained the lost pride by avenging the same rivals with the similar 3-1 margin in the semi-finals of the 2018 Asian Games women’s volleyball competition in Indonesia.

In other tournaments, Thailand narrowly beat Korea 3-2 in the Pool C preliminaries at the FIVB Volleyball Women’s World Championship in Japan and hosts Thailand whipped Korea, represented by an unfancied team, 3-0 in the Pool A preliminaries of the 2018 AVC Cup for Women in Nakhon Ratchasima. 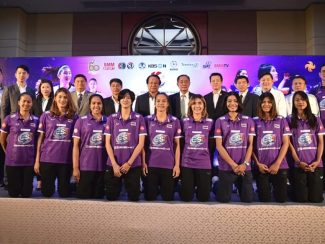