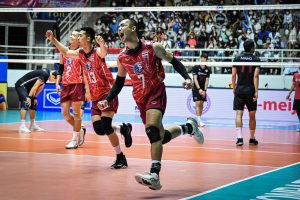 Before a large crowd of volleyball enthusiasts, Korea, current world No.33 and bronze medallists at the recent FIVB Challenger Cup in Seoul, got off to a brilliant start as Na Gyeongbok fired powerful mid-court attacks and Kwak Seungsuk and Kim Kyumin producing scintillating blocks for the team’s initial 7-3 lead. 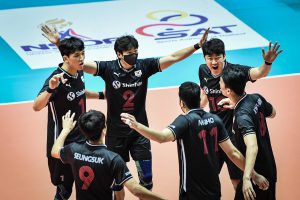 Thailand put their acts together and narrowed the margin 8-9, but their strong fightback was short-lived as Korea continued their great attacks to tear the Thai defence apart, using their height advantage and power at the net, to hold the host side off 22-15 and remained in that fine form to win the first set 25-17. 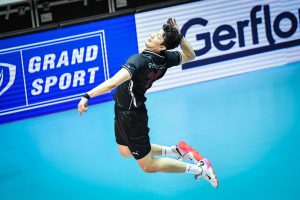 Conceding one set, Thailand regained their composure to come back much stronger in the second set to take a blistering run of points 6-2 under the thundering attacks from left-hander Amorntep Konhan and Napadet Bhinijdee. Korea gradually pulled their game together, with promising Im Donghyeok and Kwak Seungsuk taking turns firing aggressive attacks. 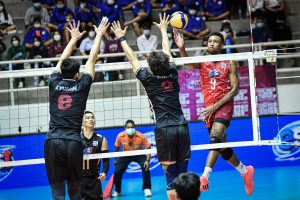 Korea, a side packed with talents, caught up with the Thai side 12-12 before Thailand surged ahead 18-14.  Things turned sour for Thailand as when they suffered from errors and a lack of communication, the Koreans bounced back in style to meet the home side again at 23-23. With greater experience and form, Korea controlled the game well to take the remaining two points to clinch the hard-fought set 25-23. 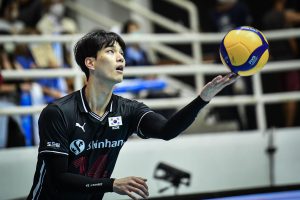 In the third set, Heo Subong, who weighed in 33 points in the Korea’s match against Australia in the FIVB Challenger Cup, Na Gyeongbok and Lim Sungjin spearheaded the team’s attacks. But Thailand, backed by cheering home crowds, came up with defensive resilience to stay in front 12-8. Moments later, Heo Subong was in incredible form, silencing the cheering crowds with a couple of aces to assist the team to reduce the margin 14-15. 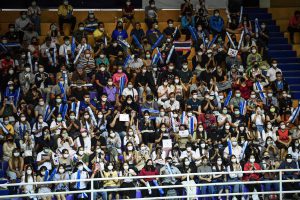 The host team remained aggressive to lead with a 4-point clear at 21-17, They improved on their attacks, while Korea started to collapse with unforced mistakes. An erratic serve by Na Gyeongbok delivered the set point for Thailand, but Lim Sungjin saved the day for Korea with his unreturnable attack. Napadet did not let the opportunity slip through his fingers as he fired a powerful off-the-block spike to end the Korean challenge in this set 25-19. 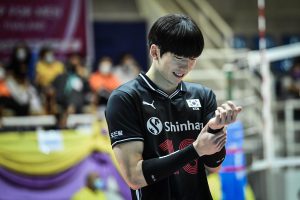 Confidence boosted after the set win, Thailand opened up with attacks and effective blocks to fight for every point in the fourth set which saw the leads go back and forth until 20-20. The host side poured everything they had to win the set and thanks to their improved defence, they advanced 23-21. A spike from Lim Sungjin went wide, handing Thailand the set point 24-21. Korea tried hard to come back, but Thailand gathered their courage to foil their attempts. Thailand allowed the strong visitors two more points before Amorntep overcame the taller Korean blockers with his great attack to steer Thailand to the hard-fought 25-23 win. 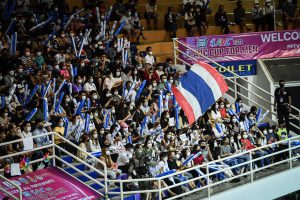 The decider was very tight, with Thailand leading the way. Korea intensified their defence to win crucial points and level 10-10, but the rhythm was with the Thais as they stormed on and eventually sprang a surprise with 15-12 win. 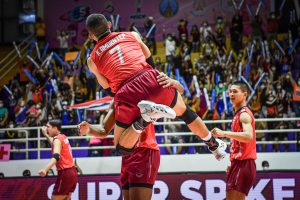 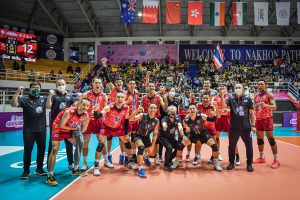 “Congratulations to my players. They played exceptionally well today with consistency and confidence. Despite having short times of training together, they performed well, helping each other while contesting the tough match against Korea. The result came out much better beyond my expectation. From now, my team are ready to face any team in the next round,”  Thailand head coach Monchai Supajirakul commented after the match. 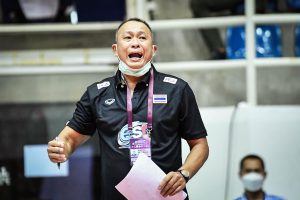