THAILAND, VIETNAM TO FIGHT IT OUT IN HIGHLY-ANTICIPATED CLASH FOR EVENTUAL TITLE IN 2ND ASEAN GRAND PRIX WOMEN’S VOLLEYBALL INVITATION

Nakhon Ratchasima, Thailand, September 10, 2022 – Hosts Thailand and Vietnam remained on course to storm into the final day of the 2nd ASEAN Grand Prix Women’s Volleyball Invitation with remarkable unbeaten record to battle it out for top honour on Sunday. 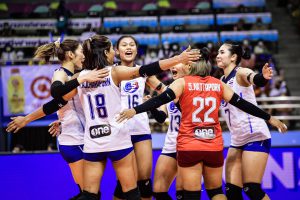 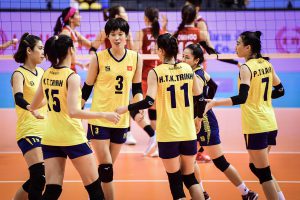 World No.14 Thailand, which reigned supreme in the two-leg inaugural ASEAN Grand Prix three years ago, and SEA Games archrivals Vietnam similarly sealed consecutive two wins without dropping a set to their respective rivals, with the former putting it past the fighting Indonesians in thrilling straight sets and the latter too strong to see off Philippines in one-sided encounter on Saturday.

Thailand had already played Vietnam for three times this year and it was the Thai squad which won them all. They beat the Vietnamese twice (preliminary match and final showdown) in the SEA Games in Hanoi in May. At the Philippines-hosted 2022 AVC Cup for Women in Pasig City, they beat the same rivals in the third-place playoff.

The Sunday’s matchup between the two unbeaten teams will determine the eventual winners in the  second edition of the ASEAN Grand Prix.

After two days, both Vietnam and Thailand had the similar performances of two straight wins against Indonesia and Philippines and did not drop a single set to their respective rivals. However, the Vietnamese had a better points ratio to stay atop the four-team standing. Thailand came in second place overall, with Indonesia and Philippines trailing in third and fourth places respectively. 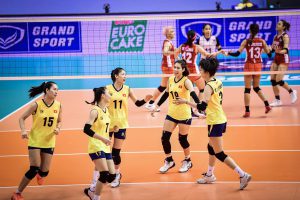 Against the Philippines, the team they had already beaten twice in straight sets consisting of the SEA Games in Hanoi in May and the AVC Cup for Women in Pasig City, Philippines last month, Vietnam, fourth place at the AVC Cup, fielded a strong lineup led by powerful Tran Thi Thanh Thuy, Hoang Thi Kieu Trinh and Pham Thi Nguyet Anh. 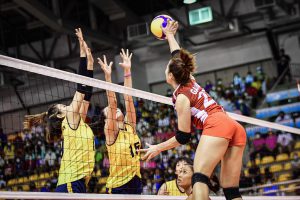 The opening set was one-way traffic, with Philippines simply blown away by a fierce Vietnam’s barrage – with Tran Thi Thanh Thuy and Tran Thi Bich Thuy too powerful from spike range. The Filipinas had no answer for the irresistible Tran Thi Thanh Thuy to go down 12-25. 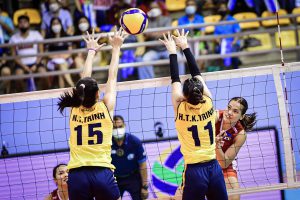 Philippines battled hard in the next two sets, but Vietnam were superior in every department to cruise comfortably 25-16, 25-16 in the second and third sets for the eventual 3-0 win. 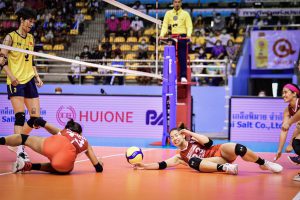 Tran Thi Thanh Thuy chipped in with 13 points from 11 attacks, one block and one ace serve for Vietnam, while Carlos Diana Mae led Philippines with 11 points. 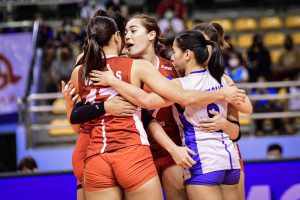 “It was a tough match and Vietnam played very well. In the first set, we had a poor reception, while the Vietnamese blocks were very good. We learned a lot from the match against powerful Thailand the previous day. And Vietnam are a good team now, experienced and powerful,” Philippines head coach Sherwin R. Meneses commented after the match. 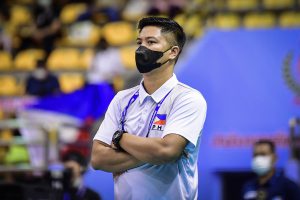 “In this match, I changed many players in the line-up because I would like my players to play in international tournaments. Mine is just a club team representing the Philippines but day after day we have to think and fight with other strong teams. I hope that we can do better tomorrow (Sunday) against Indonesia,” he added. 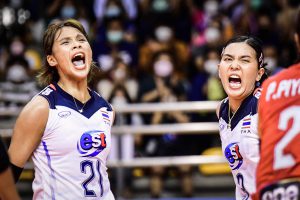 In the second encounter, Thailand, current world No.14 which bagged bronze medal at the recent AVC Cup for Women in the Philippines, overcame a sturdy challenge from Indonesia. 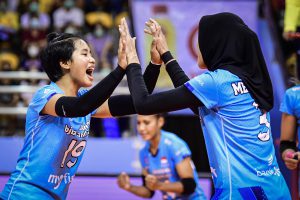 In the hard-fought first set, both sides fought neck and neck, but Indonesia, strengthened by powerful hitter Megawati Hangesri Pertiwi, Ratri Wulandari and Mediol Stiovanny Yoku, silenced the cheering home supporters with their superb form to surge into a three-point lead at 14-11. 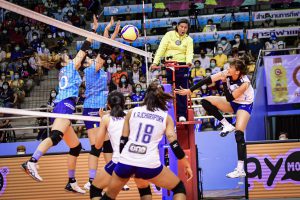 Thailand clawed their way back into game to level at 19-19 and replaced Thanacha Sooksod with Pimpichaya Kokram. The Thai team took the see-saw set 25-22, with Pimpichaya scoring three points in a row before Sasipaporn Janthawisut hammered a blow to end the Indonesia’s determined challenge. 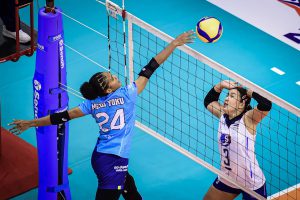 After that, Thailand turned things around to come up with spectacular attacks, effective blocks and well-placed serves to comfortably capture the next two sets 25-18, 25-13 and match. 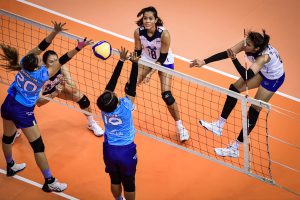 Ajcharaporn Kongyot scored a match-high 14 points from 11 attacks, 2 blocks and one ace serve for Thailand, while Pimpichaya Kokram and Thichakorn Boonlert contributed with 11 and 9 points respectively. 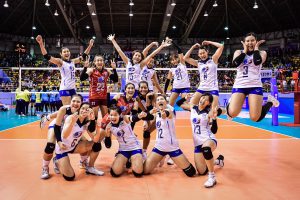