Jiangsu Zhongtian Steel shocked the home team to an 8-2 lead benefiting from their quality serves. After the technical timeout, Tianjin focused more on reducing the mistakes. They pushed Jiangsu hard enough to take the lead at the end of the first set on Li Yingying’s block and killing spikes. Unwilling to miss the good start, Jiangsu kept in the struggle till 27-28. However, following a spike-out, Jiangsu had to give up the first set in exciting 27-29.

The Rio Olympic gold medalist Zhang Changning fully opened fire in the second set, helping Jiangsu take a slim lead all the the way before they were trapped by the hasty mistakes in the middle of the set. Tianjin seized the opportunity to reverse the situation and concluded the second set 25-23, thanks to a wide-angled spike by Serbian Aleksandra Crncevic. 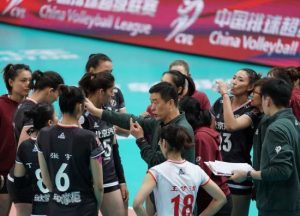 Holding a 2-0 advantage, Tianjin showed some slackness in the third set while Jiangsu maintained a steady form to build a 17-6 lead after scoring 7 points in a row. It was too late for Tianjin to reverse the situation once again and Jiangsu took back one set in 25-21.

The fourth set showcased flashes of attacks by Li Yingying and Zhang Changning for each side. But strengthened defense of Tianjin at the final crucial moment disturbed the attacking rhythm of Jiangsu. Tianjin finished the fourth set in 25-17 and captured the first match win at the best of five in the semi-final round.

“It was a tough win for us. We met strong resistance from Jiangsu and fell behind in the first two sets but we survived. Our new member Zheng Yixin did well in attacking and our blocking in the fourth set helped us win the match. We will fight match by match to our best.” commented Chen Youquan, head coach of Tianjin.

Li Yingying scored a match-high 27 points for Tianjin and was awarded the MVP of the match. Zheng Yixin, who transferred from Fujian before the semi-finals and Wang Yuanyuan similarly contributed 14 points for the home victory. On the other side, Rio Olympic gold medalists Zhang Changning and Gong Xiangyu scored 19 and 18 points respectively for Jiangsu.

In the other semi-final encounter, Margaret Rachel scored a match-high 24 points to help Beijing Auto claim a comfortable 3-0 (25-16, 25-18, 25-19) victory over the visiting Shanghai. However the MVP award went to Ding Xia as she vitalized the whole team with her combination. Liu Xiaotong also contributed 18 points. Shanghai Bright Ubest were totally suppressed by the opponent’s attacks and failed to find a way to blow back even if they sent the veteran Zhang Lei to the court in the third set. The best scorer of Shanghai went to Yang Jie, who only sneaked 11 points followed by Hu Mingyuan with 10.