The schedule for the pool phase of the beach volleyball tournament at the Olympic Games Tokyo 2020 has now been confirmed after a draw held in Moscow, Russia on July 5 split the 24 teams per gender into six pools.

Miki Ishii and Megumi Murakami will represent host country Japan in the first match on July 24 when they take on Czech pair Barbora Hermannova and Marketa Slukova. That encounter will be followed by Brazilian Rio 2016 gold medallist Alison Cerutti taking to the court with his current partner Alvaro Filho for the first men’s match of the tournament, against South American rivals Julian Azaad and Nicolas Capogrosso of Argentina.

The beach volleyball event at the Tokyo Olympics will be held at Shiokaze Park with pool phase matches taking place from July 24 to 31 beginning at 9.00 local time (0.00 GMT). The last match on each day will start at 22.00 local time/13.00 GMT. 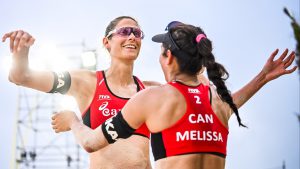 Reigning world champions Sarah Pavan and Melissa Humana-Paredes of Canada will play their first match on the opening day of the tournament at 12.00 local time against Olympic rookies Katja Stam and Raisa Schoon of the Netherlands. They will be followed on to centre court by Rio 2016 Olympic champion Laura Ludwig and partner Maggie Kozuch of Germany, who will begin their campaign in Tokyo against Swiss pair Tanja Huberli and Nina Betschart. 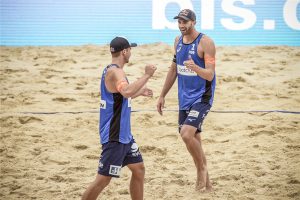 In the men’s competition, world ranking leaders Anders Mol and Christian Sorum of Norway will feature in the last match of the first day of action, against Australia’s Christopher McHugh and Damien Schumann. 2019 men’s world champions Viacheslav Krasilnikov and Oleg Stoyanovskiy of ROC will play their first match at 10.00 local time on July 26 against Mexicans Josue Gaxiola and Jose Rubio.

The 24 teams per gender are split into six pools of four teams each, with each team to play all the teams in their pool. The top two men’s and women’s teams from each of the six pools advance directly to each gender’s knockout matches along with the top two third-placed teams based on match points, set ratios and point ratios. The last four third-placed teams will play off for the last two berths in the 16-team elimination brackets. Men’s and women’s lucky loser matches will take place on July 31. The elimination round matches will follow from August 1 to 7 with the women’s medal matches to be played on Friday, August 6 and the men’s on Saturday, August 7.