Lausanne, Switzerland, July 22, 2019 – With the beach volleyball competition at the Tokyo Olympic Games a year away, the dress rehearsal for the 2020 Summer Games will be this week at Shiokaze Park in the Japanese capital city.

The Tokyo Open will test selected organizational aspects associated with the 2020 Olympic beach volleyball competition. A qualifier will be played Wednesday for both men and women with eight pairs per gender advancing to Thursday’s opening main draw schedule that will follow the same 24-team format for the Tokyo 2020 Olympics.

With US$300,000 in prize money to be distributed, Tokyo Open will also serve as a qualifying tournament for the 2020 Summer Games. The winning teams per gender on Sunday will share the $20,000 first-place prizes and collect 800 Olympic qualifying points.

While the top-ranked players on the 2018-2019 FIVB World Tour are entered in Tokyo, the FIVB will join forces with the European confederation in staging a World Tour men’s only stop in Italy at Pinarella di Cervia starting Thursday and ending Sunday.

In World Tour action last week, the 32nd and 33rd men’s events, and 35th and 36th women’s events were held in Portugal and Canada where teams from Brazil, Canada, Russia and Switzerland topped the podiums in Espinho and Edmonton.

Russia’s Svetlana Kholomina and Nadezda Makroguzova won the weekend’s first gold medal in Espinho Saturday by defeating Kelly Claes/Sarah Sponcil of the United States in the finals.  The next day at the Portuguese coastal resort on the Atlantic Ocean, Alison Cerutti and Alvaro Filho defeated compatriots Andre Loyola/George Wanderley in an All-Brazilian finale. 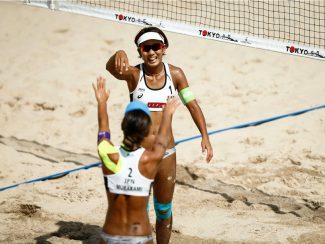