With only top four teams from each pool in the women’s event and top two from each men’s pool through to the next round, the continent’s top-tier competition became more intense on Wednesday when all participating teams went all-out and strived to make it to the elimination round of last 16. Thailand’s medal hopefuls Varapatsorn and Thanarattha enjoyed two wins in a row in Pool A on the previous day but hit a snag with their game plan when Kazakh young guns Alina Rachenko/Anastassiya Ukolova, who teamed up for the first time this year, turned the heat on the veteran Thai tandem to pull out a surprise 21-17, 21-17 win, handing the top seeds the first loss in the highly-anticipated annual Championships on their home soil. 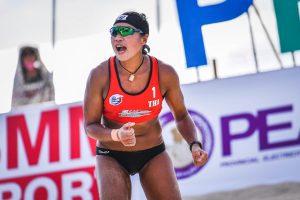 “We made several mistakes in this match and that cost us dear. However, win or lose, it’s not a big deal as we still keep our hopes of advancing alive. We will play our last match on Thursday against Australia in Pool A and although we finish either second or third in the Pool, we still progress to the next round for sure,” a confident Thanarattha said.

“The Australians are tall, but I think, less agile. We have to play our game and do our best to beat them,” teammate Varapatsorn added.

Varapatsorn and Thanarattha picked up silver at the Asian Championships twice in 2013 and 2014 aside from claiming silver at the 2014 Asian Games in Incheon, Korea. The two veterans remain major forces for Thailand to be reckoned with in the upcoming tournaments including the next year’s SEA Games in Vietnam and the Asian Games in Hangzhou, China.

As the Thai top seeds suffered a sudden slump, the other strong teams made their mark and remained on course for the eventual title. 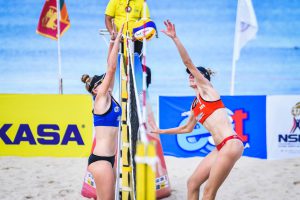 Teammates and third seeds Akiko Hasegawa/Yurika Sakaguchi followed suit with a clean sweep in Pool C. The Japanese duo proved too strong for Chong Eliza/Koh Chloe Tze Ning to brush off the unfancied Singaporeans 21-12, 21-10 in 32 minutes. Sixth seeds Shaunna Polley and Alice Zeimann, who last month captured the FIVB One-Star event in  Cortegaca, Portugal, also proved a tough nut to crack in Pool C as the Kiwis continued their unbeaten streak. Following their similar three successive wins, Polley/Zeimann and Hasegawa/Sakaguchi will battle it out in their last preliminary match on Thursday to determine the Pool C winners. Japanese Asami Shiba/Takemi Nishibori and Thailand’s Taravadee Naraphornrapat/Worapeerachayakorn Kongphopsarutawadee similarly clinched two wins to remain unbeaten in Pool D. Both teams will fight it out on Thursday for the Pool winners.

After two days of the pool round-robin preliminaries, Australians Bell/Johnson stayed atop Pool A with 6 points from 3 wins, while Japanese Ishii/Mizoe dominated Pool B with 6 points from three straight wins without losing a set. Meanwhile, in the men’s event, top players lived up to expectations to make a clean sweep and top their pools. Thailand’s top seeds Banlue Nakprakhong/Surin Jongklang ended their first-round campaign on Wednesday after winning both matches to top Pool A as expected. After a 2-0 demolition of Iranians Shekarsaraej Sina Shokati/Aro Mojtaba the previous day, the Thai duo on Wednesday made it two in a row following a convincing 21-16, 21-16 win against Kazakhs Aldash Nurdos/Petrossyants Artem. Qataris Cherif Younousse/Ahmed Tijan, current No.1 in the FIVB World Ranking and bronze medallists at the Tokyo 2020 Olympic Games, faced no issues in shutting out Kazakhstan’s veteran Alexey Sidorenko, who teamed up with Alexandr Dyachenko to emerge as the Asian champions in 2013, and Kirill Gurin 21-15, 21-9. With two consecutive wins, the superb Qatari duo captured the Pool B top spot. Another Australian team, Izac Carracher/James Takken and Thailand’s Kitti Duangjinda/Phanupong Thanan claimed one win apiece and will battle it out on Thursday to determine the Pool E winners. Japan’s Takahashi Takumi/Hiroshi Murakami suffered two straight losses and are on the brink of crashing out of the Championships. Only two teams are in Pool H and following the Wednesday’s comeback 13-21, 21-16, 21-19 win against Japanese Ikeda Jumpei/Katsuhiro Shiratori, Qataris Ahmed Mahmoud/Saifeddin El Majid topped Pool H, but both teams advanced to the next round. The Championships continue through Saturday, November 27, when the eventual winners in men’s and women’s events will be crowned 2021 Asian champions. Accumulating AVC points and cash prizes of US$30,000 in total are also up for grabs.