TOP SEEDS CRABB AND GIBB ADVANCE TO QUARTER-FINALS AT SYDNEY

Sydney, Australia, March 8, 2019 – Top seeded pair Taylor Crabb and Jacob Gibb of the United States won their second round match on Friday and stayed on target for the men’s quarterfinals of the FIVB Beach Volleyball World Tour Sydney 3-star.

“It’s difficult to play in this tournament because there are really great teams,” Gibb said. “We are just excited to move on to Saturday and see whether we get to the medal rounds. That’s what our goal is and that’s what we’re headed for.”

Crabb and Gibb faced tough opponents in Gao Peng and Li Yang of China as the Americans struggled to close the opening set. They finally gained the two-point margin at 24-22 to snatch the first set win. In the second frame, the top seeds won the match at 21-17 by performing better and serving aggressively against their rivals.

“We served aggressively and got them into some trouble,” Crabb said. “We won the scrappy plays where everyone is running around. We came in and talked about wanting to win on those long plays.

“The conditions were tough out here because there was a lot of wind. We played a good, athletic team and they gave us a really good game. I am glad we pulled it off.”

The second-seeded Marco and Esteban Grimalt remained undefeated in the tournament after three matches, as the Chilean duo came up with another straight-set (21-15, 21-18) win against Austrian pair Tobias Winter and Julian Horl in the second round.

Russians Taras Myskiv and Valeriy Samoday likewise had easy victories in their three matches, including their 2-0 (21-17, 21-17) win over Brazilians George Souto Maior Wanderley and Thiago Barbosa.

John Hyden and Ryan Doherty and Stafford Slick and William Allen of the United States, Mart Tiisar and Kusti Nolvak of Estonia, Youssef Krou and Edouard Rowlandson of France, and Adrian Carambula and Enrico Rossi of Italy all won in tiebreakers to advance to the quarterfinals. 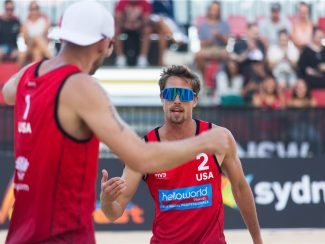