The presentation highlighted the collaboration between the Australian Olympic Committee and Volleyball Australia.

The Australian Olympic Committees’s Olympian Services Manager Daniel Kowalski OAM presented the Olympians with a certificate and an OLY pin.

The presentations take place at sporting events worldwide by Olympians, for Olympians, in recognition of being an Olympian for life.

TOP SEEDS CRABB AND GIBB ADVANCE TO QUARTER-FINALS AT SYDNEY 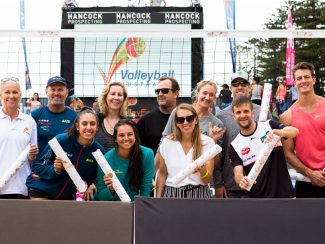