The Japanese pairs were in fine form as they bested their respective opponents in the pool play round.

Mizoe and Hashimoto topped Pool A with straight-set wins against Sweden’s Anniken Radstrom and Kristin Lind (21-14, 21-14) and Israel’s Sofia Starikov and Anika Dave (21-11, 21-16) to claim the first quarterfinal spot.

Kaho and Reika, on the other hand, won their opening match 2-0 (21-13, 21-9) against Scotland’s Lynne Beattie and Melissa Couts, before overcoming Paraguay’s Michelle Sharon Valiente Amarilla and Patricia Carolina Caballero Pena 2-1 (21-19, 16-21, 15-13) in their tough encounter in the second round.

The Japanese women will now wait for their opponents from the losers’ bracket who will play the remaining matches in the group stage and the round of 12 on Friday.

Joining the Japanese teams in the winners’ bracket are third seeds Julia Wouters and Katja Stam of the Netherlands and Manolina Konstantinou and Mariota Angelopoulou of Cyprus.

The Dutch and Cyprus pairs won all their matches in straight sets to move to the next round. 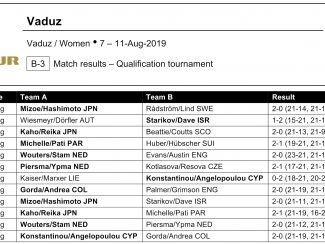 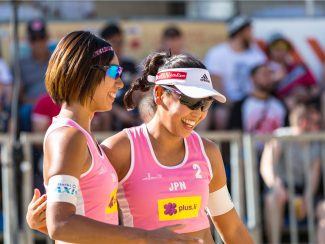