Azerbaijan’s Jana Kulan was again key to victories for the Toray Arrows this weekend.

Tokyo, Japan, December 2, 2020 – After Saturday’s matches, Toray Arrows were still perfect at 10 wins in their 10 matches played. JT Marvelous only had one loss in their 10 matches played and the two clubs were set to meet on Sunday in the last match of the first half of the Japanese V1 Women’s League season. It would be the first encounter of the season between the two opponents.

Potentially a JT Marvelous win in less than five sets would move them into first place. While if Toray won or pushed the match to five sets, it would see the Arrows maintain first place.

In the first set, Toray took a 14-9 lead through an Ai Kurogo spike. However, JT Marvelous had a 9-2 run to swap the lead and take an 18-16 lead, through two service aces in a row from Marvelous setter Mika Shibata. With the set tied at 20-20, two spikes each by outside hitter Mayu Ishikawa and opposite Jana Kulan for Toray gave the Arrows a 5-2 run to win the set 25-22.

The second saw JT Marvelous build a lead after the score was tied at 6-6. At set point for JT at 24-22, however, Kulan spiked to put off one set point. At 24-23, Kulan killed again to tie and push the set into extra points. A hitting error by Toray gave JT another chance at set point, its fourth, and Marvelous setter Aki Momii blocked Mayu Ishikawa for the point 27-25 and tied the match at 1-1 sets.

JT Marvelous kept their momentum at the beginning of the third set with a 4-0 start. Still, Toray tied the score at 6-6. Both teams continued trading points until 15-15. Then Toray went on a 7-0 including three kills each from Mayu Ishikawa and middle blocker Erina Ogawa, plus a kill from Kulan which gave the Arrows a gap to coast to the set win 25-18, Toray 2-1 sets.

With JT Marvelous on the ropes, Toray looked for the knockout punch. Tied at 10-10, a 10-3 run by the Arrows with kills from all Toray players on the court enabled the Arrows to coast to the set win 25-17 and the match 3-1 which put Toray in first place at 11-0 and a two-win lead over second placed JT Marvelous in the standings. With the top four teams making the Final Four playoff championship this season, the Arrows are four wins ahead of fifth place and are almost a lock for the Final Four.

Jana Kulan led the Arrows with 26 (two blocks and an ace) and had help from Ishikawa with 22 (one block) in the win. Annie Drews had 21 (one block) for the Marvelous in the loss.

Denso Airybees won both of their matches on the weekend – 3-2 against NEC Red Rockets on Saturday and 3-0 against Saitama Ageo Medics. The wins enabled the Airybees to tie NEC on record, points and set ratio at 8-3, 25 points and 2.00 sets ratio. NEC are in third place due to the points ratio tiebreaker, however, while Denso are in fourth. In the Saturday match, Turkey’s Neriman Ozsoy had 38 points (three blocks and two aces) in the loss for NEC. Denso middle blocker Mai Okumura had eight blocks (five against NEC and three against Saitama) over the weekend.

In Sunday’s match between Okayama Seagulls and Toyota Auto Body Queenseis, the five-set match went to extra points three times. Okayama had a 2-0 set lead, but Toyota took the third set 26-24, to pull one set back. In the fourth set, Okayama had match point at 24-23, but a kill by outside hitter Miyoko Yabuta kept the Queenseis alive. A second Okayama match point at 25-24, was held off by a kill from Thai setter Pornpun Guedpard for Toyota. An Indre Sorokaite block was followed by an Erika Araki block to give Toyota the set 27-25 and tie the match at 2-2.

In the fifth set, Toyota took a 12-8 lead through kills by Araki and Sorokaite. However, a 4-0 by the Seagulls tied the score at 13-13. Sorokaite scored to give the Queenseis match point at 14-13, but a Syuka Kaneda point tied the set at 14-14 for Okayama. Sorokaite and Kaneda exchanged kills to make it 15-15. Kaneda scored for Okayama to give them match point at 16-15. Toyota had two chances to tie but could not put the ball to the floor and Kaneda took the last swing of the match and Toyota could not dig it, 17-15 to the Seagulls, 3-2 sets. Kaneda finished with 29 points (four blocks) for Okayama in the win. Sorokaite for Toyota tried her best with 28 (3 blocks) to keep pace in the loss.

Lastly, PFU Blue Cats had a great weekend with their first win of the season on Saturday 3-1 against Hitachi Rivale and then following it up on Sunday with a 3-2 win against Victorina Himeji. The two victories enabled PFU to get out of last place, where they had been since their third match of the season. Venezuelan Roslandy Acosta was the star of the weekend for PFU with 27 points on Saturday and 31 (two blocks) on Sunday in the wins. For Hitachi in the loss on Saturday, Miwako Osanai had 32 (one ace) points in the loss for Rivale. 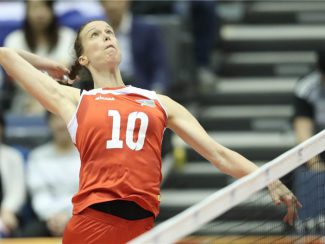