Hamburg, Germany, July 5, 2019 – Led by pairs from Brazil, Italy, Russia and the United States, 12 countries have teams remaining in the competition at the US$1-million FIVB Beach Volleyball World Championships presented by comdirect and ALDI Nord.

The four countries have a combined 16 of the 24 men’s and women’s teams left in the competition led by the Americans with six pairs (four men and two women) still competing. Russia has four tandems (3, 1) remaining with three each for Brazil (2, 1) and Italy (2, 1).

The 2019 FIVB World Championships conclude on Saturday for women and Sunday for men as the winning teams will share the $60,000 first-place prize and a berth for their country in the Tokyo 2020 Olympic Games.

Entering the final three days of play at Am Rothenbaum Stadium, the United States is the only nation guaranteed a spot in the final four at the 12th edition of the Beach Volleyball World Championships as two teams from the North American country play here mid-day Friday in the women’s quarterfinals.

The American winner will advance to a Friday evening semifinal against either seventh-seeded Mariafe Artacho/Taliqua Clancy of Australia or 14th-seeded Svetlana Kholomina/Nadezda Makroguzova of Russia. The Australian-Russian matchup is at 11:15 a.m. Friday as Kholomina and Makroguzova defeated Artacho and Clancy three weeks ago in Poland in the only FIVB match between the two teams.

Humana-Paredes/Pavan defeated the Italians eight-plus months ago in the United States at Las Vegas in the only FIVB World Tour meeting between the two teams. It has been two years since the Brazilians and Swiss have met internationally. In the only World Tour match between the pairs, Betschart and Huberli defeated Barbara and Fernanda for the bronze medal at the Porec Major in Croatia on July 1, 2017.

For Friday’s men’s schedule, the top three seeded teams are still competing along with former world champions Alison Cerutti (2011 and 2015) and Andre Loyola (2017) of Brazil and American Phil Dalhausser (2007). Alison (2016) and Dalhausser (2008) also have Olympic gold medals to their credit.

Top-seeded Anders Mol/Christian Sorum of Norway will be challenged by 23rd-seeded Martins Plavins/Edgars Tocs of Latvia at 4:45 on the Rothenbaum centre court with second-seeded Michal Bryl/Grzegorz Fijalek of Poland playing Andre/George Wanderley of Brazil at 1:45 on a side court. Andre captured his World Championship gold medal with Evandro in 2017 at Vienna. 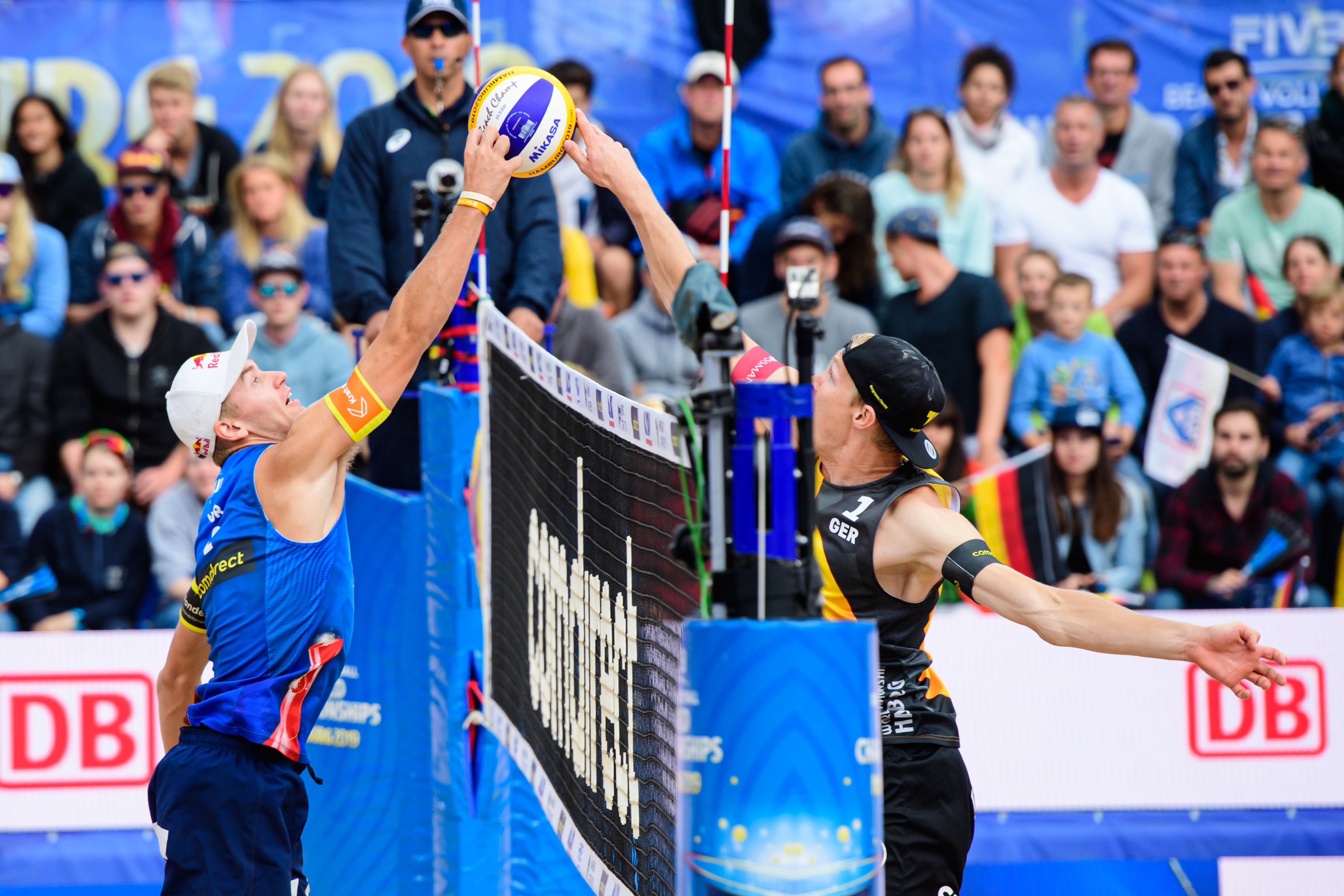 Third-seeded Viacheslav Krasilnikov/Oleg Stoyanovskiy of Russia meet seventh-seeded Taylor Crabb/Jake Gibb of the United States at 1:45 p.m. on the centre court. With three match victories with Crabb at the 2019 Worlds, 43-year old Gibb is the third oldest men’s player to win a match at the FIVB World Tour World Championships.

Alison, who topped the World Championship podium in 2011 with Emanuel Rego and 2015 with Bruno Oscar Schmidt, and Alvaro meet the last German team remaining in the competition in a 6 p.m. centre court match against 12th-seeded Julius Thole and Clemens Wickler. 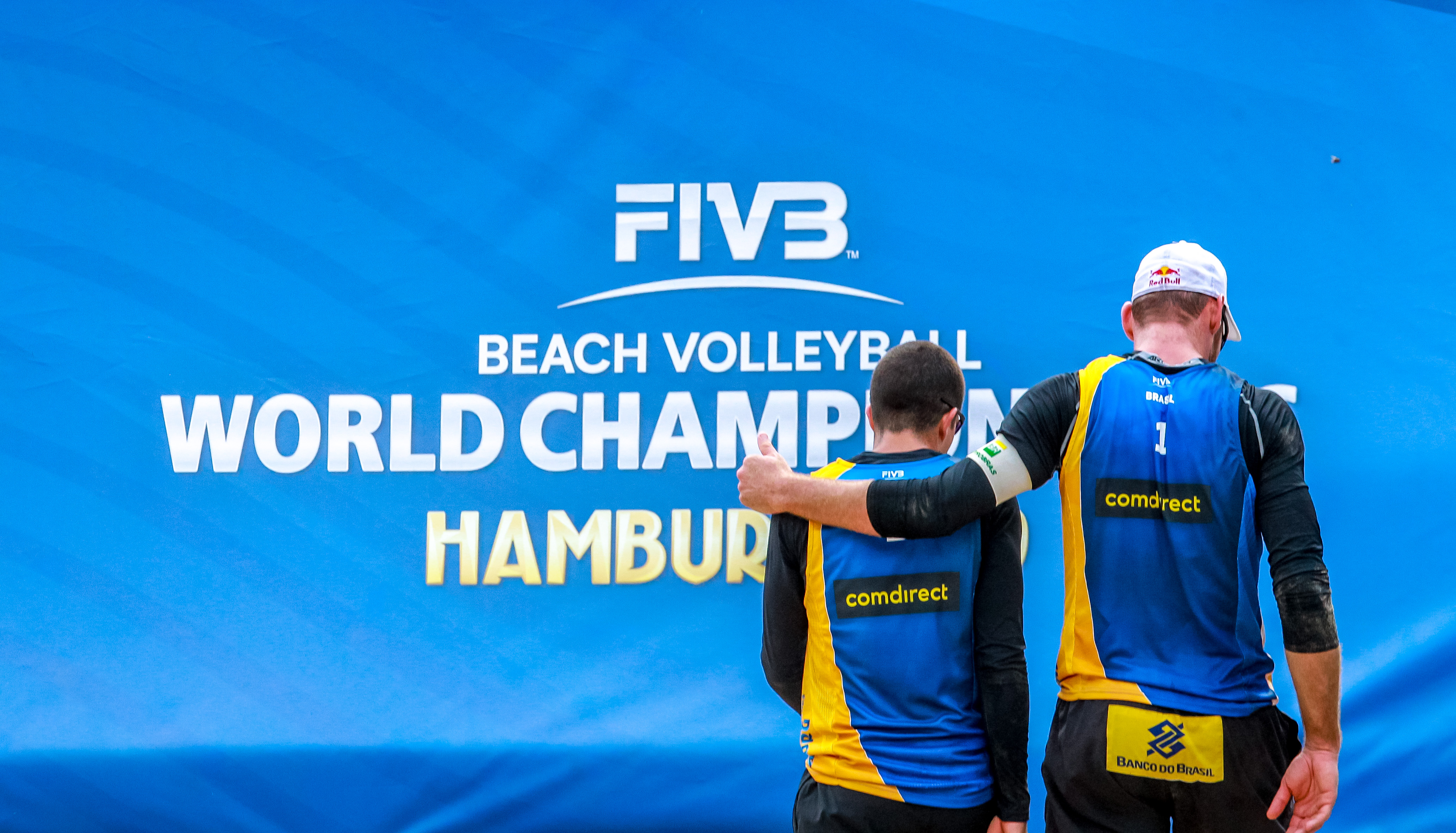 The sixth-seeded Dalhausser and Lucena will be challenged by 15th-seeded Nikita Liamin of Russia at 6 p.m. on a Rothenbaum side court.  Dalhausser, who captured his world and Olympic gold medals with Todd Rogers, and Lucena have also topped FIVB World Tour podiums at Rothenbaum in 2016 and 2017.

Lupo and Nicolai are the silver medal winners from the Rio 2016 Olympic games while Carambula and Rossi were a late entry into the 2019 FIVB World Championships after a withdrawal of a team from Sierra Leone.  Semenov placed fourth in the Rio Olympics with Krasilnikov with Trevor Crabb the older brother of Taylor Crabb.

Finally, April Ross is no relation to Summer Ross!  However, April Ross did capture an FIVB World Championships gold medal with Jen Kessy 10 years ago in Stavanger, Norway. Kessy is now coaching her former partner and Klineman.

CHIYO AND SAKAGUCHI LEAD WAY FOR JAPANESE TEAMS IN QIDONG 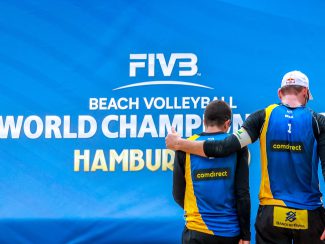 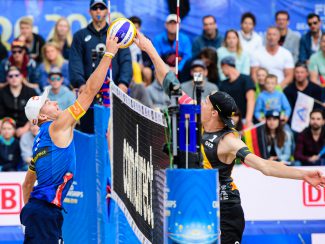 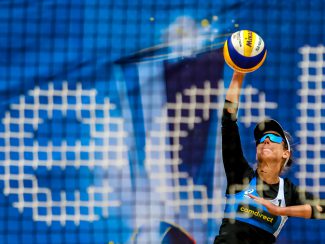 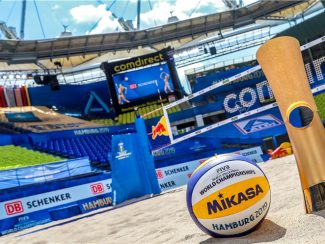