Volleyball’s flagship event returns in 2023 when Volleyball Nations League (VNL) arrives in venues across Asia, Europe, North America and South America. On the heels of revealing host cities for the preliminary competitions, today VNL announced the United States and Poland will host the women’s and men’s finals, respectively. Eight elite women’s teams will battle for the title in Arlington, Texas July 12-16, 2023 at College Park Center while the men’s competition takes place July 19-23, 2023 at Ergo Arena in Gdansk.

VNL promises to bring the best live sport to some of volleyball’s most passionate and biggest communities. All matches will be broadcast live and on-demand on Volleyball TV as well as domestic broadcasters, across the globe.

“Fans watching from around the world will get a unique taste of the volleyball atmosphere that the United States and Poland have to offer, and we can’t wait to see which teams make it to the finals in these great arenas next year,” says Volleyball World CEO Finn Taylor. “Poland and the United States are fanatical for the sport so we could not think of better locations to host the finals in 2023.”

International Volleyball Federation (FIVB) President Dr Ary S. Graça F° says, “The VNL continues to wow fans across the globe with a diverse and strong line-up of hosts, and this is testament to the global popularity of our sport. Both Poland and the USA are leading volleyball nations with passionate fans, and incredible stories are ready to be told. Can the Poland men’s team win its first-ever VNL gold, and can the USA women’s team claim its fourth title on home soil? With so many strong national teams across the world, we can all look forward to intense, fierce and exceptional volleyball action during next year’s VNL.” 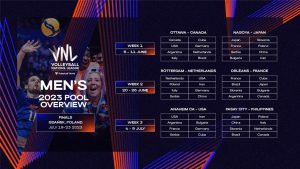 The current schedule is as follows: 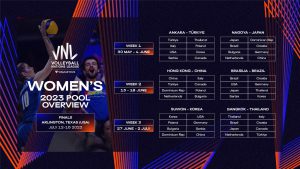 Volleyball World is a new partnership between the FIVB and the CVC Capital Partners aimed at driving growth, innovation, and investment in volleyball around the globe. Its goal is to create an integrated ecosystem connecting all volleyball stakeholders (fans, athletes, corporate partners) together through both digital and live events. Volleyball World is responsible for the commercial operation of key volleyball and beach volleyball international events, including: the World Championships, Volleyball Nations League, Olympic Qualifiers and Beach Pro Tour.